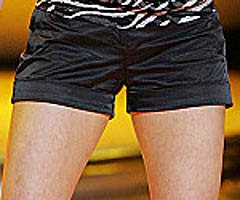 OK. This really upsets me. Last season, everybody was all cutesy in saying that fans of Katherine McPhee had caught the McPheever (or McPhever). Why did it take me until this week to realize that fans of Haley Scarnato has developed a bad case of Haley-tosis? If only I'd realized this a month or two ago, there could have been guys in the audience with signs reading "Kiss me -- I have Haley-tosis." But nooo... Now I have this pointless brainwave and it's too late.

Above, you'll notice a picture of Haley Scarnato's short-shorts. I cut the picture for my Zap2it "Idol" recap, which covers the events leading up to Haley's departure from this season's "American Idol." I use the short-shorts image to represent Haley. The English major in me calls it synecdoche, but the comics reader in me compares it to the way Garry Trudeau has let feathers and waffles stand in for reason presidents.

Is it a coincidence or irony that in this week, when the "Idol" contestants were mentored by that paragon of style-over-substance Jennifer Lopez, the contestant who went home was the most aesthetically pleasing?

I have very little to say about this, though faithful readers know that I've been a devoted Haley booster all season. It's not that I think Haley can sing, but it isn't like she *can't* sing. She just made the correct decision when we reached the Top 12 that her only chance of survival was based on marketing her attractiveness over her talent.

Haley was never going to win and I didn't want her to win, but as long as we still have Phil and Sanjaya, I'd just like to state a preference for Haley. Is that so wrong? It would have been semi-ironic for Sanjaya to go home after giving his best performance of the competition, but I wish I knew what's keeping Phil around. He also isn't horrible or anything, but he main hook is that he's the slightly creepy, bald family man. Is that what teenage girls today are looking for?

And next week is Country Week, which is going to be just awful for fading leaders Melinda and LaKisha, but probably would have been "great" for Haley.

Oh well. I doubt the pain here will stay with me for very long.

And can we just say now that Jordin and Blake are heading for the Finals? You can sense it. It's in the air.
Tweet