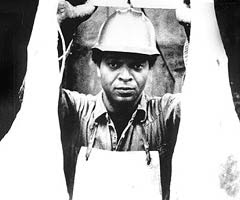 "Killer of Sheep"
Director: Charles Burnett
Fien Print Rating (Out of 100): NA
In a Nutshell: So I kept telling people all week that my big plan for the weekend involved getting out to the NuArt and seeing Charles Burnett's "Killer of Sheep," and to a person, everybody I mentioned this to said, "Oh, that's that movie about the killer sheep from New Zealand?" (or some variant joke about literally killer sheep). That, of course, is the reason why I had to get out to see it, the reason I ended up seeing it by myself and the reason I'm not bothering to give the film my standard Fien Print Rating.

"Killer of Sheep" is just a movie that people ought to see and while I don't mean that watching Burnett's 1978 UCLA thesis film is like taking medicine, it's a lot harder to evaluate the movie on the basis of what it *is* than on the basis of what it *represents*. If you approach it on the same level you'd approach, say, "Grindhouse," you might whine about the muddled soundtrack, the non-existent narrative or an assortment of performances that often don't even reach the level of amateurish (and therefore aren't naturalistic either). But "Killer of Sheep" is an utterly unique piece of American cinema, the kind of amorphous tone poem of a movie that even the people obviously influenced by Burnett -- Spike Lee, Jim Jarmusch, Julie Dash, David Gordon Green -- haven't *truly* attempted to follow in his footsteps. "Killer of Sheep" is more Cassavetes than Cassavetes and more neo-realism than most works of Italian neo-realism. Even Burnett has imposed greater narrative constraints on himself in subsequent films ("To Sleep with Anger," "The Glass Shield"). So "Killer of Sheep" is unique.

All you have to know is that you've never seen anything like "Killer of Sheep" before. Set in Watts in the mid-70s, it's like an anti-blaxploitation movie, in which the hoods and criminals are pushed to the background and the focus is on one beaten-down family man (Henry G. Sanders) who works in a slaughterhouse and has, at least according to his wife, simply stopped smiling. But the movie finds light, humane, bittersweet humor in even the deepest valleys of these characters' lives -- a paycheck that turns into an ill-fated replacement motor, a car trip to the racetrack to bet on a sure thing. And despite a budget that must have been pocket change, Burnett brings understated black-and-white beauty to every close-up and to every moment -- a couple dancing to a single record track, the somtimes violent games that kids play. The film's soundtrack of standards and pop tunes from the time are part of why "Killer of Sheep" was unable to get theatrical release previously, but it also adds to its timelessness.

I'm doing an awful job of explaining the reasons for appreciating this movie, which is probably why I opted out of giving it a rating. It's just a movie worth seeing if you ever have the opportunity, since opportunities to see it are few and far between.
Tweet