Quick Thoughts on Gina Getting Sanjayaed from "Idol" 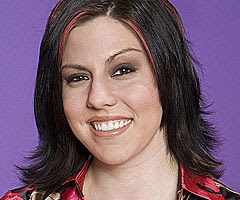 Gina Glocksen was eliminated from "American Idol" on Wednesday (April 4) night, but who cares about *that* really?

Reuters leads its "Idol" elimination story with the most important fact: Sanjaya Malakar is still around. The Associated Press' main "Idol" story focuses a bit on Gina, but it's already queued up behind a much more amusing report from New Delhi about how true Indians (dot, not feather) have yet to embrace Sanjaya.

And both stories make it clear that *some* "Idol" fans fear that if Sanjaya stays in the competition any long, the show will lose all credibility. Chortle. We *are* talking about the same "American Idol" right? The show where Nikki McKibbin, Justin Guarini and R.J. Helton beat Tamyra Gray in the first season? The show where goat-voiced Carmen Rasmussen, tone-deaf John Stevens, Rose Bowl star Matt Rogers, future movie star Kevin Covais and flower-in-her-hair Vegas star Jasmine Trias had runs of varying lengths? It happens every season. Democracy is weird. Get over it.

The vitriol for Sanjaya is based largely on talent, or lack thereof. I don't question that. But none of those previous "Idol" debacles stirred anywhere near the outrage Sanjaya is generating. People who pay no attention to the show know that they're supposed to care that Sanjaya is destroying "American Idol" (and, truth be told, the show's ratings are sliding, albeit not so badly that anybody will complain yet). But very few people are reporting on the not-so-vaguely racist component to the anti-Sanjaya hatred. Sanjaya's name is easy to spell, both first and last. It's 100% phonetic, yet Internet messageboard detractors take endless pleasure in spelling it wrong, pretending not to be able to spell it, or purposely calling him "Sanjay," because that's a name for other self-mocking Indians in pop culture. While Jasmine's "Idol" run prompted talk of a Hawaiian conspiracy, nobody worried about Middle American white folks banding together to vote for Kevin (or that a weird French-Canadian voting bloc somehow assumed he was one of them because of his last name). But with Sanjaya, the same recycled jokes about "I think switchboard operators in India are voting for him" keep popping up, with every poster thinking they're being clever. Morons. Heck, Sanjaya's half-Italian, but nobody has suggested a Papist conspiracy yet, have they? The Italian side of him isn't notable enough to be mentioned, apparently. Regardless, though, there's something about Sanjaya that makes him more threatening to simple-minded "Idol" fans than other equally bad dilettantes before him.

Sanjaya is going forward because he generates both love and hate. Brandon, Stephanie, Chris Sligh and now Gina are going home for not generating sufficient quantities of either. If Gina could have done the Johnny Rotten version of "My Way" and lurched around the stage in high boots and a scooped out top this week, she'd probably have stayed. The judges made it clear to her over and over again that that was what they expected of her, that they required her to provide the musical diversity that they hadn't bothered to bring into the competition this season. It didn't matter that she was just a cut-rate Storm Large from "Rock Star." That's what Simon, Randy and Paula needed her to be. They didn't need her to be a bland, but competent singer of bittersweetly hopeful Charlie Chaplin ballad. And her punishment for failing to meet their expectations was elimination. Say what you will about Sanjaya or Haley Scarnato, but if the judges have expected them to deliver weekly doses of Freak Show and Eye Candy, they're delivering.

On the bright side, next week's show should be an utter train-wreck. Our gang is ill-suited for Latin Night to begin with, but what improvements could musically challenged guest mentor Jennifer Lopez possibly provide? Or maybe J-Lo will just ask each of the "Idol" contestants for singing advice? Will Haley just sing in a bikini and be done with it? Will Sanjaya decide to do "She Bangs" and confirm his slump into William Hung-hood? And how many licks *does* it take to get to the Tootsie Roll center of a Tootsie Pop?