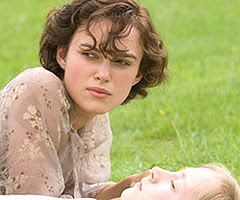 I meant to get to this yesterday, but between computer problems, the Mitchell Report, an office lunch and general exhaustion, I failed.

The Golden Globe nominations are always a good chance to look at the state of affairs when it comes to Oscars, but also to mock the Hollywood Foreign Press, so I'll do that.

Since my Zap2it colleague Rick took the trouble to format the nominees, I'll just react to everything as best as I can after the bump. I guess this'll be long. And probably pointless. They *are* just the Golden Globe nominations after all...

I've split my reactions into movies and TV nominations. The movie nomination reactions are below. The TV reactions will be in a different post. Maybe later today, maybe over the weekend.

REACTION: Seven nominees? Way to go out on a limb. I haven't seen "The Great Debaters," but I have friends who assure me that it has no place on this list. I know that "American Gangster" doesn't belong here. And as much as I'd never hesitate to salute David Cronenberg, "Eastern Promises" falls apart in the end and isn't really worthy of its place. It's a good race between "Atonement" and "No Country For Old Men."

REACTION: Problem: I desperately want to make fun of the selection of "Across the Universe" here, because the trailers were so very bad, but I haven't seen the movie. So I can't. Fortunately, I've seen "Hairspray," so I'm comfortable saying that that slot could have been better occupied by "Waitress," "Once," "Knocked Up," "Superbad," "The Hoax," or even "The Savages." "Sweeney Todd" probably wins here, though this could be a good test of the dark-horse status of "Juno."

REACTION: Looking forward to seeing "There Will Be Blood" and nothing I've seen from the trailers do anything to indicate that Day-Lewis isn't, as always, award worthy. Clooney and McAvoy have a similar Old Hollywood star power that anchors their movies. As much as I'd have removed "Eastern Promises" from the picture field, I'm glad to see Mortensen here. That leaves Denzel Washington for the overhyped, overrated "American Gangster." It's a fine performance but nothing in it offers anything that we haven't seen Denzel do a dozen times. Folks I'd have wanted to see nominated in Washington's place could have included Philip Seymour Hoffman ("Before the Devil Knows You're Dead"), Josh Brolin ("No Country For Old Men"), Christian Bale ("Rescue Dawn"), Joseph Gordon Levitt ("The Lookout"), Joaquin Phoenix ("We Own the Night"), Gordon Pinsent ("Away From Her") and maybe even Emile Hirsch ("Into the Wild"). I'm also not sure which categories Russell Crowe ("3:10 to Yuma," *not* "American Gangster") and Chris Cooper ("Breach") were submitted for, but whether supporting or lead, they deserved consideration. I figure Clooney upsets Day-Lewis here, because the Globes lurv him.

REACTION: Because the musical/comedy field is extra strong for actresses this year (more on the misplaced Marion Cotillard later), the actress-drama category is extra weak this year, hence Blanchett and Foster for movies that people hated and Knightley for a good performance that isn't the sort of thing award-watchers usually remember. Thinking back over the year, I have a difficult time thinking of other performances that even deserve to be here. Christie probably wins, but don't under-estimate the HFPA's love for Jolie.

REACTION: I probably need to go see "Lars and the Real Girl," don't I? Sigh. Don't feel like it! This category is strange because "The Savages," as I've said before, isn't really a comedy and although funny things happen to Hoffman's character, his isn't a comedic performance. It's a very good performance, but he isn't doing the same things as Hanks or Reilly or Depp. I'd personally have replaced Hanks with Glen Hansard ("Once") or possibly Richard Gere ("The Hoax"). From what I can guess, the other four nominees are really just fodder for Depp anyway. He can't possibly lose. 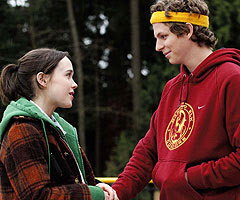 REACTION: It wasn't that hated "Hairspray," but this category realistically had four locked-in nominees, with one free-floating spot. It went to Nikki Blonsky solely for being exuberant. It's here that I'd have rather seen Keri Russell ("Waitress"), Marketa Irglova ("Once"), Katherine Heigl ("Knocked Up") or, particularly, Laura Linney ("The Savages"). Don't get me started, though, on Marion Cotillard's presence here. Not only is "La Vie en Rose" not a musical, but Cotillard just lip-synched her role anyway, so if the movie *were* a musical, she wouldn't have anything to do with its musicality. The Globes *love* coronating Hot Young Things and Amy Adams is this year's Hot Young Thing. Unless Ellen Page is this year's Hot Young Thing. Could be interesting!

REACTION: It can never be said enough: The Golden Globe voters are -- pardon my vernacular -- star-fuckers. Otherwise there can't be any justification for including John Travolta's mediocre "Hairspray" performance, in which he spoke with one horrible Baltimore accent and then sang in a different voice entirely. If it was a weak year for supporting performances, that would be one thing, but this is the category where we could have had Hal Holbrook ("Into the Wild"), Tommy Lee Jones ("No Country for Old Men"), Philip Bosco ("The Savages"), Irfan Khan ("The Namesake"), J.K. Simmons ("Juno"), Robert Downey Jr. ("Zodiac"), Ed Harris ("Gone Baby Gone") or Ethan Hawke ("Before the Devil Knows You're Dead") and that's just off the top of my head. I'm gonna be rooting for Bardem and Hoffman here, but I wouldn't complain about Affleck.

REACTION: Roberts' inclusion is another example of pure-and-simple star-fucking. She's not bad, but she doesn't belong. I also can't really imagine Saorise Ronan getting an Oscar nomination, though I thought she was perfectly worthy, as such things go. The race between Blanchett, Ryan and Swinton may be one of the night's most interesting. Blanchett has the star-power, but Ryan has been scooping up the awards by the dozen. Who else might I have liked to see recognized? Jennifer Jason Leigh ("Margot at the Wedding"), Kelly MacDonald ("No Country For Old Men"), Marisa Tomei ("Before the Devil Knows You're Dead") or Jennifer Garner ("Juno").

REACTION: Because the Globes split dramas, musical-comedy and foreign into never-the-twain-shall-meet categories, the melting pot screenplay and director categories are always more interesting and crowded and usually do a better job of foreshadowing the Oscars. In this case, Ridley Scott's inclusion is comical. Not having seen "There Will Be Blood," I can't guarantee that Paul Thomas Anderson's directorial craft is superior, but I'm gonna just make that assumption, eh?

REACTION: These will eventually be split out into adapted and original screenplays for the Oscars and that's, you know, the sane and reasonable thing to do. How do you compare the Coens' ultra-literal adaptation of "No Country" to Cody's linguistically marvelous, structurally familiar "Juno"? And how do you grade Sorkin for the cushy, light-minded version of "War" that made it to theaters or for the far tougher, far more political script he actually wrote? And how could this list possibly not include Tony Gilroy's "Michael Clayton" script?

"That's How You Know," from "Enchanted"
"Grace Is Gone," from "Grace Is Gone"
"Guaranteed," from "Into the Wild"
"Despedida," from "Love in the Time of Cholera"
"Walk Hard," from "Walk Hard: The Dewey Cox Story"

REACTION: My motto is that as long as "Lyra" from "The Golden Compass" and that awful Annie Lennox thing from "In the Valley of Elah" aren't nominated, it's all good. That being said, surely there ought to have been room for a song from "Once." This is one of the categories that the Golden Globes are notoriously far separate from the Oscars on.

REACTION: Dario Marianelli's score for "Atonement" is brilliant. Alberto Iglesias' score for "The Kite Runner" is comically cheesy. I really liked what Carter Burwell did on both "The Hoax" and "Before the Devil Knows You're Dead." Somehow Burwell has never been nominated for an Oscar. I don't get that.

REACTION: No "Beowulf"? Vaguely interesting. "Persepolis" wasn't eligible, so don't read anything into this.

"4 Months, 3 Weeks and 2 Days"
"The Diving Bell and the Butterfly"
"The Kite Runner"
"Lust, Caution"
"Persepolis"

REACTION: "The Kite Runner" doesn't really belong here, but the Golden Globes have weird eligibility rules. Finally gonna go see "The Diving Bell and the Butterfly" this weekend. As it is, I've been very poorly behaved when it comes to foreign language movies this year. Where's "The Orphanage," darnit?