MovieWatch: "Lars and the Real Girl" 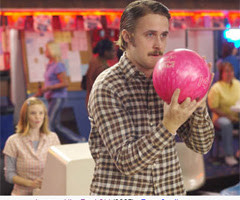 "Lars and the Real Girl"
Director: Craig Gillespie
Fien Print Rating (Out of 100): 67
In a Nutshell: [Side note: This is gonna get written up in a dozen trend pieces by Monday, but since I haven't seen it anywhere, I wanna get it out there: There have been plenty of small-screen casualties of the writers strike already, but the Judd Apatow produced "Walk Hard" is the first big screen product to whither because of the strike.

It was partially Sony's mistake, releasing "Walk Hard" at a time when the movie was never going to be able to generate maximum buzz anyway. Sony got cocky about the power of the Judd Apatow name, which isn't, it turns out, 100% magic. Duh.

But "Walk Hard" never stood a chance because it was too hard to market based 100% on TV ads. People didn't have a clue what the mockumentary was supposed to be, how they were supposed to response. You know what would have helped? John C. Reilly on every talk show in America, both as a guest and performing songs from the movie. How about John C. Reilly as host of "Saturday Night Live" with musical guest Dewey Cox. Maybe a surprise Reilly cameo with Jenna Fischer on "The Office"?

Things like "I Am Legend" and "National Treasure 2" and "Alvin and the Chipmunks" and even "Enchanted" sell themselves. Even "Enchanted," though... Nobody's going to say it, but that movie hasn't come close to performing up to the standards set by something like "Night at the Museum" last year. That movie should have started playing at Thanksgiving and by Christmas it should have been over $200 million, but instead it's going to top out at $120 million, even if it gets a holiday bump. Based on cost and advertising, "Enchanted" isn't a smash hit at all, regardless of what media reports might have suggested. But if Amy Adams had been able to run the late night gauntlet, that movie's awareness would have been far better. I hate to say it, but for a movie like "Enchanted," that difference in box office isn't just about money, it's about whether or not Adams receives an Oscar nomination. After its first weekend, I'd have told you she was a sure thing. Now? Doubtful.

Would "The Golden Compass" have tanked somewhat less if Dakota Blue Richards had gotten to sit down next to Letterman and Leno? I doubt it, but it wouldn't have hurt. Getting Gerard Butler out there for "P.S. I Love You" would have helped that movie and Tom Hanks is always gold on the late night circuit and it looks like "Charlie Wilson's War" could have used a bit of a boost.]

Anyway, follow through after the bump for my thoughts on "Lars and the Real Girl," since that's what the blog subject line promised...

I was telling a friend last night that "I Am Legend" was a great movie to see alone, or perhaps just accompanied by your friendly German shepherd. "Lars and the Real Girl" is another mighty good alone movie, particularly when seen in the Landmark Theatre's living room screening room, where my nifty little love seat might have been perfectly shared with a life-sized sex doll.

I'd sort of held off on seeing "Lars and the Real Girl" for fear that it might come across as both unnecessarily twee -- finally a chance to use that word outside of the context of "Pushing Daisies" -- and out of fear that Gosling's inevitable actorly affections might irk me. I mean, nobody's arguing that Gosling's one of his generation's very best actors, but nothing he does a thespian is invisible. You're constantly aware that he's put a lot of effort into creating a character, even if it's in something as forgettable as "Fracture." So I was a bit concerned that Gosling playing a twitchy, mustached outcast might be more than I could handle.

Ultimately, "Lars and the Real Girl" wasn't even vaguely troubling or offensive or disturbing (the latter perhaps to its detriment). It was sweet, touching and mighty slight, though all of the actors -- from Gosling on down -- do admirable and watchable work.

I wrote my first casting stories about "Lars and the Real Girl" for Zap2it in the late summer of 2006 and it was hard not to be amused by the premise, described as the story of "a lonely man who falls in love with a doll he finds on the Internet."

Under normal circumstances, Nancy Oliver's script probably would have gone one of two directions: If it ended up in the hands of, say, the Farrelly Brothers, some of it would have been rewritten, but the result would have been a raunchy, R-rated lark with almost the exact same structure and concluding sweetness, but a lot more references to vacuum sucking action and precision molding. Or, if it had ended up in the hands of, say, Eli Roth, the main character's doll -- a wheelchair-bound beauty named Bianca -- would have eventually encouraged Lars to start killing people so that they could be together forever, like Anthony Hopkins' character in magic.

In the hands of Craig Gillespie -- whose only other feature credit was a 90-minute movie spun out of the lone joke that it's antagonist's last name was "Woodcock" -- what it ultimately settles for is to be a saccharine fable with an interesting enough psychological underpinning that's finally less important than the Capra-esque theme about communities banding together to support the individual. "Lars and the Real Girl" is about one man's internal fantasy, but anybody watching the movie is likely to think that the whole film is set in a fantasy land.

Some of the more boorish characters make a joke about how Bianca's the perfect woman because she can't talk back. That vein of misogyny vanishes pretty early because you never doubt that the doll is sort of being used as pneumatically sculpted set of training wheels for the inevitable real girl, played by Kelli Garner.

While there are several references to the doll's anatomical correctness, she's almost immediately desexualized. From the first time she's introduced, Lars goes out of his way to make her stay with his brother and sister-in-law just so that there can never be any consideration that he's using the doll as anything other than a romantic surrogate. While she arrives dressed like a tawdry call girl, she's quickly redressed to the standards of bland upper Northwest asexuality and although she's initially made up like a bit of a tart, her painted face is as flexible as her body and by the end she isn't wearing any make-up at all. Her threat to the community, in fact, is almost entirely governed by her degree of sexuality, but by the end of the movie, Bianca is almost interchangeable with the main character of "The Diving Bell and the Butterfly."

[Oye, I could go on with the comparison between "Lars and the Real Girl" and "The Diving Bell and the Butterfly" -- a treatise on the ways in which people read their own values and desires onto largely inanimate objects, but that might get too problematic and over-intellectual.]

The fact that nobody views Bianca as a sex doll after the initial description saves Oliver and Gillespie from getting into any sort of murky water. My initial guess, upon Bianca's arrival, was that what it would take to shake Lars out of his spell would be him catching somebody using Bianca for her God-created purpose. It's a bit astounding that the filmmakers never go anywhere near that direction. Because Lars obviously isn't having sex with Bianca and because no other man thinks to experiment on her, she can be safely pushed aside as a longterm threat. Garner's Margo may be a bit awkward, but she's still played by Kelli Garner -- albeit Garner in her indie "I'm wearing no make-up so you might believe me as anything other than a pillow-lipped bombshell" mode -- so you know that she can do better than Lars. This is a bit like "Happiness" or "Little Children" where we're forced to accept that Jane Adams is so un-beautiful that she'd most attract perverts and pedophiles.

Lars is neither of those things, but nobody's going to leave capable of figuring out what he is. Is he just a Walter Mitty-esque dreamer with mommy issues? Are the mommy issues far worse than a little daydreaming and could Lars really use several decades of therapy with Patricia Clarkson's versatile Dagmar? Does Lars have Asbergers or some other form of low-level autism? Probably we're not supposed to think it matters.

There's some weird subtext in the movie that argues that people in OntarWisconsMinnesDakota (whereever it takes place) are so very bored that they'd gladly get together and take part in this sort of communal delusion, because it beats shoveling or it's a nice break from bowling. And then there's the next step that argues that women in OntarWisconsMinnesDakota are so starved for man-love (presumably a kind of man-love that doesn't come home drunk and abusive) that they (or Garner's adorable Margo) can look at Lars and go "Well, other than the INSANITY [and fashion sense and anxiety and moustache], that guy's a catch]." That's a big suspension of disbelief, but I kind of made it.

Similarly, some people have complained about my first point in the last paragraph, that the whole movie hinges on a couple meetings and well-timed e-mails that miraculous caused everybody in two towns to play along with Lars' delusion. I mean *nobody* says a hostile or mocking word to him. I'm OK with that, because it all fits into a Capra-esque framework, like the way that Gary Cooper's Mr. Deeds was, as one old woman put it, just a bit pixilated, but everybody was OK with it because if you live in a small town, everybody has secrets and weirdness and you put up with it because it's home. At the end of the day, I found this giant hoax far more believable than, say, David Fincher's "The Game," in which several thousand residents of at least two countries got together to throw an obnoxious rich guy a surprise birthday party.

I wonder if maybe Gosling -- as good as he is and as acclaimed as the performance has been and as much as nobody would be seeing the movie now with said acclaim -- was the wrong actor for this kind of story. The story may be Capra-esque, but Gosling is giving a Method-style performance and his commitment to realism is a weird match. I guess "Harvey" a movie I might want to compare with "Lars," but Jimmy Stewart's performance in "Harvey" (and in the Capra movies) isn't the sort of performance Stewart was giving later in his career. He's an Everyman, who sees a giant bunny. Gosling isn't an Everyman. His presence may make "Lars" a more respectable movie, but it just may not be what the genre demands. Regardless, he's good.

Also contributing greatly are Emily Mortimer and Paul Schneider. Mortimer's one of my very favorite actresses working now and several websites, when her unspecified casting was initially announced, speculated that she might have been playing the doll. That idea intrigues me. I'm also intrigued by what a fine supporting actor Schneider has been this fall (see also "The Assassination of Jesse James...") and by just how many millions of viewers will love the links between Schneider's work in "Lars and the Real Girl" and his work in David Gordon Green's "All the Real Girls." MILLIONS.