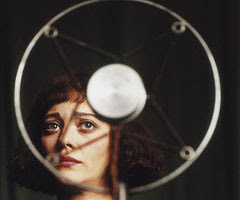 I had a pile of Netflix capsule reviews I jotted from last week's efforts to plow through 2007 releases.

Follow through after the bump for my brief takes on "La Vie En Rose," "Fay Grim" and "The Namesake."

And stay tuned tomorrow for my review of "The Golden Compass." I just recommende it to a friend "if you've ever wanted to watch a Bum Fight video featuring the Coca-Cola Christmas Polar Bears."

"La Vie En Rose"
Director: Olivier Dahan
Fien Print Rating (Out of 100): 48
In a Nutshell: You'll have a hard time finding any 2007 performance -- male or female, starring or supporting -- more showy than Marion Cotillard's turn as Edith Piaf in "La Vie En Rose." Some people watched Cotillard's embodiment of the beloved Parisian chanteuse and felt elated and astounded. Me, I watched her twitchy, lip-synching impersonation and felt utterly exhausted. The layer of affectations -- all masterfully presented, I'll grant you -- ranges from a high nasal voice to a variety of slouched and uncomfortable postures and the only thing that properly conveyed to me the essence of Piaf's star power and her indomitable (allegedly) persona and personality was her singing. Of course, the singing in the movie was all recordings of the actual Piaf. The question of why this lip-synching star turn was less endearing to me than, say, Jamie Foxx's equally gifted and superficial Oscar-winning turn as Ray Charles probably has something to do with the inexcusable way "La Vie En Rose" is edited. If you're going to randomly throw your narrative in a blender, it can't *actually* be random. The earlier and later phases of the character's life have to resonate in ways so that one informs the other, so that dramatic irony is established to producer greater poignancy. With "La Vie En Rose," there's no rhyme or reason to why Dahan goes from one scene to the next and that prevents Cotillard's performance from developing an organic evolution. If you're able to follow the things that turned her from Act I drunken urchin to Act III hunchbacked dying drunken urchin, then the performance can chart that transition, making it seem human. Making a jumble accomplishes nothing except making me suspect that Edith Piaf's life would have been a lot easier if she's just been willing to wash her face. Oh and was Dahan just choosing the most obnoxious moments in Piaf's career or was she a singularly unpleasant woman to hang out with? "Fay Grim"
Director: Hal Hartley
Fien Print Rating (Out of 100): 47
In a Nutshell: I love the idea of what Hartley sets out to do in "Fay Grim." Taking the characters from an earlier film -- "Henry Fool," which I neither loved nor hated, though plenty of people fall in one camp or the other -- and pulling them into a totally foreign genre and forcing them to operate within the conventions of that genre is a little bit awesome. In a perfect world, I guess it might be like Robert Altman and Leigh Brackett moving Philip Marlowe from a hard-boiled universe into an absurdist comedy for "The Long Goodbye." Hartley isn't operating on that level, though he's totally committed to this game he's playing. I haven't seen a mood so totally created with canted angles since a little film called "Battlefield Earth" (though, to Hartley's credit, he appears to have been doing it intentionally, while the director and DP on "Battlefield" just didn't know how to work a tripod) and I can't remember a plot that became so nonsensical so quickly. Was it the Russians, the Afghans, the Israelis, the French or the Americans behind the whole thing? I stopped caring after maybe 30 minutes, when it became clear that this was just a little parlor trick for Hartley. That being said, Parker Posey is quite comfortable in the milieu and "Henry Fool" veterans like Chuck Montgomery and James Urbaniak add quirky pleasures. Casting Jeff Goldblum and Leo Fitzpatrick as FBI agents adds a nice touch and any movie that features a woman named Olga declare, "I'm not a spy. I'm a stewardess. Really. Sometimes a topless dancer, but really a stewardess. I was trained." doesn't lack for oddball virtues. 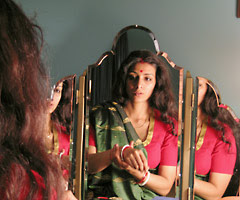 "The Namesake"
Director: Mira Nair
Fien Print Rating (Out of 100): 60
In a Nutshell: There are plenty of reasons to respect "The Namesake," with particular praise due to the performances by Irfan Khan and Tabu, plus Frederick Elmes' cinematography (which handles the different urban nuances between the United States and India). It's telling, though, that the film's main domestic trailer did a better job of unfolding the plot than the final film. Sooni Taraporevala's adaptation of Jhumpa Lahiri's novel is chock-full of the sort of nuances and character development that work better on the pages of a book and seem abrupt and jumpy on the big screen. The passage of time in the movie is particularly cumbersome, forcing Khan to play both much older and younger than he actually is and forcing Kal Penn to be the least believable 18-year-old since the early days of "Beverly Hills, 90210." Because Taraporevala and director Mira Nair are obviously trying to work favorite scenes and moments from the book into the movie by any means necessary, I often lost track of whose story the movie was supposed to be and certain things that were clearly meant to be powerful to me fell flat because of the emotional distancing. The actual stuff about the central character's name really ought to be sculpted as the center of the story, but it's an anti-climax (if not a confusion for folks who haven't read Gogol). Plus, outside of the main three characters (Penn is far better when his character approaches his real age), there are a lot of blurry supporting turns. Credit Jacinda Barrett for trying to avoid making her Token White Girl character into a total stereotype, but theatrical commercial considerations seem to have required she get more screentime than the characterization could contain. And if anybody has a clue what Brooke Smith is doing in this movie, I'd love for them to let me know. I'd have to put Nair in an upper echelon of wildly frustrating filmmakers. As much as I loved "Monsoon Wedding" and parts of "Salaam Bombay!," she's also found a way to sneak in "Vanity Fair," "The Perez Family" and the overrated "Mississippi Masala."