MovieWatch: "The Diving Bell and the Butterfly" 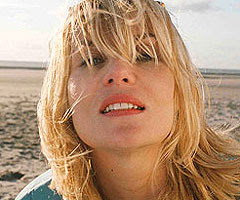 "The Diving Bell and the Butterfly"
Director: Julian Schnabel
Fien Print Rating (Out of 100): 58
In a Nutshell: [Sigh. Another of those reviews I just couldn't make myself write. And, as always, I blame my Zap2it responsibilities, Facebook and Twitter. But here goes...]

As a story, the tale of paralyzed Elle editor Jean-Dominique Bauby, who suffered a paralyzing stroke but still wrote a book about his experiences with "locked-in syndrome" by blinking one one eye, is about as remarkable as they come.

Julian Schnabel's film about Bauby (Mattieu Amalric) is an intellectual exercise, just about as experimental a film as the mainstream media and award-givers have embraced in the past 30 years.

More after the bump on why I'll gladly salute cinematographer Janusz Kaminski, as well as Amalric to some degree, but why I can't get behind the movie...

Unfortunately, the only mind I was transported into was Schnabel's. I was conscious of every contrived aspect of formal calculation.

For around 15 minutes, I was filled with admiration. I loved the way Schnabel and Kaminski created the perspective of a man whose entire universe seems to be limited to the orbit of his eyeball. Schnabel and Kaminski make every blink feel like the slamming of a door and every tear runs the risk of obliterating everything. To eyes unaccustomed to the flooding sun, every woman is like an auraed angel.

You don't really get many first-person POV movies. The list includes curios like "Lady in the Lake" and the interesting first third of "Dark Passage" and as hard as the entirely subjective camera is to pull off in a mystery, where at least the viewer is conspiring with a character out to solve a murder, it's even more difficult here. Since we're party to Bauby's internal monologue, which is at least somewhat screenwriter Ronald Harwood's invention, the restriction isn't total and the POV isn't pure, so it only feels like a minor sell-out when Schnabel begins to cheat the conceit.

It's one thing, I think, for Schnabel to break strict POV for Bauby's fantasies and his memories, but the camera steps outside the confined body on a number of occasions within the hospital. That, to me at least, felt like a cheat. Christ, once Schnabel was forcing viewers to sit through every flippin' blink of Bauby's florid ocular dictation, he might as well have just stuck to his guns. I mean, obviously people are just crazy-impressed by Amalric's compelling and convincing and emphatic eye-rolling as the paralyzed Bauby, but I wonder how much of that is a cheap stunt. And I'm not saying it's a stunt by Amalric, who looks like he was probably having a mighty unpleasant time. But it's a stunt for Schnabel. The more you show of the invalid Bauby, the more full-of-life the memories and fantasies of the fully able Bauby seem to be. Despite the fact that we're lead to believe that Bauby was this fun-loving bon vivant, nothing in the fantasies or flashbacks really reinforce that idea, so it's all about the contrast. When Amalric gets to behave normally -- and I remain perpetually distracted by his resemblance to Roman Polanski -- it's heightened by extension of those omniscient POV cutaways, those cheating moments.

Because Schnabel's approach to the material was the true star of the movie, I can't say that I ever felt anything for or about Bauby. So I say wondering how much that was intentional. I wondered if the viewer is supposed to care for and about Bauby only through the dew-eyed affection of every nurse, therapist and former lover who enters the room. Everybody keeps discussing Bauby as heroic, as being soulful, as miraculous. And, as I started this review, I have no doubt that he was. So again, Schnabel gets to take a shortcut and show us unwavering affected imagery coupled with the sort of flowery prose that's best written, I guess, by hormonal teenagers and paralyzed Frenchmen. Everybody on-screen swoons, so viewers do as well.

So I got annoyed by that. I got annoyed by the POV. And I got distracted by the fact that I was never exactly sure how many women there were in the movie in the first place. The one I was best able to keep track of was Emmanuelle Seigner and that was largely because I kept debating if she'd been cast entirely because she's married in real life to Amalric's "Chinatown"-directing doppelganger. And while I know it's racist to say that all French Brunettes look alike to me, but reading the IMDB credits has already caused me to realize that the woman I thought Bauby was in Lourdes with wasn't, in fact, the woman he was really in Lourdes with, which must mean either that I wasn't paying close enough attention or that my that time I was going off into my own locked-in world.

There you go. I know lots of people love this movie. I know lots of people are moved (as opposed to bored) to tears by it. And all I can say is that I felt like I was watching an art gallery film installation that was meant to be seen in five minute snippets before moving on. Perhaps after checking out other parts of the gallery, you could return, discover that the main character was still blinking out an over-written sentence (he really ought to have gone more Hemmingway-esque) and leave again. Sitting for 112 minutes at a stretch was too much, but maybe if I'd gone and watched 45 minutes of "Juno" in the middle, I might have had more tolerance for the bookending.

I put "The Diving Bell and the Butterfly" in a similar category to "I'm Not There." They're both movies that are so superficially intellectualized that critics are falling over themselves to think the intellectualization is worth the effort. I guess I'm a boor.

[P.S. Max Von Sydow is a lion. Whenever he was on screen I was instantly more involved and more moved than when he was gone. I'd rather have watched a movie about a 90-something man in failing health who have to cope with the idea that his son has become even more infirm than he is.]