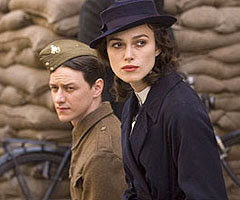 "Atonement"
Director: Joe Wright
Fien Print Rating: 82
In a Nutshell: [Before getting into this already delayed review... I've been so hard on "How I Met Your Mother" this season that I've gotta give it up for tonight's episode, which probably the season's peak and not just because it gave extra screentime to Wendy the Waitress (who could now become the Gunther of McLarens). So what are the chances that Stella the Tattoo Remover is The Mother? I suspect the kids would have caught on.]

There may be better movies in 2007 (though I can only think of two or three thus far), but no other 2007 release is likely to match "Atonement" in terms of prestige spit-and-polish. Based on the acclaimed novel by Ian McEwan, "Atonement" is made with a technical meticulousness and an old-fashioned flair that you don't see very often. Throughout the film, I kept thinking of the literary craftsmanship that Anthony Minghella brought to films from "The English Patient" to "Cold Mountain" to "The Talented Mr. Ripley" (one of the underappreciated masterpieces of the past decade), the respect for the idea that filmmaking with the glint of awards in your eyes isn't always a recipe for disaster. That's why, in one of the final scenes, I was able to identify Minghella as he did a cameo as a TV interviewer. I guess I know what he looks like anyway, but even if I wasn't sure, it just seemed right.

The interesting question might be if Joe Wright has already moved ahead of Minghella in the ranks of prestige filmmakers, if the disappointment of "Breaking & Entering" (a movie that lurks somewhere low in my Netflix queue) should put Wright at the top of the list to tackle any Booker Prize winning novel or novel by a Booker Prize winner. I've only seen two things directed by Wright, but I know the guy has mad chops.

His adaptation of "Pride & Prejudice" was smart and funny, but also elegant and romantic. Working on a larger scale with "Atonement," he shows a pure filmmaker's eye and ear. If there are flaws to "Atonement" -- and there are -- they come from a structure or flow that I have to assume came from McEwan's novel, a rhythm that satisfies a reader dedicating many hours to a work in a way somewhat different from the demands of an audience entranced for two hours.

More discussion [somewhat abbreviated by my standards, since I just wanna post this and be done with it] after the bump...

[There are probably spoilers here... Not if you've read the book, I wager. And not MASSIVE spoilers regardless.]

I was hooked on the craftsmanship of "Atonement" almost instantly. The movie opens with the titles typed out on the screen, as from an old Corona typewriter. The typewriter is wielded by Saorise Ronan's Briony as she works on her latest literary effort and within seconds, Dario Marianelli's score picks up the percussion of the typing and integrates it. Then, as Briony goes running off with her play in hand, Wright and cinematographer Seamus McGarvey match the camera movement to the rhythm of the music and Paul Tothill's edit captures the syncopation perfectly. There is a precision to every gesture and technical aspect of "Atonement" and it's been put to use in a rather haunting story about the dangers and potential salvation of storytelling.

Storytelling and perspective are essential to "Atonement" and Christopher Hampton's adaptation unspools through a number of frames. There are flashbacks, fantasies and events shown from obstructed or partial points-of-view only to be retold again. The problem in the storytelling comes through the three ages of Briony. Ronan, Romola Garai and Vanessa Redgrave do more than just share the same haircut and birthmark. Their matching mannerisms create a through-line for the story. But there's no avoiding the fact that the first part of the story is the most entertaining, the second part the most powerful and then the third part exists just to tie together what came before. It doesn't do it badly by any means, but the momentum can't help but wane.

All three of the actresses playing Briony are splendid, but it's hard to think of any performance that falls flat. James McAvoy finally steps up as a movie star, giving a likeable and assertive turn. If he'd been as strong and memorable in "The Last King of Scotland," Forest Whitaker might have had to win his Oscar for supporting actor, instead of dominating the screen. He's matched by Keira Knightley, whose excellence isn't in the moments of brassy confidence, which we've seen her play well in the past, but in the glimpses of weakness and surrender. I don't know if any of the film's stars are showy enough to get the attention of Oscar voters, but that shouldn't detract from their actual quality.

I'm guessing "Atonement" will get plenty of Oscar attention across the technical board.

My second favorite movie of last year was Alfonso Cuaron's "Children of Men," one of those rare movies where everybody walked out talking about two or three amazing tracking shocks, head-scratching cinematic oddities that left everybody in awe of the director's vision and the cinematographer's craft. "Atonement" has a couple doozies as well, but the one that'll attract the buzz is a shot that surveys the wreckage of the British army on the beach at Dunkirk. The Dunkirk Beach Shot from "Atonement" probably doesn't have quite the same level of difficulty as the series of impossible tracking shots in the "Children of Men" Refugee Camp. Rather than breathlessly unfolding a full action scene in one take, the "Atonement" shot breathlessly unfolds the full scope of a dark hour in military history. You need know nothing at all about the Dunkirk evacuation to feel the hopelessness. It's beautiful.

McGarvey has to be considered at the forefront of this year's Oscar cinematography race along with Roger Deakins and, from what I hear, Janusz Kaminski. Throw in inevitable Oscar nods for costume, production design and hopefully for Marianelli's music and "Atonement" should play well through February.

OK. Seriously. Cutting this short. Good movie. Go see it. They don't make many like this anymore and when they make 'em like this, they're usually embalmed curios -- stuffy, fussy and dull. "Atonement" is none of those things.