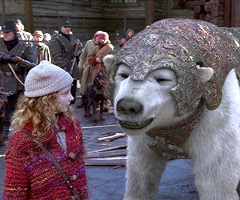 I bought Philip Pullman's "Northern Lights" when I was in England four or five years ago and grew perplexed that a series of books I'd never heard of before was a U.K. publishing phenomenon on nearly the same level of Harry Potter. I ready it quickly, periodically scratching my head in confusion, and plowed through the next two books in the Dark Materials trilogy with dutiful persistence. I didn't enjoy them, but I wanted to see where they ended up. It's not that I didn't somewhat respect the books, but the labored alternate dimension fantasy just wasn't my cup o' fish-n-chips, as the British don't say.

So I went into Chris Weitz's seemingly ambitious film with a fair amount of caution and trepidation, fully aware that the things that annoyed me about the books were likely to still annoy me in the movie.

The long-and-short is that Weitz has realized Pullman's aesthetic vision with occasionally remarkable assurance. Things that I never would have expected to work stand out with clarity and sometimes even beauty. That being said, Weitz has stripped Pullman's book of theme and subtext and delivered a movie that's all plot. It plows ahead for nearly two hours with a single-mindedness that's sometimes confusing and sometimes exhausting.

I guess I'll be generous and talk about the things that worked first.

The idea of the daemons -- anthropomorphized tag-along consciences/inner children/what-have-you that accompany humans in Pullman's universe -- is one that I'd have expected to play better on the page than the screen. The result onscreen could have been a mixture of live action humans and animalistic CGI clutter. Instead, by keeping group scenes to a minimum, Weitz lets the daemons we see do an acceptable job of representing their human counterparts. The real "characters" among the daemons are Ms. Coulter's (Nicole Kidman) golden monkey and Lyra's (Dakota Blue Richards) shape-shifting Pan, which are both well rendered in their expressive computer-generated way. I take some exception to the voice work for the daemons, particularly Freddie Highmore as Pantalaimon. Highmore's boyish tones aren't nearly well enough distinguished from Richards' voice and the result is an occasional conversational clutter wherein I wasn't sure if we were listening to girl or daemon. I accept the idea that since daemons are a kind of inner monologue, it would make sense for the voices to be fungible, but at that point, I'd have preferred if Richards had voiced her own daemon. Still, though, that worked well.

Working best of all, though, were the armored ice bears of the North. They're very close siblings to the playful Coke drinking polar bears of advertising fame (the friend I saw the movie with reminded me that Rhythm & Hues, one of like 50 effects houses to work on the movie, was also responsible for the Coke bears, so that makes sense), only bigger and more vicious. The fine pixel-work is aided immensely by the fact that the only two bears with speaking parts are voiced by Ian McKellen and Ian McShane, who are every bit as woundedly noble and insecurely villainous as can be. We can debate all day whether or not it's a bad sign that despite all of the top-rate human acting talent on display, the film's most emotionally satisfying scene is the brawl between the Ian-Bears.

Newcomer Richards makes an appealing and capable lead, ever reminding viewers that her Lyra is part elitist snob and part blue collar striver. Her voice and expressiveness are unexpectedly mature, but in a "The weight of the world has suddenly be thrust upon me" way, not in that "I'm actually a robot or alien bent on global domination" way that we've come to expect from another moppet named Dakota. Richards and her fellow young co-star (Ben Walker, I think) are so notably British that more than a few viewers will be hoping that the secret experiments being performed on the plot's missing children might include dental work.

Richards' Lyra is assisted by a slew of fine actors including "Casino Royale" stars Daniel Craig and Eva Green, who provide the requisite gruff masculinity and mysterious femininity. I'm also partial to any film willing to cast Sam Elliott as a heroic lead.

Face rendered unmovable either by an actorly choice or cosmetic work, Kidman is everything one could hope for in a Coulter, the glint of her eyes determining whether or not she's trying to be a maternal or wicked. Also representing the forces of evil to varying degrees are folks like Christopher Lee and Simon McBurney, adversaries who most newly arrived viewers will never, in a million years, associate with the Catholic church.

As you've probably heard, "The Golden Compass" has run afoul of the Catholic League, who have decided that since the book it was based on had a powerful distrust of the Church hierarchy, the movie must also be blasphemous. This is just one of those examples where actually seeing the movie might have saved a lot of trouble, because it'll take a mighty perceptive child to walk out saying, "Mommy. Daddy. Why was this movie so at odds with the religious hegemony of the Catholic Church. Parents, I've begun to doubt the existence of God entirely!!!"

Not gonna happen. Weitz's film races through the key events in Pullman's novel, but lacks the necessary time for the complex buttressing of the novel. "The Golden Compass" is being compared to the "Lord of the Rings" and "Narnia" movies (it's better than the latter, inferior to the former), but those movies have had running times of at least a half-hour longer than the 113 minutes for "Compass." Here is one of those rare times when you're going to catch me saying that a movie ought to have been longer, but "His Dark Materials" without the Free Will/Anti-Church underpinnings is like "Narnia" without the Jesus Lion.

Of course, it's not like Weitz did such a good with the exposition he was forced to deliver. The movie begins with a lengthy voiceover that explains the rules of the alternate dimension and ends with an belabored set-up for a sequel. Any time, really, that the characters started laying the foundation for Pullman's books, my eyes started to glaze because it never sounded like the characters understood either. There's finally very little of that and very little by way of character or the overall franchise journey. For British kids raised on the books, that'll make the movie disappointingly incomplete. For American children plunked in cold, I'd bet things are hard to penetrate.

Then again, early tracking suggests that "The Golden Compass" probably won't reach $30 million for its opening weekend, a take that probably cripple's New Lion's hopes for a sequel.

[One last thing to mention: The closing credits song by Kate Bush manages to supplant Annie Lennox's post-"Valley of Elah" dirge for the title of the year's worst. Titled "Lyra," it's one of those over-literal songs that explains what happened in the movie and I swear it includes the lyric "Lyra/ With her soul beside-a." DREADFUL.]

Anyway, stay tuned for my take on "Atonement," though maybe not til tomorrow.