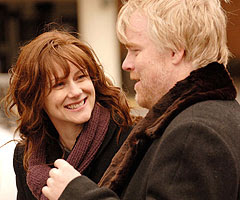 "The Savages"
Director: Tamara Jenkins
Fien Print Rating (Out of 100): 68
In a Nutshell: [I don't wanna dedicate a full blog post to last night's "Friday Night Lights," but it was an episode with some pretty great parts and some clunkiness.

First off, thanks to the NBC promo department for spoiling Landry going into the police department to confess to murder. Were there not enough other plotlines you could have teased? Landry going hunting? Matt gettin' it on with Carlotta? Tammy blowing up at John from Cincy? Smash discovering that the world of college recruitment is EXACTLY like "He Got Game"?

Speaking of Smash... Last year the dude went on steroids because of a low rating from a key scout. This year, he's had one good game and what appear to have been several games where he wasn't a factor at all. High school running backs with that profile not only don't get recruited actively, but they REALLY don't get the full-on Jesus Shuttlesworth treatment. At this point, he's an undersized running back known to vanish in games without his main fullback. That's not a blue chipper.

But the Riggins subplot with the ferret wrangler was tolerable because it set up the episode's best scene, as Riggins refused to leave the field and Coach Taylor finally, as we knew he would, relented. Other great scenes include Julie's rage at her mother humiliating her and the touching last scene with Coach and Mrs. Coach.

Oh and in answer to the question asked by the NBC promo department in the "Scenes from next week"... What Landry did originally, in the pilot sent to critics, was self-defense. What he actually did in the version that aired was murder, cold-blooded and simple. I look forward to seeing the show weasel out of legal logic. Sorry... Enough of this.]

My actual review of "The Savages" will be after the bump. I promise...

So over at Jeff Wells' Hollywood Elsewhere bloggy-thing, Wells expressed shock and confusion the Hollywood Foreign Press Association's decision to put "Charlie Wilson's War," "The Savages," "Margot at the Wedding," "Juno," "The Darjeeling Limited," "Waitress" and "Lars and the Real Girl" in the musical/comedy category for the Golden Globes.

The first problem, of course, is the HFPA for their on-going conviction that a drama is a movie without an iota of comedy.

But yes, "Juno," "Waitress," "The Darjeeling Limited" and "Charlie Wilson's War" are absolutely closer to comedies than dramas. It's in the way they're written, edited and performed. They're comedies with dramatic elements. I haven't seen "Lars" and "Margot" is just plain tough to categorize. Noah Baumbach told me, though, that all of his movies star off as comedies when he's writing them. So I'll trust him,

But "The Savages"? Well, somebody at Fox Searchlight did a brilliant job of cutting a trailer that makes the movie look like a pitch-black family comedy in the Wes Anderson/Baumbach vein, but guess what? "The Savages" is unquestionably a drama with comedic elements, rather than the other way around. Pitching that movie as a comedy is almost certainly a way to generate audiences, particularly younger audiences who may not have the most direct personal connection to the subject matter.

"The Savages" was written and directed by Tamara Jenkins, who hasn't made a film since 1998's more straight-forwardly amusing "Slums of Beverly Hills" (a movie that other people, it should be noted, liked more than I did). It's about as simple a story as one could imagine -- siblings Jon (Philip Seymour Hoffman) and Wendy (Laura Linney) have to care for their estranged father (Philip Bosco), now suffering with dementia. On the level of naming, Jenkins isn't working in particularly subtle territory here, if the siblings stuck in arrested development are named Wendy and Jon (I guess naming Hoffman's professor "Peter" would have been *too* obvious) and the family, characterized by their often harsh and brutal exchanges, masked by exterior intellectual trappings, are the Savages.

Jenkins also uses geographic location to determine tone with a fair degree of predictability. The film opens with a broadly comedic title sequence in Sun City, Arizona and that city's active seniors provide Jenkins with the chance for a few cheap laughs that vanish once the action shifts to Buffalo. Predictably (and realistically), Buffalo is presented as the darkest, grayest, gloomiest place on Earth, a contrast to the sunny Hell-on-Earth of Arizona.

Beyond those steering elements, though, Jenkins dodges what would typically be the expectations of this sort of film. Your basic estranged family reunion flick is about a 95-minute build to catharsis. Repression and anger are overcome, secrets are revealed, hugs are exchanged and even the prospect of death is finally an additional liberation. Jenkins has no interest in that sortta thing. She uses the humor -- and it's frequent if not pervasive -- to spike an overall tone that's meant to be less gloomy and more "real life," or something like it. This isn't the sort of movie where senile old folks say unexpectedly offensive and funny things that are meant to make audiences laugh while also recognizing essential moral truths. This is the sort of movie where the old man with dementia is generally confused and difficult to manage.

One of the things that irked me about "Little Miss Sunshine" was that Steve Carell's character was a Proust scholar, but with the exception of a cumbersome and contrived monologue, the Proust aspect has almost nothing to do with the character. With "The Savages," Hoffman's character writes and teaches about Brecht, so it's almost impossible not to try to view the movie through some Theater of Unrest framework. But although "The Savage" isn't at all a conventionally structured movie, it isn't confrontationally unconventional.

Just as the events in "The Savages" only have a minor cumulative impact on the main on-screen characters, I've spent a lot of time musing on whether or not the movie actually had all that much of a cumulative effect on me as a viewer. Certainly it had less than I might have liked.

But that doesn't mean that you aren't supposed to go to see "The Savages," if only for Linney, Hoffman and Bosco.

Hoffman and Linney are veterans of this sort of cinema of discomfort, but just because their characters are consistently self-destructive doesn't mean they're similarly self-destructive. I'm not sure how I'd quantify the exact differences between this Linney character and her earlier wallflowers or this Hoffman character and his previous schlubs, but every line-reading or passing glance from these two pros is satisfying. Of course, it's an unavoidable problem that if you cast Linney in a film about estranged siblings, you draw comparisons to Kenneth Lonergan's "You Can Count on Me," which isn't a race "The Savages" can win.

Although "The Savages" isn't really a comedy, you come out of the movie discussing the funnier moments, talking about Hoffman's elaborate neck sling, uncomfortable sex scenes or an awkward screening of "The Jazz Singer." The dramatic moments dominate, but are intentionally less memorable.

Now it's time to watch USC-UCLA. Fight on.
Zap2it.