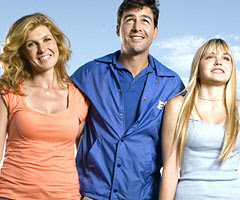 It's looking fairly likely that in some form or another NBC will bring "Friday Night Lights" back next season, so I'm not going to get all sobby about how Wednesday (April 11) night's season finale could possibly be the show's series finale. I'm just going to knock on wood and refuse to accept that NBC will let a show this good get away.

I've seen the finale and I'm gonna attempt some sort of posting hocus pocus so that people don't have to see spoilers without clicking through. But I do wanna talk a little bit about the episode, why it disappointed me and why I still loved it anyway.

The "Friday Night Lights" finale was, most simply, a darned fine piece of network television which had the misfortune of falling so soon after the "Mud Bowl" episode (2007's finest hour of network TV to date) and after the "Best Laid Plans" episode, which ought to serve as the Emmy nomination tape for stars Kyle Chandler and Connie Britton.

Titled "State," the finale is a rushed affair. You'd say that NBC owed the series a two-hour finale, but what with the show's ratings, NBC doesn't actually owe it anything. Regardless, the show's creative team deserved a two-hour finale and they're left with the unenviable task of tying up a season's worth of plotlines, of forcing a satisfying resolution upon the whole thing just in case the unthinkable happens.

The facet of the episode that suffers worst, alas, is the climactic football game, the Texas State Championship. As we critics have told you over and over again, this show has never really been about football and since the Peter Berg-directed premiere, the episodes have shied away from extensive pigskin action. As a result, it's seemed as if every single game this season has hinged on the Panthers coming from behind thanks to a perfectly orchestrated trick play. To some degree that's reflected how tenuous this team's success has been, but it's gotten cheesy at times. The Championship game represents the worst of that. Worse than the coming from behind and the trick play, though, is the fact that the game has to be taken care of so swiftly that it has no dramatic momentum whatsoever. The Panthers are behind routed at halftime and in the second half they rout the other team. There's no sense that anything has changed, no sense of how our established heroes have changed and, because we never met a single active defensive player for the Panthers, no awareness that the defense toughened up in the second half. It's momentum-less.

The result of the game is flat-out wrong. The team lost in the book, they lost in the movie and darnit they had to lose on the TV show. That's just the way it's supposed to work. The season was about the journey this team took over the course of the fall, the adversity they had to overcome, the tragedies and trials that touched every single one of them. What they would have gained in losing, in bring the team together and bringing the town together, was far more important than anything they gained in winning, particularly since I don't understand how they won. Was Coach Taylor's halftime speech *that* good? Nah. The ending of Buzz Bissinger's book wasn't dramatic enough, so Peter Berg created a more dramatic ending for the movie. I'd have been perfectly happy seeing Berg's ending recycled or letting the writers find a different creative way to end things, but they didn't. Actually, I'd bet they had an ending with Dillon losing, but things got rewritten either because of doubt on their part or the network's part, but I'd love to see that ending. Even the recent dud of a "Bad News Bears" remake knew not to have the Bears win the big game, knew that that wasn't what the movie was supposed to be about.

The finale had a few too many of the conventional elements that have plagued lesser episodes this season. I, for example, didn't need Jason Street to suddenly become Vince Lombardi and that's not a plotline I want to see carried through next year. And while I love the friendship between Landry (frequent series MVP Jessie Plemons) and Tyra (Adrianne Palicki, improving with every episode), I don't buy a romance between them for a second and that's not a plotline I'd want to see carried through next year.

The finale was at its best when it continued the maturation of several characters who looked like pure cliches in the pilot. How much have Giaus Charles' Smash and Brad Leland's Buddy Garrity grown over the season? Well, they seem like people now, darned near as real as Matt-and-Julie and Coach-and-Coach's Wife, the two best couplings on TV, bar none. And how remarkable is the chemistry between Chandler and Britton? They played the pregnancy subplot beautifully, but I kept thinking how awful that stunt could have seemed in lesser hands. With these two? I got misty eyed when Coach smiled that "Get out of here!" smile to Mrs. Coach.

So much singing has been done about "FNL" this season that it's almost impossible to find unsung heroes, but let me mention a few: Kevin Rankin, who will always be the bumbling RA from "Undeclared" to me, was an anchor for the season-long arc involving Street's partial recovery and he kept me from excessively grousing at just how fast Street became a world class Murderball player. Then there's Alexandra Holden, who has totally shed the stigma of being a dull "Friends" love interest (Ross's inappropriate teacher-student romance) to become just about the sweetest, coolest tattoo artist in the word on "FNL." I've even liked Brooke Langton as Riggin's MILF neighbor, though I'm not likely to forgive her for romancing the head scab in "The Replacements." Nearly everybody who has entered the "FNL" universe has served a purpose and been an asset. That's amazing.

If NBC chooses to cancel "Friday Night Lights," I'm not going to be one of those people who blames the network. Fans probably shouldn't expect much interest from the network for petitions or mini-footballs or whatever "Save This Show" campaigns get lost. Guess what? NBC knows that the people who watch "Friday Night Lights" really like it. The network is aware that critics have been beating their drums from September through April without stopping. The network is also aware that ratings have showed no sign of going up, not even an iota. NBC has moved "FNL" around its schedule trying to find the right time slot. It's promoted the heck out of the show with a variety of different campaigns. And guess what? Still nothing. The people to blame for the failure of "FNL" are TV viewers, the sheep who never even sampled the show and will probably be complaining next fall about how there's nothing on TV that the whole family can watch together.

Let's hope it doesn't come to that.