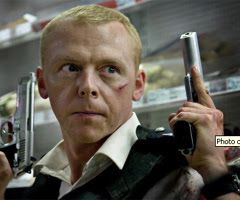 "Hot Fuzz"
Director: Edgar Wright
Fien Print Rating (Out of 100): 75
In a Nutshell: The reason why so many of today's cinematic parodies -- your "Scary Movies" and "Date Movies" and "Epic Movies" -- suck isn't actually so surprising: The people making them are inept filmmakers with absolutely no cinematic gifts or affection for the genres they're parodying. That's pretty simple, eh? They have only vapid irony and idiotic contempt for films that must have struck a chord with viewers in the first place, or else they wouldn't have been worth mocking. The reason why "Shaun of the Dead" and the upcoming "Hot Fuzz" are so very good is that the man who directed them, Edgar Wright, is a truly talented artist and so while "Shaun" and "Fuzz" could be easily pigeon-holed as zombie and Michael Bay parodies, they'tr movies that are capable of standing on their own merits not just as comedies, but as frightening gore flicks and glossy action flicks respectively. The only thing that would keep me from making some grand statement about Edgar Wright's gifts is that both of his features *are* feats of mimicry, but I don't doubt for a second that when he gets around to doing more stand-alone films, he'll be able to deliver. It isn't *just* mimicry. It's emulation as well and "Hot Fuzz" shows growth from "Shaun," so it's all encouraging.

You don't have to have seen "Wicker Man," "Point Break," "Bad Boys 2," "Die Hard," "The Omen" or any of the other literally dozens of movies that get nods in "Hot Fuzz." There's physical comedy (co-star Nick Frost does fat-guy stumbles with the best of them), fun with language (Wright and star/co-writer Simon Pegg have enough throw-away and background jokes for a dozen viewings), a running gag with a goose, grand guignol gore and general foul fun (heh -- and *fowl* fun) aplenty. There are cameos by a daunting assortment of familiar British faces including larger parts for Oscar winner Jim Broadbent and My Favorite Bond Timothy Dalton, both having a ball. But even if you're not being amused (which means your sense of humor is at fault), Wright has taken the Michael Bay playbook and stolen all the best quick-cuts and jarring angles. Edited with precision and wit by Chris Dickens and scored by action veteran David Arnold, "Hot Fuzz" actually has some thrilling action scenes that work on their own and *then* make you laugh.

By my figuring "Hot Fuzz" is at least 10 minutes too long, possibly 15, with the biggest lag coming at around the half-way point. But at 121 minutes, it's still shorter than most of the bloated epics it's lampooning and it's climax is absurdly great. To say that this is the movie "Reno 911! Miami" wanted to be is damning "Hot Fuzz" with less than faint praise. It's the funniest movie I've seen in a long, long time.

Wright has long been attached to the big screen version of Bryan Lee O'Malley's graphic novel franchise "Scott Pilgrim." As much as I love that comic (I'm looking forward to "Scott Pilgrim 4" more than "Harry Potter 7"), I think it's in good hands.
Tweet