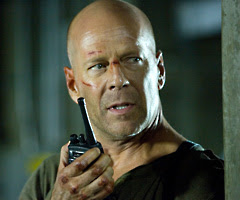 "Live Free or Die Hard"
Director: Len Wiseman
Fien Print Rating (Out of 100): 67
In a Nutshell: [Sorry, but I'm still not prepared to forgive "Live Free or Die Hard" for its absolutely horrid title. The movie has nothing to do with New Hampshire and at no point does anybody in the movie have to make the titular choice. As sequel titles go, it's still better than "2 Fast 2 Furious," but at least for the third movie, that franchise didn't go with "3 Fast 3 Furious." I'm also unhappy with the PG-13 rating for this one. If John McClane can't say "mutherf***er" (we're a family-friendly blog here), why bother having him say "Yippee Ki Yay"? And if John McClane can't say "Yippee Ki Yay," is he even John McClane? But more on that after the bump, I suppose.]

The full review is after the bump...

I know it isn't necessarily saying all that much, but "Live Free or Die Hard" comes closer to delivering on its premise than any of this summer's various sequels to date. Although it instantly takes its place as one of the 10 or 20 must ludicrous movies every made (the defiance of narrative logic, much less the laws of physics is remarkable), "Die Hard 4" had me laughing at its balls-out audacity almost from the beginning. The trailer -- a magnificent piece of promotional editing if e'er there were one -- shows several of the best parts, but it only gives a taste of the masterful set-pieces, including the tunnel chase and John McClane going one-on-one with a military aircraft on a multi-level freeway.

I went back and forth on whether or not Len Wiseman was a good choice to reboot this franchise. At times, scenes were edited to bits like they were shot by a third-rate Michael Bay knock-off, like a feature length version of that "You wouldn't steal a car..." anti-piracy commercial. But then Wiseman and DP Simon Duggan would turn in some entirely improbably shot and I'd be sucked into the action completely. I would love to have seen the set-up for one early shot in which an evil French henchman (*all* the henchmen are French, for reasons that are never explained) jumps from one rooftop to the next and sweeps down a fire escape, parkour-style, in one continuous motion.

Great care has been taken to light Bruce Willis' bald dome, making him appear more than ever like the H.R. Giger's Alien Queen. He's definitely showing his age, but that doesn't mean that he can't deliver quips when required.

McClane's most worthy adversaries are just the various fireballs and projectile automobiles that are launched at him. One of the most interesting things about this franchise has always been that McClane's interactions with the Big Bad are usually limited to a series of menacing phone calls, so being a "Die Hard" villain is all about how well you can deliver threatening dialogue in the face of Willis' one-liners. It's not that Olyphant doesn't have it in him to play a fantastic villain -- see "Go" or "Girl Next Door." It's just that his character here is minimal and Olyphant's only responsibility is to get really close to the camera, grit his teeth and snarl. Far better is Maggie Q, who looks phenomenal, moves like a martial arts-trained cat and certainly would be a true star if Hollywood could view her as more than Token Asian Action Babe.

My biggest problem with "Die Hard 4" is that it continues the franchise's descent into better-than-average-but-generic action territory. The genius of the first movie was that the action was completely contained within the Nakatomi Tower. In the second movie McClane's universe expanded, but he was still mostly operated around an airport and the surrounding environs. The third movie expanded things to New York City. And by the fourth, we're using the entire Eastern Seaboard. Tension dwindles as the action becomes less restricted. Remember when every movie was "Die Hard on a ... [a plane, a boat, a bus]" I wish "Die Hard 4" had paid more attention to the "Die Hard" formula. Then, I guess, I would have missed seeing John McClane taking out a helicopter with a cop car. And that would have been sad.