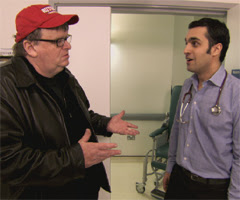 "Sicko"
Director: Michael Moore
Fien Print Rating (Out of 100): 70
In a Nutshell: [I caught a press screening of "Sicko," which means I didn't pay to see it, but at least I didn't download it through the series of tubes known as the Internet. Michael Moore has been savvy enough to laugh off the movie's piracy. He has more money than he probably needs, so he can be satisfied with to play the role of agitator, box office aside. The good folks at the Weinstein Company are doubtlessly less amused. Michael Moore doesn't need a hit, but Harvey and Bob Weinstein do.]

I have no doubt that one man (and/or woman) can make a difference. I do, however, have doubts that Michael Moore can make a difference. That's a little sad, but can you disagree? "Bowling For Columbine" won an Oscar, broke box office records and failed to create a groundswell capable of yielding any meaningful new gun control legislation. "Fahrenheit 9/11" won the Palme d'Or at the Cannes Film Festival and broke even more box office records, but when I turn on my TV, George W. Bush is still president. So although Moore's latest, "Sicko," is a call to action that I happen to endorse whole-heartedly, I imagine that it will be just another Moore documentary that reaches only people who agree with Moore. That's the danger of being such a polarizing figure -- The things that "Sicko" advocates really ought to resonate across all ideological lines, but the people who are sick of Moore (and have been for 5 or 10 or 15 years) just won't care and won't be able to separate the messenger from the message.

You'd think it would help that "Sicko" is a far, far better movie than "Fahrenheit 9/11." Whereas "Fahrenheit" aimed straight for the gut and forced discriminating viewers to ignore an inexcusable rhetorical sloppiness, "Sicko" aims for the heart and has its argument well in hand and only a true fool would disagree: Although the American health care system may have the best doctors and facilities and technology in the world, the system has been co-opted by drug companies and HMOs to the point at which too many people are incapable of receiving, much less affording, the best available service. As Moore makes his argument, there are no heroes in this fight in the United States -- even Hilary Clinton, once a universal health care champion, has now joined every other politician in Washington in the pocket of Big Pharma.

The heroes, then, are in Canada and England and France and even Cuba, countries where anybody can walk into a hospital, get treatment and walk out, content that they aren't mortgaging their future to have a finger reattached. Moore certainly finds exceptions to the typical anti-universal health care canards, which isn't the same as disproving them completely. "Sicko" is full of anecdotal evidence, but only fleetingly encumbered by statistics and all-encompassing facts.

Because this is a Moore film, you know that most sentient people will instantly be able to notice the points where the director is fudging facts or ignoring pieces of the puzzle that don't fit his needs. Conservatives, for example, like to blame many of the health care system's faults on a legal system run amuck, waves of malpractice suits that leave doctors terrified to offer treatment in some circumstances and raises insurance premiums for everybody else, a litigious culture that doesn't exist to the same degree in England or France or Canada. Moore doesn't go anywhere near that path. In fact, he doesn't even provide a voice for the argument against universal health care in this country. I'm just guessing here, but I assume that Moore notoriety is such that no HMO bigwig, lobbyist or politician would willingly sit down with him for a fresh interview. His argument would probably be that the point-of-view in "Sicko" is so common-sensical that no opposition voice is needed.

I don't disagree. And I think Moore does a fine job telling the story here, actually building to his call to action, rather than just shouting random expletives into a vacuum, which was how "Fahrenheit 9/11" often felt to me. Appearing in the film only only sporadically, Moore plays his incredulous man-of-the-people routine well, though he can't help but get in his own way here and there. The politicizing of an issue that shouldn't be political becomes a stumbling point. Would "Sicko" be better without the attacks on President Bush the Second? The health care problem predated George Junior and probably won't be magically solved in his absence, so I'd say so.

I have a hunch that the Moore-haters out there will respond to this movie with taunts of "Well, if Michael Moore loves France/Canada/England/Cuba so much, why doesn't he just move there?" which is every bit as smart and well reasoned as the seven-year-old who says "If you love broccoli so much, why don't you marry it?" Moore *is* a patriot and the movie is about the United States failing to live up to its potential and failing to live up to its contract to its citizens.I guess some people will think that makes "Sicko" anti-American. Those people are wrong.

[I'm tempted to add five points to the movie's overall score just for the French-language rendition of Barry Maguire's "Eve of Destruction" that plays over the end of the credits. But I'm fine with where I am -- "Sicko" isn't a great movie, but it's a good movie and it's a movie that I hope people see, even if it probably won't make a difference.]