Take Me to the Pilots: ABC's 'Cashmere Mafia' and BBC America's 'Jekyll' 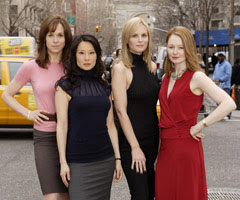 [I remind you here that these aren't reviews. Or at least my take on "Cashmere Mafia" isn't a review. There's still a chance for steps to be taken to make the show stink a lot less, or at least that's the benefit of the doubt that I'll give ABC. My take on BBC America's "Jekyll" probably could be a review, if I cared. The show has already aired twice in the U.K. and the only big differences will be minor edits for content.]

(Unrelated note: You know how some movies get better in your mind as you have time to think about them and mull them over and other movies, well, don't? You may wanna put "Live Free or Die Hard" in the second category. It's not that I didn't enjoy the experience of watching the movie, but it strikes me that my Fien Print rating [67] was much too high. Well, maybe not "much," but it doesn't clearly delineate between "good-fun" movies and "fun-fun" movies. "Live Free or Die Hard" fits in the second category. A movie that may improve in my mind is Ben Affleck's "Gone, Baby, Gone," which I saw last night, but can't even do a Nutshell review because it's four months from being released. Let's just say that the more I'm able to think of the movie on its own merits and separate it from the book in my mind, the more worthy it seems.)

Anywho, follow through after the bump for my thoughts on ABC's "Cashmere Mafia" and BBC America's "Jekyll."

Show: "Cashmere Mafia" (ABC drama)
The Pitch: You know how you can watch TBS repeats of "Sex and the City" and eventually they cease to be funny and they become flat, shrill and predictable? Now you can save the time and get the same effect from one viewing of "Cashmere Mafia."
Quick Response: Like the ladies of "Women's Murder Club," the high-flying female executives of "Cashmere Mafia" spend a lot of time discussing how men are all cads and how difficult it is to be a successful woman in the world, contentions that I wouldn't dare contest. At least when the characters of "Women's Murder Club" are done with their recycled, over-obvious, often painfully penned banter, they go out and SOLVE FREAKIN' MURDERS. When they're done gossiping like the third-rate "Sex and the City" knock-offs they are, the gals of "Cashmere Mafia" just go off to the most generic office drama imaginable to enact plotlines that couldn't be more predictable. The men in their lives are totally interchangeable, prompting me to think that a great gimmick for a show link this would be to just let all of the men be played by a single square-jawed actor -- let Jason Gedrick play the husbands of all four women to make a symbolic point of some sort. Instead, the men are interchangeable because you couldn't get recognizable actors to play such weak characters. The funny thing is that I don't blame leading ladies Miranda Otto, Frances O'Connor or even Bonnie Somerville for any of my problems with the show. Even Lucy Liu, so prone to caricature (and so gifted at it) that I can't believe her as a real person, isn't bad. They're just trapped in this uber-chick lit bore. Wanna know the saddest part? I was looking forward to this pilot FAR more than to NBC's slightly more comedic "Lipstick Jungle." That augurs poorly.
Desire to Watch Again: Less than zero. I'd love to get those manly CEOs from "Big Shots" together in a room with those womanly executives of "Cashmere Mafia." Then I'd blow up that room, setting all of those talented actors free. 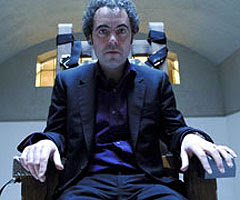 Show: "Jekyll" (BBC America, Drama)
The Pitch: A modern spin on "Dr. Jekyll and Mr. Hyde," sortta.
Quick Response: Created by "Coupling" auteur Steven Moffat, "Jekyll" is a wacky mixture of styles and tones. Sometimes it's a smart spin on the central issues of Robert Louis Stevenson's novel, a man losing control with his own duality and how this sort of unbridled id might be handled differently in the 21st century than in the 19th. Sometimes it's just a creepy psycho-horror drama. Sometimes it's a conspiracy drama of the sort that British and American TV audiences have become increasingly familiar with in recent years. Sometimes it's self-aware near-parody, a compilation of quips and one-lines and winking at the audience. As reimaginings of this concept go, it may not be as good as what Alan Moore did in "League of Extraordinary Gentlemen," but it's a damn sight better than the Sean Young/Tim Daly vehicle "Dr. Jekyll and Ms. Hyde." The anchor is leading man James Nesbitt, he of the generally perpetual hang-dog expression. It's Nesbitt's familiar solemnity that makes his transformation into his darker alter ego so entertaining. It's done with minimal makeup and hair work, plus black contact lenses. But really Nesbitt has to do most of the or himself, giving his "Hyde" side a spin that's part Jim Carrey, part Jack Nicholson, part Richard D. James on the cover of Aphex Twin's "Richard D. James Album." Nesbitt goes from tortured and internalized to torturing and externalized with broad, over-stated flair and it's fun to watch. It's also good to see the lovely Michelle Ryan, she of NBC's "Bionic Woman," sporting her natural accent. And it's different to see Gina Bellman (Jane on "Coupling") is a serious role as the main character's confused wife.
Desire to Watch Again: Strong. Some parts of the first two episodes (to be aired in a single block in familiar BBC America style) don't really work, but enough of it does that I'll be looking forward to see how the story plays out.