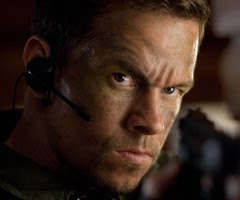 "Shooter"
Director: Antoine Fuqua
Fien Print Rating (Out of 100): 61
One Word Review: Muscular
In a Nutshell: Yeah, I'm a general snob, but every once in a while, I just to like applaud the proficiency of a movie like "Shooter," an it-is-what-it-is bit of "Rambo"-meets-"Dirty Harry"-meets-"The Bourne Identity" table-turning. In fact, if it weren't for at least 20 minutes worth of "We have no idea how to end the flipping movie" stumbles at the end, "Shooter" may have gotten as many as 10 additional points in my obscure and largely meaningless ratings system. What ultimately could have been a impressively contained little movie ends up only being a better-than-average genre entry, because director Antoine Fuqua couldn't leave well enough alone...

The "We're only facing one man, but he's an expert who knows everything we'll do before we do it" genre is a personal favorite of mine when executed properly, so there's fun in the almost immediate recognition that Wahlberg's character isn't just an ace sharp-shooter, he's the best trained Marine in the history of the universe. You know how Macgyver used to say he worked better without guns? Marky Mark's Bob Lee Swagger is as resourceful as Macgyver and he likes guns just fine. Oscar Nominee Marky Mark (his new full name) plays the part with just enough dead-pan intensity to carry the movie all around him, even when it has to expand its universe to include a barely written FBI agent (Michael Pena) and his even-more-underwritten FBI foil (Rhona Mitra). Fuqua carries the rest of the weight, orchestrating several nice set location set pieces in both urban and rural environments.

I can't tell if there's an audio problem with the soon-to-be-released DVD, if my home sound system (i.e. the speakers attached to my decade-old TV) stinks, or if the actors were all instructed to be unintelligible, but I found myself straining to hear every word of dialogue, a frustration given that every explosion and gun-shot is crystal clear. You've got Wahlberg mumbling, Danny Glover slurring his words, Kate Mara affecting a serviceable deep-South twang and Rade Serbedzija talking like Rade Serbedzija. I'm just assuming that little in Jonathan Lemkin's script required total intellectual understanding.

The question of whether or not "Shooter" is supposed to operate as some sort of liberal catharsis for the past seven years of Bush Junior Republican rule is one that I almost don't want to get into. Although Bob Lee is quick to say he didn't like the guy before the current president either, there's little question that his outrage is about the form of militarized capitalism that has become increasingly common under the current administration, a world in which moral right and wrong have been replaced by the more economic haves and have-nots. With Ned Beatty popping up as a thinly-veiled version of Dick Cheney, "Shooter" probably has a good amount of political annoyance under its surface, but I doubt that Fuqua was the man to delve into that subtext.
Tweet