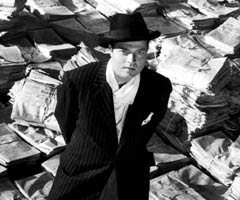 These are, allegedly, the 10 Greatest American Films of All Time according to the latest AFI poll.

Since every other blogger on the Internet is professing to have an opinion, I guess that I ought to as well. Let's just say that I have a few quibbles, but isn't that the point of lists like this?

Follow through after the bump, because this will probably get long and rambling.

Before going any further, my advice is to wander over to Edward Copeland on Film, where he has done the great service of listing both the AFI's New 100 and the AFI's 1996 100 and without his dueling lists to show how things have gone up or down, I probably couldn't be bothered to do this. Thanks, Eddie.

So much for the past decade: One of the points of redoing the AFI list was to expand the range of eligible films to include 1996-2006. As a result, the list now includes "The Lord of the Rings: The Fellowship of the Ring," "Saving Private Ryan," "Titanic" and "The Sixth Sense." The only addition there that I find absolutely ludicrous is "The Sixth Sense," which should not legally be allowed to rank ahead of "Do the Right Thing," "The Last Picture Show," "Pulp Fiction," "The French Connection" or "Goodfellas" on any rational-minded list. If we're looking to add more spooky genre films to the list, how about Robert Wise's "The Haunting," William Friedkin's "The Exorcist" or Tobe Hooper and Steven Spielberg's "Poltergeist"? Just off the top of my head. And what happened to the other films from the past decade? What of films like "L.A. Confidential," "Fight Club," "The Matrix," "Three Kings," "Brokeback Mountain," "Traffic," "Million Dollar Baby," "Memento" or "Boogie Nights"? I'm not saying any or all of those needed to be added, but they were at least eligible and rejected.

The Top 10: You don't argue with "Citizen Kane" at No. 1. Ever. There's just no point. One of CBS' banal talking heads said that every single frame of the movie has a meaning and that's probably enough. When I'm feeling ornery, I like to call "The Godfather II" the greatest American movie ever. I prefer it to "The Godfather" on nearly every level and consider it to be the smarter, deeper, more textured work. That's just me playing Devil's Advocate, though. But I'm not one of those snobs who tries claiming that "Gone With the Wind" is a racist old relic -- it's as gorgeously constructed a piece of studio filmmaking as ever existed, that in addition to being a racist old relic. It can stay. The only film in the Top 10 that wouldn't make at least my Top 25 is "Raging Bull," which might even get left off my list of Top 5 Scorsese films, much less a ranking of the five best American films ever. Yes, it looks visionary if you show a couple moments of the black-and-white cinematography, but its narrative clunkiness is always too much for me.

The Great Shame: "Intolerance" at No. 49? Really? REALLY?!? Don't give me that kind of chicken-hearted bullshit. If you're going to honor D.W. Griffith as the cinematic pioneer he so clearly was, just suck it up and make it clear that "Birth of a Nation" is admirable for its technical innovation and repellent for its ideology. Make it clear that an endorsement of the film's aesthetics is in no way an endorsement of its values and then include Larry Fishbourne and Spike Lee talking about what an awful, evil movie it is. But don't try to tell me that a sufficient number of AFI voters loved and worshipped "Intolerance" on its own merits to justify its inclusion in the top half of this list. I'm honestly not going to believe that for a second. Like it's a coincidence that "Intolerance" ranks almost exactly where "Birth of a Nation" ranked last time? That's just comical.

Silence Is a Bit More Golden: One of the criticisms leveled against the first AFI list was the lack of great silent films outside of "Birth of a Nation" and Charlie Chaplin. As a result, we get "The General" soaring in at No. 18 and "Sunrise" taking No. 82. That's still not enough, but it's a start. But here's the problem: If you're going to make the token inclusion of "Sunrise," but then have it setting there as a less great film that "Spartacus" or "In the Heat of the Night" or "The Deer Hunter," you're just begging for ridicule. Once you include something like "Sunrise," its place is in the Top 20, not behind "Forrest Gump." Oh and seriously, what's "Forrest Gump" even doing on the list at this point?

Welcome to the List: In addition to those previously shunned silent films, several other films were added to cover for major flaws in the first list. Having Bob Fosse ("Cabaret" at No. 63), Peter Bogdanovich ("Last Picture Show" at No. 95) and, particularly, Preston Sturgess ("Sullivan's Travels" at No. 61) on the list just makes things look better. And having "Do the Right Thing" on the list at No. 96 eliminates any concerns of a racial whitewash. That was a joke. 100 films on a list and only one from a person of color? That's impressive, though not as impressive as 100 films without a single female director. If I were on the AFI team, I'd have juggled the list to put "Big" or "Fast Times at Ridgemont High" down at the very very bottom, just to get a woman on the list somewhere.

Come back, Shane: Actually, "Shane" is still on the list. You know what isn't? Lots of good stuff. "The Third Man," "The Manchurian Candidate" and "Rebel Without a Cause" are all comfortably inside my own personal Top 50, but they're off the AFI list. Because "Toy Story" is on, apparently "Fantasia" is off, since the AFI appears to have a two-animated-film quota (where, I'd ask, are "The Incredibles" or "Dumbo"?). While John Ford's "The Searchers" went from No. 96 to a much more appropriate No. 12, Ford's "Stagecoach" went from No. 63 to nowhere. And while I understand why "Dances With Wolves" would plummet off a list like this, what did "Fargo" do wrong in the past decade to suddenly become a lesser film? It's never been my favorite Coen Brothers film, but if "Miller's Crossing" and "Raising Arizona" weren't going to make it, surely "Fargo" could have stayed?

Movies I Value More than the AFI: I'd have found a way to get "Godfather II," "Chinatown" and "The Apartment" into the Top 20 for sure. I've already mentioned a few of my relative preferences, but I'd also have elevated "The Philadelphia Story," "Modern Times," "Bringing Up Baby" and "Dr. Strangelove." Oh and I'd have replaced "Star Wars" with "The Empire Strikes Back."

Movie I Most Wish Were on the List: Really, I want "The Third Man" and "Manchurian Candidate" back, but if I can't have then, how about adding "Groundhog Day" somewhere at the bottom? If voters saw that it was acceptable to have "Groundhog Day" on the list at all, I'm sure they'd get it moving up.

I could keep going for a while here, I suspect. Instead, I'll stop. Gotta stop.
Tweet