Take Me to the Pilots '07: ABC's "Pushing Daisies" 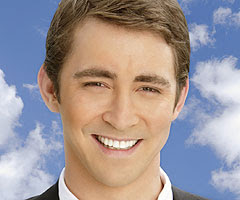 [It's here that I remind you not to view this as a review so much as a collection of first impressions. I doubt ABC would mind one way or the other, though, because I really love "Pushing Daisies." I'll get to the rest of ABC's pilots by next week. For now, I'm concentrating on Showtime's "Meadowlands" (trippy and interesting) and maybe finally getting around to "John From Cincinnati" and "Big Love" (I'm behind). So "Big Shots," "Dirty Sexy Money" and "Women's Murder Club" will go under a separate heading. Oh and although Sepinwall is too busy whoring himself out in the almighty name of Tony Soprano, he'll eventually get around to looking at these pilots.]

Show: "Pushing Daisies" (ABC dramedy)
The Pitch: If you loved "Dead Like Me" and "Wonderfalls" and "The Amazing Screw-On Head," here's a show that may be even more quirky...
Quick Response: I've never seen a pilot that so clearly DEMANDED a "Save This Show" campaign earlier and more urgently than "Pushing Daisies." Well, maybe I have. When FOX sent out "Wonderfalls," I knew I loved the pilot and I knew there was no way it could possibly succeed and it's no coincidence that "Pushing Daisies" is from Bryan Fuller, the man largely responsible for those three shows I mentioned in my pitch, as well as for some of this season's better episodes of "Heroes." The thing that may give "Pushing Daisies" -- about a man with the ability to resurrect the dead, albeit briefly and inconveniently -- is that it's quirky and loopy and whimsical where "Dead Like Me" was quirky and brooding and cynical. While I may have instantly fallen in love with Jaye from "Wonderfalls" and George from "Dead Like Me," I can understand why they weren't necessarily accessible to viewers who, well, aren't me. Despite his twisted past, Lee Pace's Ned is less of a sarcasm-spewing anti-hero than a swoonably romantic lead, which will improve the show's prospects. I liked Pace on "Wonderfalls" and this would be a star-making performance if ABC could get anybody to tune in to a weird-ass new dramedy without a powerhouse lead-in. Sure-thing supporting performers Chi McBride, Kristin Chenowith will also help (as will Swoosie Kurtz and Ellen Greene if they're going to be regulars). I'm tempted to wonder how well episodes will play without Fuller's marvelous wordplay (assuming he won't go all Aaron Sorkin on this one) and Barry Sonnenfeld's direction (the best think he's done since either 1997's "Men in Black" or the pilot for "The Tick," depending on your point of view). Then again, if viewers stupidly shun this one like Fuller's other shows, that won't become an issue. Others are likely to find the visuals, narration (courtesy of audiobook legend Jim Dale) and storybook format to be a little twee, but I didn't. As I said, let's start deciding now what we can send ABC to urge the network to reconsider canceling "Pushing Daisies." Flowers? Pies? Honey? Kristin Chenowith (she's small, persuasive and easily transportable)?
Desire to Watch Again: Strong. To date, "Pushing Daisies" is the best pilot I've watched this summer.
Possible Role For Eric Balfour: The only thing more likely to get "Pushing Daisies" cancelled would be adding Eric Balfour to the cast.
Tweet