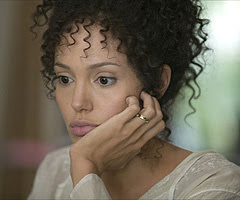 "A Mighty Heart"
Director: Michael Winterbottom
Fien Print Rating (Out of 100): 67
In a Nutshell: [Before I continue with my review after the bump, I want to join what I hope will be a general Internet critic Uproar over Variety's coverage of the death of E! veteran writer Andy Jones. Jones suffered a heart attack at a press screening during the week and was dead by the next day. I wasn't friends with Andy, I sat at at least a dozen junket roundtables with him. We was always enthusiastic and always dogged -- if there was a question he wanted to ask, he'd get it in and he'd get an answer, whether it flustered the talent in question (or his fellow journalists) or not. Sometimes that produced awkward moments and sometimes great answers. That's a risk you have to take to do your job. He had his fatal heart attack -- his second -- at a screening of "A Mighty Heart." In private conversation, I can understand the need to discuss the irony (not really "irony," but "coincidence" actually) therein. But Variety's use of "Film critic suffers fatal 'Heart' attack" as its headline is tactless and embarrassing. I doubt the copy editor in question would like to have his or her death used as an occasion for a cheap pun. And similarly, Diane Garrett's semi-obit for Jones is marginally disgraceful -- it's less about Jones and more about the difficulties surrounding the controversial film. Why make a man's death into a footnote in a cinematic saga that had nothing to do with his death? Jeez. (UPDATE: As of Sunday, the Variety headline for the Andy Jones story had been changed to the generic "Critic suffers heart attack at screening.") ]

Although it's been positioned very much as an Angelina Jolie prestige film, an Oscar vehicle if ever there was one, "A Mighty Heart" is completely Michael Winterbottom's movie, a showcase for one of cinema's most prolific and often infuriating talents. Watching "A Mighty Heart," whenever something came across as troublesome or less-than-effective for me as a critic, I never doubted for a second that what I was watching and what I was feeling was exactly what Winterbottom intended for me to be watching and feeling. That makes evaluation complicated, because I want to contemplate authorial intent, particularly coming from a man as idiosyncratic as Winterbottom. And I want to value authorial intend over viewer expectation, since it isn't Winterbottom's fault that he didn't make the kind of movie that Paramount Vantage named and promoted.

Going into "A Mighty Heart," you probably think that the movie is about how Mariane Pearl dealt with husband Daniel Pearl's death and how she came out of it prepared to live life for their son. You might expect a sentimental story filled with huge emotional moments of both sadness and catharsis. It's not that. In fact, after seeing the movie it remains unclear whose heart the title refers to and whose movie it's supposed to be. Although Jolie's Mariane (not quite in black-face, but certainly perpetrating some sort of embellished ethnic charade) is at the center of the movie, she's a steady and passive point at the background of a very busy police procedural. Like David Fincher's "Zodiac" earlier this year, "A Mighty Heart" is a police procedural that attempts to simulate -- near documentary-style -- the chaos of an on-going investigation that viewers know will end in disappointment.

And even within the procedural aspects, Winterbottom plays it straight. My movie-going companion and I discussed afterwards what a different film Oliver Stone would have made about the kidnapping of an American journalist in Pakistan and the attempts to track down his captors and rescue him. The movie could have been a sensationalistic political thriller. It could have been a sociological or anthropological deconstruction of the ways these investigations are carried out in different countries compared to the "Without a Trace" or "CSI" model that we know so well. Peter Berg's upcoming "The Kingdom" looks like it combines those two approaches. It will aim to excite and thriller. At the end of the day, I'm not sure what Winterbottom is aiming for here. Is he just trying to inform? "This is what happened to Daniel Pearl. Here's how people tried to save him. Here's the people who were there. It didn't work." The movie is almost completely subjective -- we know what Mariane and the people trying to save Daniel know, without any hypothesized and omniscient cuts to Daniel in captivity. All viewers can do is go along with the story, which is a cold process.

Jolie is very good and only slightly distracting in her Jolie-ness. If you happen to know that Mariane is more clearly foreign and more clearly ethnic than this American movie star, that can get distracting, but if you don't, then Jolie's performance is admirably grounded and restrained until Winterbottom asked that it cease to be restrained (again, an obvious directing choice, even if it will rub some viewers the wrong way). Jolie, though, is such a big star that she's jarring amidst the relative anonymity of the rest of the cast (Dan Futterman makes a fine Daniel Pearl, though Will Patton's Randall Bennett is a weirdly conceived character and Patton may be too recognizable). The movie's most interesting turns come from Archie Panjabi and Irrfan Khan as the Pearls' Indian colleague and a local police captain, respectively. They never upstage Jolie, but they care whichever scenes she isn't in. Like the gritty photography, all of the performances are understated and naturalistic, again to prevent excessive emotional investment.

To boil my intellectual uncertainty on this film down, let me say this: I came away from "A Mighty Heart" more interested in Winterbottom's intentions than in the cumulative effect of the movie he'd made.
Tweet