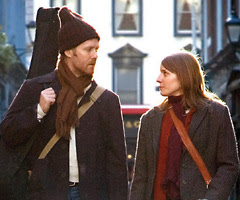 "Once"
Director: John Carney
Fien Print Rating (Out of 100): 79
One Word Review: Sparkling
In a Nutshell: [Before getting to the movie, I wanna mention that this was the first film I've seen at the new Landmark Theatres flagship in West L.A. This is the theater closest to me, geographically, and I get the impression that I'm going to see many, many, many more movies here in months to come (so they may want to set up a members rewards program... hint... hint...). The theaters are comfortable and exactly large enough to showcase the kind of niche faire they're likely to be presenting. I love the free parking and so far the film selection looks to be good. On the complaint side, the theaters on the lower level aren't well enough soundproofed and there was definite audio-bleed down from the theater on the top level, though since this theater hopefully won't be showing "Transformers," I doubt that'll make a massive difference. I'm also a bit concerned at the tight quarters, specifically the restroom area and the area immediately surrounding the lower group of theaters. On a slow Saturday afternoon, there weren't any problems but when it gets to be Oscar season and this venue hosts a number of exclusive limited showings, it could become awful in a hurry. Christina has pictures and a more complete review of the venue over on her blog, if you wanna know or see more.]

"Once," a dirt-cheap little Irish musical from writer-director John Carney, is the best film of its type since "Lost in Translation" or possibly even "Before Sunset." The difficulty, I guess, is in quantifying what, exactly, "its type" happens to be. Like those other films, "Once" is a passionate, platonic romance, a movie that just lets its two lead characters exist and relate together without having to force upon them the sorts of rom-com contrivances you'd see in a movie like "Music & Lyrics" (a film that might otherwise have superficial similarities to "Once").

It's safest not to over-analyze the spell that Carney and non-actor leads Glen Hansard and Marketa Irglova cast here. The story -- a lovesick busker/vacuum repairman and a Czech ragamuffin meet-cute in Dublin and sing a little -- isn't deceptively simple. It's just plain simple, though Carney's rhythms are his own, not dictated in any way by the plot demands, again, of a standard Hollywood romantic comedy. The conversations between the two main characters -- they have no names, though that's less obnoxiously twee than it sounds -- aren't profound or clever. They're just conversations, though their words weight heavily with underlying feelings. The songs -- written and performed by Hansard and Irglova -- add extra layers, but this isn't the kind of musical where people burst into verse about what they're thinking or feeling. The characters' lives are invested in music, so they sing when they'd sing and the songs are more-than-serviceable singer-songwriter-style anthems (available and already being frequently downloaded off of iTunes).

And the movie's charm certainly doesn't come from its look. Shot on DV for a reported 180,000 euros, "Once" certainly isn't a pretty film and occasionally it's distractingly jittery, out-of-focus and grainy. That might be way I find myself preferring "Lost in Translation" or the "Sunset" films, simply because Sofia Coppola and Richard Linklater found ways of matching the aesthetics of their films to the cities their love stories occupied, while Carney has mostly matched his look to the limitations of his budget.

But the look suits the slightly rough characters at its center and the camera's freedom and mobility suits the easily accessible hooks of the song. And Hansard and Irglova are a beguiling screen couple, with their lack of experience making Carney's dialogue seem natural and unstudied, where trained actors might have exposed how little these characters are saying. Hansard is the slightly more known quantity -- music aficionados know him from the Frames, while I have vague memories of him from Alan Parker's cheesy-yet-loveable "The Commitments" -- but Irglova, expressively open and beautiful in a very un-Hollywood way, is the breakout performer.

"Once" is still in ultra-limited release, but this is one of those films that's probably best to see early, before the hype becomes all encompassing, rather than later once your expectations have moved to unreasonable heights. It's a gem of a movie, but a small gem.

It's also one of those films that expose the reliable idiocy of the MPAA's Ratings Board. As gentle, sweet and humane a movie as "Once" may be, it's just another R-rated film for the raters, who probably passed their quote of "f" and "s" words very early on. I'm not sure why anybody aged 12-to-16 would feel the desire to rush out to see "Once," but if they were so-inclined (and good for them), I wouldn't hesitate to sign off for those young viewers.