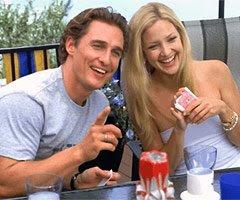 The way I reckon it, you never want to actually get a *good* movie on an airplane. You don't want to have to think about the movie or to get so involved that when the woman next to you has to go to the bathroom three times in 90 minutes you want to throttle her because she's interrupting your dime-sized cinematic experience.

You want movies like "The Spiderwick Chronicles" or "Fool's Gold," movies that are either innocuously pleasant or so brain-deadly awful that they'll kill time without excessive investment. But not as brain-deadly awful as "Rush Hour 3." Even bored on an airplane, I couldn't make it through more than 30 minutes of that one.

Side note before I talk briefly 'bout the two movies that got me to Chicago and back: Is there a revolt coming against the airlines? Like a bloody, pitchfork-waving revolt? The number of levels on which air-travel keeps declining is stunning and the number of levels on which it's about to start sucking -- $15 first bags, $2 cans of Coke -- keeps growing. I know that the price of gas is crippling, but there can't be any excuse for the levels of fraud and rudeness that accompany even a basic four-hour direct flight. And none of the airlines is innocent. Except maybe for JetBlue. I've only flown JetBlue once and it was a really good flight.

Anyway, some quick thoughts on "The Spiderwick Chronicles" and "Fool's Gold" after the bump...

"The Spiderwick Chronicles"
Director: Mark Waters
Fien Print Rating: 66
In a Nutshell: Very rarely original, but completely satisfying as an effects-heavy movie for kids, "Spiderwick Chronicles" wasn't a movie I had much interest in paying $10 bucks to see in the theaters, but it exceeded most of my expectations. You can't go wrong with Mary-Louise Parker, even though I didn't exactly understand how she and Andrew McCarthy produced three children with European accents (or two children and one duplicate).

But wait. What the heck was Nick Nolte even doing in this movie? I mean, Roberto Benigni stole his Oscar and that was it? He just lost it? I take that back. I just said the other day that I liked his over-the-top performance in "Hulk." Nevermind.

I couldn't tell on the tiny screen how the effects were, but they didn't aspire to much more than intimate, low-scale cuteness or scariness, so I didn't have much to complain about there.

And the writing was much sharper than I'd have guessed. Do I credit John Sayles for adding enough color that the relationship between the kids and newly single mom felt fresh and believable? I think so.

As a director, Mark Waters is a proficient journeyman, a categorization I don't figure as an insult. He adds little and screws up little.

"Fool's Gold"
Director: Andy Tennant
Fien Print Rating: 23
In a Nutshell: I contrast Waters with Tennant, whose filmmaking touch is leaden. One of my very first posts on this blog was, if memory serves, a meditation on just some of the awfulness of "Hitch." And "Fool's Gold" is worse than "Hitch."

It's one thing to wonder how one director after another has worked to drain Kate Hudson of the appeal that seemed so natural in "Almost Famous." It's another thing that directors keep taking chances on Matthew McConaughey when the actor decided at least a decade ago that he won't do anything other than coast on his abs and charm, utterly ditching the potential he showed in "Dazed and Confused" and "Lone Star" and "A Time to Kill."

As bad as that is, "Fool's Gold" has what may go down as the worst written and directed scene I've seen at the movies in years. For those who have seen it, it's the sequence where Hudson and McConaughey sit down with Donald Sutherland's wealthy benefactor and explain the story of the treasure they're seeking. It's at least five minutes and possibly ten of pure, horribly scripted exposition about Spanish history or some nonsense during which none of the characters even move. The camera just cuts from one medium shot to another as the actors read paragraphs of dialogue that mean NOTHING. If you're a writer, why do you need more than "There was a Spanish galleon that went down with millions of jewels. Nobody's seen it since" to set off your plot? The decision to insert little "National Treasure"-style historical clues and graverobbing only showcases how thin the movie's storytelling and action are.

Two good things about the movie:

At the very end, Hudson and McConaughey crash into the water in a seaplane. Now since this is a romantic comedy, they aren't going to die or really be in any jeopardy at all, so we know they're going to be fine. But since this was an airplane edit, there was a fade to black after the characters realize they don't know how to fly. Then two seconds of black and a cut to the characters swimming in the water relieved. That censoring was silly enough to amuse me.

And also silly enough? The performance by Alexis Dziena as the spoiled socialite daughter of Sutherland's character. It's a wooden subplot that provides yet more filler (three credited writers couldn't come up with anything better), but Dziena is bizarrely alive and funny despite not having a single funny line to say or action to perform. It's like she was just allowed to do whatever she wanted and rather than doing the latest in an endless line of Paris Hilton impressions, she did something weirder and less explainable.

I'm still trying to formulate an opinion on "Kung Fu Panda" that goes deeper than "I wish the whole movie had been animated in the style of the opening dream sequence." I'll let you know if I get there.