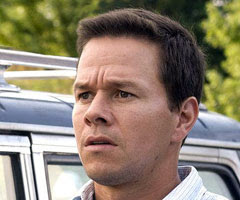 "The Happening"
Director: M. Night Shyamalan
Fien Print Rating (Out of 100): 15
In a Nutshell: Yesterday afternoon was hot and the smell of tar was seeping insidiously into my apartment, making my head swim and my stomach spin. I'd like to blame those factors for my decision to go out and see "The Happening," but I know that I probably would have gone even if my apartment had been cool and clean and I hadn't had an expiring coupon in my wallet for a free popcorn.

I mean, I've given up on Shyamalan. He's a hack. "The Sixth Sense" was just something flukish that happened -- and a movie that I didn't really like all that much, even at the time -- and "Unbreakable" was just an statistically anomalous deviation from the norm. After "Signs" and "The Village" and "Lady in the Water," it's clear that those three movies represent Shyamalan's expected level of output, not anything that came before and that expecting anything better at this point is just folly. Even the things that he once did well -- twist endings, moody atmospherics, acceptable cast performances -- are no longer in evidence.

And yet you keep wondering when he'll hit bottom. Or at least I do. And the amazing thing is that as bad as "The Village" and "Lady in the Water" were, "The Happening" is even worse. It's Ed Wood bad. Shyamalan has said in interviews that all he aspired to do with "The Happening" was make the best B-movie viewers had ever seen. But what does it mean that he made an awful B-movie?

There's more review after the bump.

[OK. There's not much to spoil about the movie, since there are no surprises or twists. I am, however, going to give away most worthwhile details about the movie, so if you really want to someday see this movie without being spoiled, I'm afraid I'll urge you to stop reading now.]

So yeah. Shyamalan is calling this his B-movie, but why did he make somebody foot a $60 million budget for the production? And where did that money go? I know Mark Wahlberg is a star, but even if he made $15 million, there's still $45 million floating around on a relatively ugly movie -- despite Tak Fujimoto behind the camera -- that includes almost no special effects or production design. If I were an auditor, I'd want to investigate how Shyamalan required $60 million for this, while Danny Boyle made "28 Days Later for $8 million. It's mighty profligate.

"The Happening" is Stephen King's "Cell" meets John Wyndham's "Day of the Triffids." That is to say that the movie's underlying message has something to do with humans failing to properly communicate in a modern age, but at the end of the day, it's about the terror that comes when the plants start to attack.

But these aren't active and aggressive killer plants like in "Triffids" or "Little Shop of Horror." These are lazy and nefarious plants that prefer to release chemicals to have us kill ourselves.

Step up, plants. If you ever want to control the world, you're going to have to get your little green hands dirty.

But I digress. Because the plants aren't actually walking through the streets whacking people with their poisoned tentacles, "The Happening" boils down to two types of scenes, one in which people who don't care about kill themselves and the other in which Shyamalan sticks the camera in Mark Wahlberg's nostril and asks him to express confusion and disbelief.

Now that we're forever required to call him "Oscar nominee Marky Mark," I don't begrudge Wahlberg for feeling that this is the right time to expand his comfortable limits. We know he can play the brash guy, the smart-ass guy, the guy from the streets. When Wahlberg is at his best, it's easy to figure why he works: He looks like a hard-edged tough, like a Marine, like a soldier, like a gangster. But his voice is soft and surprisingly high, it's a disarming counterpoint to the way he looks. But I think you can probably look through Wahlberg's performances and determine that the softer he has to play overall, the worse he is. He's not an Everyman. That's what his character in "The Happening" requires and Wahlberg is too far against type. Asking this man to play a passive intellectual, to play a near-cuckolded husband, to attempt to think on-screen is just a waste. But Shyamalan's ego is too big to realize. This is a man who got Bruce Willis to play soft, who made Paul Giamatti into a romantic lead, who got Mel Gibson to play Jewish! That last part isn't true. But still, Shyamalan puts Wahlberg in close-up and tries to show his inner tumult and gets nothing back in return. I can't begin to say how much better "The Happening" would have been with an Ed Norton or a Sam Rockwell or a Ryan Gosling in the lead. Hell, you make "The Happening" a Ryan Gosling vehicle and I bet it rises to the level of mediocre in an instant.

With Wahlberg, you aren't sure if you're suppose to laugh at his confusion. It's also hard to know how to react to Zoey Deschanel, whose indie-quirky mannerisms are at odds with the sort of wooden-nonresponsive performances Shyamalan prefers. While a dozen (or more) actors could have played Wahlberg's part, I'm not sure which actress could have retained dignity in Deschanel's role, so I sympathized with her on that level. Meanwhile, this was the first time I ever watched a Zoey Deschanel performance and though, "Boy, she looks like her sister Emily!" What can I say? I like me some "Bones."

Thinking back over Shyamalan's body of work, though, I can't think of any time he's every been effectively funny. Levity isn't a tone he understands. He's like Ah-nold's Terminator at the end of "T-2," valiantly committing career suicide in an effort to try comedy, saying, "I know now why you laugh, but it is something I can never do." The key to selling those moments or characters as comic is in contrast, but are those two aforementioned characters any more one-dimensional and intentionally silly than Spencer Breslin and Robert Bailey Jr. suddenly popping up as teen sidekicks engaging in really awkward conversations? And why are those over-the-top characters supposed to be funny, but we're supposed to be jarred and intrigued and maybe scared when Betty Buckley pops up as the reclusive Mrs. Jones? Poor Betty Buckly.

Shyamalan still has a potent eye at times, but he lacks confidence in his imagery. The bodies falling from the sky or hanging from trees make for a potent visual. But they should be chilling and not necessarily scary, per se. Shyamalan uses the soundtrack, both the over-amplified foley work and James Newton Howard's score, to try to make viewers jump.

Why does he need to do that? "The Happening" isn't even vaguely scary. The entire second half of the movie boils down to characters fleeing from the breeze. Oh no! The ferns are gonna get me! But Shyamalan keeps pushing for those scares, keeps setting up his shots as if something terrifying will be there around the next corner, but every one of those loaded Hitchcockian angles is a cheat that he never intends to pay off. Because he can't. He can't change the fact that... again... it's just the wind and a bush.

The glory of the 1950s creature features that Shyamalan would have done well to better emulate is that as absurd as it might have been for an ant to become gigantic and terrorize a town, you just needed to say the word "nuclear accident" and viewers were on board. On one hand, Shyamalan wants to drive home a point that nature is hard to explain and we still don't understand why the birds and the bees and the flowers and the trees operate the way they do. And he tosses out chemical spills and terrorism and nuclear accidents as convenient scapegoats that, in this case, fail to provide adequate explanations. It's an environmental thriller, but after the first act, he doesn't blame global warming or climate change or anything like that, so the asinine critics calling this a horror movie that only Al Gore could love are reading in explanations that Shyamalan purposely avoids. If, however, the culprit is impossible to comprehend... STOP TRYING TO MAKE US BELIEVE IT COULD HAPPEN. Characters keep providing botanical evidence and real world precedent, telling stories that seem really out of place in context, but the more that somebody tries telling me that something like this really could happen, the more I stop and go "Not like this, it couldn't." Because Shyamalan can't decide if he wants to make nature unknowable or if he wants to anthropomorphize it to the point at which plants have strategies, motivations and desires. And once you're anthropomorphizing the plants to that degree, they might as well sing and dance.

And in the place of a twist ending, Shyamalan substitutes two talking heads on a television screaming at each other about the events of the movie, again trying to explain how unexplainable everything is. As I look back at my Zap2it review for "Lady in the Water," I complain about the exact same thing. Shyamalan's movie's all have a thematic undercurrent about belief and faith, but the filmmaker refuses to trust that his audiences will fully believe in him.

The more you say, the less things are still spooky.

But Shyamalan can't resist blabbing. For a script with so little actual dialogue, at least 80 percent of it is superfluous. How many times must Wahlberg say, "Oh my god!" How many times, in the midst of a horrifying global event, must Deschanel's character lean over and say, "I'm scared." We know! Or Deschanel's standing in a parking lot. She and Wahlberg are looking for a car. Deschanel says, "There's a car," at the exact second that a car pulls up directly next to her in the lot.

There are times where it really seems like Shyamalan doesn't get the English language. Like John Leguizamo's character is saying where his unseen wife is heading and he says something like, "She's going to New Jersey, to the town of Princeton." "To the town of Princeton." As if long-term residents of Philly needed clarification that Princeton is a town. In New Jersey. It's strange that the addition of one or two extra words in a sentence would irk me so, but Shyamalan's characters do that all the time and it's just not the way people talk.

And groups don't behave the way Shyamalan seems to think. In at least three moments of chaos, every time one person talks, the rest of the group is silent. Then, when one person declares, "Let's go," the group bolts out the door in unison. He has no understanding of group-think or mob-mentality or the ways that people under stress respond to this sort of communal horror.

The only *good* part of that shortcoming is that Shyalaman never lets "The Happening" become a 9/11 parable. The Evil Plants aren't stand-ins for The Terrorists. It's almost appealingly naive and post-ironic how Shyamalan uses bodies falling from the top of a building as an visual with no referentiality to the people jumping from the World Trade Center. The image has become iconic, but Shyamalan is stubborn enough to ignore it.

OK. I'm at the point where I could either ramble on, or I could go to the gym.

I've given this movie more time than it deserves already...