Is Curt Schilling a Hall of Famer? 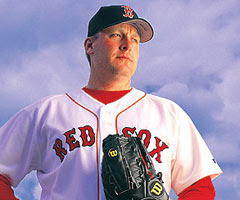 Readers of this blog know that I'm a Red Sox homer. And people who have been to baseball games with me in recent years know that I'm prone to wearing my official MLB Curt Schilling jersey. Just for fun. And the most exciting game I've ever been to was Curt Schilling's near-no-hitter last June.

So today, with Schilling discussing his pending surgery and potential retirement with just about anybody who would listen -- If you wanna do an interview, Curt, I'm game -- I took pause.

If Schilling never throws another pitch, he retires with 216 wins, 3116 Ks and a lifetime 3.46 ERA. More than that, he retires as The Guy With The Bloody Sock, a postseason warrior who will never need to buy another drink in New England as long as he lives. He's got three World Series rings. He'll go out with a reputation as a Big Game Stud.

But does he belong in the Hall of Fame?

Follow through after the bump for some rambling. And if you don't care, a movie-related post'll probably be up tonight or tomorrow...

I started watching baseball in the early-to-mid-80s and when I think of the Big Game pitchers of my youth, the hurlers whose baseball cards I stockpiled, none of them are in the Hall.

The guy I really think of most, though, is Jack Morris. I've argued Morris' case before and, in this context, I'll do it again. A record of 254-186 and a difficult-to-question status as the best pitcher of the '80s, which I acknowledge is an arbitrary distinction. His ERA of 3.90 was high and his strikeouts (2478) were low. He was in the Top 5 in Cy Young voting five times, which is one more than Schilling.

In the postseason, he'll always have the 10-inning CG-SHO Game 7 win from 1991. That's about as defining a single performance as you could possible get. But he also won a world series in 1984 with the Tigers and another in 1992 with the Blue Jays. Granted that he had NOTHING to do with that 1992 title, as he lost three games in that postseason, but he won two games in each of his prior World Series and threw three complete games. He was a horse. He was THE horse.

Want another comparison who seems valid to me and isn't in the Hall? How about a Mickey Lolich, whose stat line reads 217-191, 2832 Ks, 3.44 ERA, 195 CG, 41 SHO. Remarkably similar to Schilling's on several levels. And Lolich had his best individual seasons after the pitching mound was lowered post-1968. When he retired, no lefty in baseball history had more Ks.

But if we let the bloody sock and the co-Series MVP make Schilling a Hall of Famer, surely Lolich's 1968 World Series should carried equal weight? He won three games, completing all of them. And facing off against the greatest single-season pitcher the game has ever seen, he beat Bob Gibson in Game 7. Lolich was in the Hall discussion, but he never REALLY threatened induction.

But who, from the current generation of starting pitchers, is going to make the Hall of Fame?

The Three Braves are locks. Maddux, Glavine and Smoltz should retire after this season and they should all go into Cooperstown together, albeit with the tacit acknowledgment that if Smoltz hadn't done the closer thing for three-and-a-half seasons, he wouldn't have saved his arm for those last three seasons as a starter and his Hall status would be cloudier. And perhaps there should be some tacit acknowledgement that the Braves REALLY ought to have won more than one World Series with a starting rotation led by three first-ballot Hall of Fame pitchers.

Randy Johnson's easy. Pedro Martinez is easy, though his window-of-dominance was nearly Koufax-esque in its brevity.

Since I've been outspoken in my support of the Hall of Fame candidacies of Mark McGwire and Barry Bonds, I can't be a hypocrite on Roger Clemens. He'd get my vote.

Mussina? That 260-148 record is utterly insane, but the lack of World Series titles and 20-win seasons is pretty crazy, too. Mussina has been a very good pitcher for 15 years. But do you realize that he hasn't had an ERA under 3.00 for a season since his first full season in the bigs? If he sticks around for two or three years, he'll probably get near-ish to 300 wins and he'll probably pass 3000 Ks. But was Mike Mussina a better pitcher than Tommy John? Or Bert Blyleven? Or Jim Kaat? Just asking... Was he a better pitcher than Schilling?

Things are going to get even worse after that. Look at the great pitchers in their low 30s... Tim Hudson's hit a wall. Roy Oswalt may have hit a wall. Roy Halladay's a horse, but he gets hurt every year. There's a very plausible reality that the career statistical measures for pitchers are going to have to be dramatically realigned after Mussina retires. Johan Santana has been the best starting pitcher in baseball for six years, but he finds himself at 29 with only 100 career wins.

My point? If you look back by the standards of baseball history, Schilling really is *not* a Hall of Famer. Or other people need to get in first for me to be satisfied. But looking forward, if Schilling isn't the standard by which you judge a Hall of Fame pitcher, pitchers may never be inducted ever again.