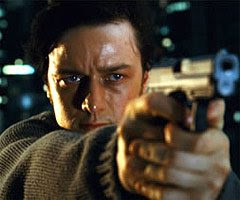 "Wanted"
Director: Timur Bekmambetov
Fien Print Rating (Out of 100): 35
In a Nutshell: In reviewing Timur Bekmambetov's "Night Watch" back in early 2006, I wrote: "I don't remember an iota of the plot, a single memorable performance or anything emotional or thematic from the movie, but I'm not surprised that every studio wants a piece of director Timur Bekmambetov. He's worth watching."

Somehow, I think I meant that as a compliment, though after seeing "Wanted," Bekmambetov's studio breakout feature, I'm tempted to wonder why. The reality is that "Wanted" delivers *exactly* what I could logically have expected. It's loud, brash, audaciously cool and even more audaciously stupid. And I'm not talking stupid in a "Excuse me, I studied physics in high school and I'm aware that bullets, cars and trains can't do the things they do in this movie." No. Not at all.

Also of "Night Watch," I wrote, "For all of the film's aesthetic spunk, though, the ethical quandaries of this universe -- issues of fate, free will and human nature -- are as banal as anything that bogged down the last two 'Matrix' movies."

Anyway, the rant is gonna continue after the bump. For the record, my starting Fien Print rating on this one is a "40," but I have a feeling I'm going to talk myself down to something lower before I'm done.

Stylized ultra-violence is all the rage these days and "Wanted" is no better than a more financially successful version of "Smokin' Aces" or "Shoot 'Em Up," two films in which the only goal was raising the stakes on the chaos, embracing the cartoonish anarchy. Now "Smokin' Aces" is a dreadful movie. And "Shoot 'Em Up" is a shockingly boring movie. Both movies at least have the sense to know they're not *about* a damn thing. They're not nihilistic, they're just nothing. With its dime-store ethics, "Wanted" is nearly dangerous in its degree of cluelessness.

James McAvoy, sporting an admirably acceptable American accent, is Wesley, a lifeless, passive, washed out cubicle monkey. He isn't a man at all until he discovers that his recently killed father was an assassin and he's genetically predisposed to be a killing machine himself.

What follows is a loveable saga of white male empowerment through violence. Now don't get me wrong, I also someday hope to undergo a process of remasculinization that includes punching somebody, killing somebody or, if we go back to the genre classic "Falling Down," bustin' up some minorities. I mean, for fuck sake, it's the reason millions of men nationwide are addicted to "Grand Theft Auto." The thing that "GTA" players don't seem to understand is that vicarious thrills will only help you regain your masculinity for so long. Eventually, you're going to have to go out there and get your hands dirty.

"Fight Club" at least had a sociological and anthropological explanation for why Edward Norton's character lost his mojo and, in the context of that initial explanation, his "What Would Tyler Durden Do?" lifestyle change makes some sense. Of course, with "Fight Club," the twist-ish ending to the movie makes a very clear value judgment on all of the choices that were made beforehand and recasts the entire movie through a new prism.

With "Wanted"? No dice. Wesley learns that he's a killer-by-birth, the heir to a guild of assassins (currently in negotiations with the AMPTP, one can only assume) following the instruction of the Loom of Fate, retaining balance in the universe by killing people the fates of determined need to be killed to keep humanity from filling our world with garbage and abandoning the planet in the hands of soon-to-be-semi-sentient clean-up robots with musical fetishes. Wait. Went too far there.

"Wanted" is based on a comic by Mark Millar and J.G. Jones, but it's really only based on the comic to a limited degree. In the comic, the society of assassins is really a group of supervillains killing off superheros. There's time travel, interdimensional jaunts and creatures made out of feces. In short, there was no way the narrative was *ever* going to make it to the big screen.

Nor was the morality. As I said, in the book, Wesley joins a cabal of highly skilled evildoers who view people as cattle. His training includes raping and killing hundreds of people, which he learns to do without blinking an eye.

Again, there was no way that shit was ever going to make it to the big screen.

But screenwriters Michael Brandt, Derek Haas and Chris Morgan want to have it both ways. They actually seem to want us to *like* Wesley, which Millar and Jones never wanted. In the process of trying to make us like Wesley -- a process helped by James McAvoy's perfectly fine performance -- they also just nod and condone the actions of the assassins' guild, as if there were some reasonable system of values in which it could be acceptable (the ending also comfortably condones the "kill one, save a thousand" message). In the book, the deaths of countless civilians can be ignored, because it's explained away as the action of these supervillains. In the movie, a train goes off the rails over some gorge or other and hundreds of civilians are almost certainly killed and the movie explicitly tries to distract the viewers from the carnage. I mean, Wesley's walking through a crowded train waving his gun, but when the train goes off the tracks -- it's in the trailer, I'm not spoiling anything -- suddenly all those people are never seen again. Save one Wesley, kill a thousand civilians? That's a fair ratio, right?

And why, if I might ask, does Wesley's pistol so totally replace his penis? One of the key signs that he's neutered in the beginning is that his bored girlfriend is having sex with Bright Abbott (or a character played by Chris Pratt). So he gets his manliness back with the gunfiring and all that stuff, but his libido? That never returns. He has Angelina Jolie wandering around him naked and she can do that because she knows that even if Wesley's comfortable killing, he's just a glorified castrati. At least in the book, Wesley gets to have sex with Jolie's character.

Message of the comic: Because you are complacent, you're allowing the villains to rule the world.

Message of the movie: It's not that killing is necessarily "right" or "good," but it's sure cool!

I think there may, incidentally, have been efforts at making "Wanted" into a "Fight Club"-style satire, but Bekmambetov's comic touch is lacking. I didn't laugh once at "Wanted," so even if the problem is just my sense of humor, that's a pretty big disconnect.

Some critics of "Wanted" are going to say that it's the victim of visual overkill. I'd say there's a difference between overkill and stylistic redundancy.

Assassins with the ability to make bullets bend at will? Well, that's stupid, but it's stupid *cool*. I dug it the first couple times it was demonstrated. I dug it when Wesley does it for the first time, bending a bullet around The Lovely Angelina. But after it's happened three, four, five, six times after that? It actually isn't cool anymore, because it apparently becomes something that anybody can do in any social circumstance with complete and total control over the bullets in question. By the end of the movie, what was initially special, is dull.

Two bullets smashing into each other in mid-air? Well, that's stupid, but it's stupid *cool*. And the first time it happened, I was all "WOOT!!!" Then, in the course of 10 minutes, it happens an additional three times. And just like that, the edge is off.

There are two or three other stylistic tics that Bekmambetov successfully drains the cool right out of. In "Night Watch," I was impressed by how rarely he repeated himself. In "Wanted," he can't seem to stop. And the speed with which his tricks wear out their welcome is amazing! I mean, It wasn't until half-way through the second "Matrix" movie that I began to doubt the Wachowskis had anything new to offer and two-thirds of the way through before I become offended.

Oh Good God this is long.

Point made, I guess. Or maybe "point stated for the record."

[OK... Last word... Total spoilers here. Vague, but total. The last scene of the movie is what screenwriters would call a "callback" to the first scene of the movie. The problem? The opening scene is set up as one thing and debunked without any alternative explanation being provided. What I'm saying is that it's a callback to the death of a man who's never identified and whose demise doesn't make a lick of different to the movie. It's a callback to NOTHING. I'd also emphasize that, unless I'm misremembering, it's a callback to a method of killing that Wesley shouldn't have had any knowledge of. He wasn't there and the killing method wouldn't have been in his father's records anywhere. And it isn't the first callback to that scene, since the breaking through glass with mosaic effect from the opening scene is also echoed. Again... A callback to NOTHING. That's just bad writing.]