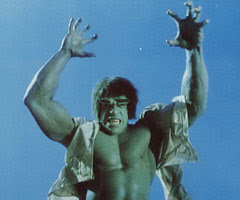 "The Incredible Hulk"
Director: Louis Leterrier
Fien Print Rating (Out of 100): 59
In a Nutshell: Summer movies are supposed to be visceral things, they're supposed to be pleasing and accessible in the least complex way possible. This summer's movies, though, have been all about the management of expectations. You expect "Iron Man" to be another awful comic book movie? You come out overjoyed! You expect "Iron Man" to be the masterpiece a strange cadre of critics have dubbed it? You come out disappointed. You lower your expectations for "Indiana Jones and the Quest for Profit"? It comes out satisfying. You rewatch Spielberg's first two Indy movies and suddenly you're underwhelmed again.

"The Incredible Hulk" is yet another movie where viewer response will be completely conditional based on what they're expecting going in. Did you hate the Ang Lee "Hulk" because it was excessively pretentious and too rich in Freudian undertones? Have you read about star Edward Norton's original plan to distance himself from the final cut? Were you bored and annoyed by the original trailers Universal put out? If you fall into one of those three groups, you're probably going to enjoy "The Incredible Hulk" as the effects laden summer romp it intends to be.

But what if you actually liked the Ang Lee "Hulk"? What if you were in the crowd at New York Comic-Con and saw the rapturous response from fanboys? What if you've read Harry Knowles or Peter Bart's orgasmic reviews? Expect to come away disappointed.

So this'll just be one of those reviews where I try figuring out where I stand and acknowledge that, as always, your results will vary. Follow through after the bump for a full review.

The first thing to note is that, darnit, I dug the Ang Lee "Hulk." Right up until the Hulk versus Giant Electrical Id climax, I actually think it's a pretty great spin on the comic book movie, full of complex ideas and actual motivated characters. I loved Nick Nolte's ridiculously hammy performance and was interested by what Eric Bana brought to the table. Editor Tim Squyres and cinematographer Frederick Elmes brought unexpected technical mastery to the property.

But enough about that. I went into "The Incredible Hulk" expecting a disaster and was pleased to discover that it wasn't a disaster.

I'm not a huge Louis Leterrier fan, but I thought both "Transporter" movies were very acceptable they-are-what-they-are action B-movies and "Unleashed" actually hinted at something more. And it's to Leterrier's credit that the opening act of "The Incredible Hulk" plays as well as it does. Set in an overcrowded residential neighborhood in the Brazilian hills, the opening scenes start off CG-free, but they do a good job of establishing Norton's Bruce Banner in exile, a man trying to learn to control his anger issues, while also trying to learn Portuguese. These scenes represent an excellent and semi-organic use of a location I'm not sure I've seen in this type of movie, more reminiscent of a Bourne-style set piece than anything else. The Brazil sequence ends with the first arrival of The Hulk and, from there, the movie is downhill. Maybe, really, it's even downhill from the opening credits, which do away with a belabored origin story with quick-cutting flair.

That doesn't mean that it stinks, or anything, but is one of those cinematic instances where probably a savvier filmmaker would have been more successful in working around the limitations of his CG. There have been plenty of jokes about how odd it is that the new Hulk appears to be even less convincing than the Ang Lee version five years back. I don't think that's exactly true. The problem is that as decent as the effects are, they're not quite good enough to stand up to intense and prolonged scrutiny, so the less we see of the Hulk, or the more Leterrier uses editing to space out the creature's performance, the better it is. But the more I'm forced to stare at him, the more I wonder at just how little connection there is between the Hulk's face and Norton's, for example. Ang Lee's Hulk looked interestingly like Bana, enough so that we could understand how the one could become the other. Hulk looks like Hulk and Norton looks like Norton. But at least Hulk stays the same size for the entire movie, which will make some geeks happy.

And the movie goes from using Hulk sparingly to the end where Leterrier just becomes the latest director to go down that "Oh well, let's just let the two CG critters battle it out" path. And let me just say that the final battle between CG Hulk and CG Abomination is actually much better than the climax of "Iron Man," if only because it's louder, more chaotic and louder. Seriously, did I mention it's loud? That's pretty much the defining characteristic of that last showdown.

While Norton has publicly taken full credit for the script, it's Zak Penn who gets the sole credit onscreen. He's trimmed most of the subtext that made Lee so very giddy. Lee's take on Banner's repressed anger was all about contemporary masculinity and Oedipal pressures. Penn's is just about a guy who sometimes gets angry in socially destructive ways. It's about as thin a pull as you could possibly imagine. Even the scene of Banner talking to lady-love Betty's (Liv Tyler) new shrink boyfriend (Ty Burrell) has been cut because it was too probing and psychologically relevant. To heck with that.

The only undercurrent in the movie has something to do with the merging of biotech and military entities. William Hurt's General Ross wants to use science to create super-soldiers, but nobody gets dark enough to make any sort of Halliburton/Black Water resonances come into play.

While Norton is a better actor than Bana, his version of Banner isn't as interesting. In fact, I'd have hoped for more from Norton, an actor who has always gravitated toward showy roles that expose the duality of the human condition. He's already had three or four roles where he essentially was playing two different people and it's disappointing that Norton keeps the Hulk entirely out of his interpretation of Banner. Or maybe it's unexpected, like Norton knew we'd expect that sort of ACTING, so he subverts that by retreating entirely inside himself.

William Hurt also proves a mighty internalized Gen. Ross, much less wily than Sam Elliott's Ross in the Lee film, but probably a more believably bad father. I wonder if I could accept William Hurt playing somebody's awesome father. The thing is, I completely believe that Hurt has a "Big Lebowski"-style awesome comic character in him, perhaps as the WASP-y father or father-in-law in a Wes Anderson or Noah Baumbach movie? Just a suggestion?

While I may not have raved about the eventual computer incarnation of The Abomination, Tim Roth's Emil Blonsky is a truly interesting character, decently embodied by Roth who, like Hurt, is pretty much capable of doing this kind of role in his sleep. Although Penn's (or Norton's) script delves only superficially into the effect of this sort of near-infinite power on a meek and scientific man, we get a much more interesting source of how a career soldier like Blonsky might respond.

Might I suggest that Blonsky's character is Barry Bonds-esque? He's basically this brilliant fighting machine who's had to watch his body go through the inevitable attrition, even though his intellectual processes have become more honed. Given the opportunity to put his ever-sharpened mind into the body of a younger and more powerful man thanks to an unproven and probably dangerous procedure, he doesn't hesitate. All Blonsky's ever been is a soldier and faced with the Hulk, who wields unwanted strength with only brute intelligence, he takes the opportunity without hesitation. Roth's diminutive stature only plays into the character, especially when he's standing next to Hurt, a very very very tall man. Roth made such a substantial character out of so little that I lost interest when the man vanished into pixels.

Wait. Does that make Bruce Banner into a Mark McGwire figure? I'm gonna say he's probably Brady Anderson-esque. How's that for a clumsy metaphor? It works! I swear!

Another weird acting note: What's up with Martin Starr appearing in two shots? Was he loitering around the set? And, more interestingly, how did Michael K. Williams end up appearing in exactly one shot, for less than two seconds of screentime? For that dozen "Wire" fans who watch the movie, that'll prove a weird distraction, though if reach for popcorn at the wrong time or blink, you won't even know he was there. Conversely, Stan Lee's extended cameos in Marvel pictures have begun to annoy me. Yes, I know. Stan Lee is a God. Don't think I don't know that. But his appearances get the same knowing chuckle from the same four or five hardcore fans in every movie and they ultimately add nothing. Haven't we reached the point at which we can play around with the nature of Lee's cameos? Hitchcock, after all, had fun with how he was used in movies. Sometimes he'd appear right in the middle of the screen and practically wink at the audience, but other times he'd be in the background and the camera would barely catch him. I'm more tolerant of Lou Ferrigno's much-longer-than-it-needs-to-be cameo, because, well, Lou Ferrigno probably needs the money.

[Spoiler-ish: Universal has made the somewhat explicable, somewhat perplexing decision to play up Robert Downey Jr's appearance as Tony Stark, making it the lead image in the latest trailer. Yes, this helps a movie that needs buzz capitalize on the buzz remaining around the year's biggest hit. It also opens the door for disappointment when viewers discover that Stark has *almost* nothing to do with the movie and the character of Iron Man has even less. If you ask me, Downey's appearance should have been allowed to spread as a little Easter Egg like Sam Jackson's visit at the end of "Iron Man." If you hear something is coming, but you don't know for sure, whatever you get is a treat. If you know for certain that the treat is coming, but it's such a small mouthful that the flavor doesn't even linger, you experience disappointment. Disappointment leads to bad word-of-mouth. The *last* thing a Hulk-based movie needs is bad word of mouth, even if the movie itself isn't so bad at all. So don't expect much Tony Stark. And don't expect *any* of Sam Jackson's Nick Fury, except for a quick name check.]

Or, for an alternative spin on things, my bud Andrew "Call Me Drew" Melbourne has reversed the equation and written a theme song for "Lost" in the flavor [albeit not necessarily rhyme or rhythm] of "Gilligan's Island."]