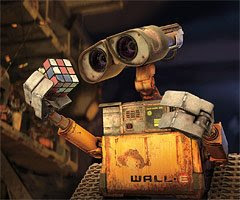 "Wall-E"
Director: Andrew Stanton
Fien Print Rating (Out of 100): 79
In a Nutshell: [After nearly six months of general cinematic disappointment and forcing myself out to see stuff like "Jumper" and "The Happening" just to keep my muscles flexing, I've had a couple really good days for movies. "The Pineapple Express," which I saw on Wednesday, is my favorite comedy of the year to date. And "The Dark Knight" is my favorite film overall. So what did that mean for my impressions of "Wall*E"?]

Two quick reactions from "Wall*E" that I wanna share.

#1: The closing credits -- an AWESOME survey of the history of art -- begin rolling and a kid next to me, probably three or four looks at his parents and says, "That was too long!"

#2: A group of college-ish kids are just gabbing up a storm about how they liked the movie and they're swapping the various visual references they caught -- "Blade Runner," "2001," "Toy Story" -- and how much they liked it. One finally says, "Yeah, but it was slow at the beginning and then it picked up." And his friends agreed.

I'm not necessarily sure I have commentary on either of those reactions. Or if I want to commit to either POV. Nor do I know how typical they're going to be. At 103 minutes, "Wall*E" isn't really a long movie by Pixar standards, but I'm not in any position to explain to a pre-schooler that 103 minutes isn't too long. Nor did I want to sit down and explain to the college students that the first 45 minutes of "Wall*E" were probably the most purely and magically cinematic I've seen at the movies in several years and that when "the pace picks up," that's when the movie becomes bland and conventional, to my mind.

More thoughts after the bump...

For 45 minutes, without an iota of dialogue -- barring an obtrusive, expositional training video featuring a live-action Fred Willard, I mean -- "Wall*E" is a perfect silent movie. Our hero is an expressive walking trash compactor who -- like Mars rovers Spirit and Opportunity -- far outlived his expected shelf life. Accompanied only by a disturbingly cute cockroach, he scuttles amidst the detritus of a human modernity, ineffectually cleaning up the mess the vacated people left of the planet. The Pixar team -- led by director Andrew Stanton -- give Wall*E an entirely original Earth to play around in, one that doesn't mimic any sort of post-apocalyptic wasteland cinema has previously offered. The key of "Wall*E" is that it isn't post-apocalyptic at all. When Earth ceased to be inhabitable, humanity made a half-hearted attempt to clean things up, but mostly abandoned the planet to cleaner-bots.

The real star is Ben Burtt, a legend of sound design. Not only does he sort of give Wall*E his limited voice, but the robot's every move is emotive and the landscape is aurally alive around him. Accompanied by the character's equally expressive eyes and limbs, it's no wonder that by the time Eve, an exploratory probe sent from humanity's interstellar outpost, arrives, audiences are in love with the main character. From there, we're even rooting for him to romance, even though part of us recognizes that what we're rooting for is for Number Five from "Short Circuit" to have sex with a flying iPod.

One of the essential tropes of silent comedy is a wonderment with new technology. In the works of Chaplin and Keaton and Lloyd, plots were frequently generated by the new gizmo of the moment, be it the car, the automated assembly line or, in several cases, the movie camera. Decades later, Jacques Tati would mine similar territory, as the writer-director-star's mostly wordless main characters would engage with the modern world as if it were something entirely unfamiliar. So many of those vintage silent or near-silent films can be boiled down to the theme: In a new world, there's always room for an old-fashioned man, while certain virtues -- that'd be "love," mostly -- never go out of style.

I really dig the alternative spin that "Wall*E" puts on that formula. Our hero lives in a bizarre world where it's been the technological present for nearly 700 years, where no advancements have been made at all, because nobody's been around to make them. With that stagnation in place, Wall*E's fascination isn't with the technology of the 21st or 22nd Century, whatever the peak of human engineering happened to be. He's nostalgic for a time before he existed. He looks at his peers as spare parts for when he has a malfunction, but he marvels at older equipment. If a Lloyd or Chaplin would find himself done in by something sleek and new, Wall*E is flummoxed by sporks and Rubix Cubes. He listens to old music and classical musicals and when he watches "Hello Dolly!" it's on a VHS cassette. Wall*E isn't exactly a Luddite, but he has a retro-appreciation. And he -- like Chaplin, Lloyd and Keaton -- is a romantic.

I think it all has to do with two different versions of filmic storytelling separated by 80 or 90 years and conveying a similar message: The silent film greats used the developing medium of cinema to say, "Look, no matter how advanced things get, the core virtues of storytelling and romance aren't suddenly going to change." It's a view of the world that's both progressive and yet conservative. The Pixar ethos has always been the same. It says, "Yes, we're using computers and we're making animation look more and more like real life, but don't be freaked out! We aren't abandoning character and heart in the process."

That may be the most intelligent thing I have to say about the movie, so you may wanna quit now.

Anyway, on Earth "Wall*E" has a charm and a sweetness that's entirely irresistible. Up in space, on the massive Axiom spaceship, "Wall*E" loses some of its charm. Suddenly, "Wall*E" is often a supporting character in his own story, as the Pixar team can't resist the need to introduce humans and conversation into the story. The people, having been raised for many generations in zero-gravity, are fat blobs who travel on hover-chairs and eschew their actual surroundings for virtual reality.

As I think about it, Wall*E's lack of interest in the humans is interesting. As I said before, he loves him some "Hello Dolly!" but when he gets aboard the axiom, he makes no connection between the floating tubs of jelly he meets and the dancing, singing stars of his favorite movie. Why doesn't he? Why does the story not refocus around Wall*E helping humanity rediscover its musical energy? I wonder.

The political message in "Wall*E" is simultaneously laid on thick and unconvincing. Yes, it's about rolling up your sleeves and doing your part to clean up the world, but is it REALLY? Wall*E cleans up the world because that's what he's programmed to do and he picked up the green seedling because it's something different that he's never seen before. It's both simple and primal and it has nothing to do with what's right or wrong, ethically, so I highly doubt that children are going to come away having gotten that as a message. And there's absolutely zero chance that they will internalize the message about rampant consumerism and waste. As they put on their Wall*E shirts and eat their Wall*E snacks from their Wall*E lunchboxes, what are the odds that they'll pick up on a message about how it's wrong to bow to every trend pushed on you by marketers? I'm much more certain that "Ratatouille" will spawn a generation of wee foodies than that "Wall*E" is going to yield millions of little independent-minded Green Party voters.

My complaints about "Wall*E" are quibbles. They're the reason I only really, really liked it, rather than necessarily loving it. "Wall*E" does nothing to tarnish the Pixar image, nor to make one wonder what it is that Pixar is doing that no other animation company seems to understand. And it isn't just the storytelling, which has always been Pixar's trump card. Surely by this point some other company should have poached enough Pixar animators or hired enough art school hot shots to catch up on an artistic level, but "Wall*E" is in a different aesthetic league from "Kung Fu Panda," for example. And it's not a small gulf.

On to the next movie!