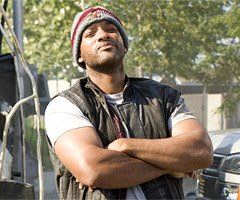 "Hancock"
Director: Peter Berg
Fien Print Rating (Out of 100): 62
In a Nutshell: [I've got a problem here. I just saw "The Dark Knight" last night and it's superior enough that I feel uninspired in my attempts to justify the things I liked about the sloppy, mal-edited mess that is "Hancock." But it's too soon to review "The Dark Knight" (it's gonna top 80 on the silly and arbitrary Fien Print ratings scale), so I've gotta do what I've gotta do. Let's say I liked "Hancock" in the moment, but it hasn't gotten better.]

So you hear about a cool new concept for a comic book and you rush out and buy the first issue. You're intrigued by the premise and the set-up, but then you realize that you're a 31-year-old man and 31-year-old men don't buy comic books. Several months later, you decide that it's completely acceptable for a 31-year-old man to buy comic books and you try to catch up on the comic book series you enjoyed so much, but you missed two issues and the store only has the fourth issue, the conclusion of the first story arc. Well, it started well and ended well. You can't help but feel like you'd have understood it more if you'd read the two middle issues. But whatever.

That never happens to me. I only read comics after some friend or another tells me I'm supposed to and I only read trade paperbacks, so the arcs are all together, nicely bound start-to-finish.

But I can imagine what it would feel like.

And I imagine it would feel an awful lot like "Hancock."

Going back to the comic book analogy, I may need to add some modifications. I'm also now going to need you to imagine that between the first issue and the fourth, there were a number of creative changes, some big and some little. Maybe just the inker changed. But maybe a new artist came on board and suddenly the characters started looking completely different. And finally, by the end, there was a new writer and artist and inker and everything. And through it all, you keep saying, "Yeah, but there are things I'm liking here..."

[This review contains a lot of rambling but, as I glance over it, almost no spoilers at all.]

The story of the pre-production on "Hancock" (formerly titled "Tonight, He Comes") is the stuff of industry legend. There was a script by Vincent Ngo. Over the course of a decade, it was rewritten by Vince Gilligan and polished by everyone from John August to Akiva Goldsman as one director (Jonathan Mostow) after another (Michael Mann) circles and chimed in on the project before it was finally helmed by Peter Berg. There was reportedly a longer, R-rated take on the movie that was tested and discarded because if you've got a Will Smith movie and it's coming out at the 4th of July, it has to be short and it can't be R-rated.

So "Hancock" will hit theaters at 92 minutes and PG-13 and I don't think either one of those things was a good idea for the creative integrity of the movie. But if "Hancock" makes $150 million over the long 4th of July weekend, I doubt anybody is going to be crying about soiled creative integrity.

At its core -- whoever was responsible for that core, I can't speculate -- "Hancock" has a really good premise. Smith plays Hancock, a misanthropic alcoholic superhero with anger-management issues and deep insecurities. Because he hates himself, he can't help but screw up his attempts at altruism. In order to become a true and beloved superhero, he has to learn to love himself. Enter an kind-hearted PR man (an oxymoron never really explained, but well-played by Jason Bateman), who understands that strategies to improve Hancock's image.

Comic fans won't necessarily think this premise is all that fresh. The funny books are full of reluctant superheroes, full of aspiring do-gooders who are treated as freaks by a general population incapable of dealing with anybody outside of the norm. That is, in fact, one of the major themes of "The Dark Knight."

Smith has no objections to playing Hancock as initially unsympathetic. It's almost impossible not to like Smith as an actor because he doesn't play by that Brad Pitt "I might look like I'm a movie star, but I'm really a character actor" rule where every other performance has to have funny hair or a weird accent. And he also isn't like Tom Hanks in that way that Tom Hanks went from frothy comic actor to Multiple Oscar Winner Tom Hanks by pounding his way through a series of aggressively award-baiting movies until we figured out that he was SERIOUS. Smith is happy to be a star and he's happy to give audiences exactly what they want out of him, but in the corner of his better performances, you sense that he's pushing himself. "I Am Legend" was a Will Smith action movie with zombie-vampire-CG-albinos, but my favorite scenes where the ones where he conveyed the stir-crazy confusion of a man without social contact for 1000 days. He wasn't over-the-top nutty. But he was still nutty.

I feel the same way about his performance here, where he initially plays Hancock's unkempt side for laughs, but actually performs things much more subtly as we see Hancock beginning to care and beginning to believe in himself. The movie gets darker as it progresses and Smith gets better, albeit less funny. I don't doubt, though, that audiences are going to prefer the funny, lewd Hancock to the more emotional material. And I don't doubt that the studio pushed the final cut in a direction that emphasized Will Smith cracking wise.

I think there were probably drafts of the "Hancock" script that made it into a full-fledged deconstruction of the comic book genre, taking apart the expectations society places on its heroes and finding the tragic-comic value in a man with the ability to save the world, but not the inclination. Instead, the movie verges on being a parody or satire on the genre, which makes it a broader, less intelligent and less satisfying thing. The closer the movie goes to broad, crowd-pleasing comedy the worse it gets. Hancock threatening to insert one character's head into another character's ass? Vaguely funny. Hancock actually doing the deed? Much less funny, even with the soundtrack from "Sanford and Son" inexplicably playing in the background.

I'd bet those moments will have audiences hooting and whooping in the aisles -- heck, there were even applause at the press screening -- but they make it harder to take anything that comes afterward seriously. And "Hancock" requires you to take it seriously, since the last act takes at least a stab at explaining the movie's overall mythology. But the reveals about Hancock's true identity feel truncated and ill-formed. They suddenly require that you accept the gravity of the characters and their situation, a gravity that's been downplayed by every previous editing decision.

But they kinda had to play up the broad comedy, since the final movie lacks in several things that usually push narratives forward. There's no love story. There's no single threatening villain (though I bet there was a version of the script, film worthy of the talents of Eddie Marsan as the semi-baddie). I believe on your basic Dramatic Conflict flow chart, "Hancock" goes down as "Man versus Self," which isn't a very popcorn movie notion, so it's been downplayed in the final cut.

While I get the feeling that the studio bulldozed Berg in the editing room, he was a fortuitous choice for the movie, as a director who's proven capable with comedy, drama and action, occasionally blending several genre elements in the same film. I think Berg's versatility is the reason why nearly every individual scene of "Hancock" plays pretty well in isolation. The funny parts *do* get laughs. The action parts *are* exciting. And thanks largely to Smith, Bateman and Charlize Theron, I can't say that I didn't care about the characters, at least bit.

Aesthetically, Berg has Michael Mann's jittery intimacy down pat -- everything's in close-up and everything's hand-held. The thing he doesn't have is the thing that -- occasionally at least -- elevates Mann, which is a compositional confidence that helps pull everything together and sell the movies as a whole.

In the end, I'm a lot split on "Hancock." I enjoyed the movie in the moment, couldn't refute a single claim from colleagues about its failings and then felt the desire to stick up for the poor little guy after both industry trade papers rushed out with harsh pans.

I can't defend "Hancock" as an overall picture. It wants to be many things, but doesn't quite succeed at being any of them. I *think* it wants to say things about the nature of heroism and altruism in the 21st Century, but ultimately it kinda doesn't.

Seeing "Hancock" on Monday, I already knew I was seeing "The Dark Knight" on Thursday. It was a light snack before the big meal. There's no reason why it shouldn't be the same for general moviegoers. And maybe the best argument I can make for seeing the film is that perhaps if it's a huge success, that will allow Berg to release a 110 minute, unrated director's cut. That's the cut I want to see.

[I also wanna add that this is one of those instances where I'm pretty sure my score for the movie is too high. My point? "Hancock" isn't as bad as some people are saying it is. Nothing more...]