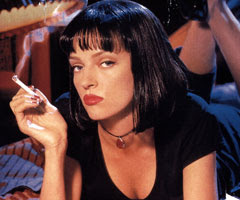 Another day, another list. Actually, another day another 30 or 40 lists, courtesy of the desperate-to-stay-in-business folks at Entertainment Weekly.

In this week's issue, the magazine lists 1000 random things. It's a good way to get page-views on the website and to stir up debate on the Internet. And, like every other good lap-dog, I'll take the bait. Mmmm... Bait... WORMY.

Before we go any further, here is the list of EW's 100 New Classics, or "the 100 best films from 1983 to 2008." It actually has 102 moves on it, because despite having 100 potential positions, the cowards at EW still insisted on lumping the entire "Lord of the Rings" trilogy into one movie. They didn't do the same for "Spider-Man" or the "Bourne" movies. Weenies. But that sort of refusal to make an actual choice is part of why the list stinks anyway.

One of my favorite expressions is "neither fish nor fowl" and the EW Top 100 list is neither fish nor fowl. It is, indeed, so nebulous and bland a list as to actually defeat its very purpose. Yes, EW wants the list to stir up discussion, but it's such a meaningless assemblage of movie names that there's almost no cause to argue. I don't get the impression the EW editorial staff knew what they were listing, so how can one reasonably say their list is wrong?

Look smack dab in the middle to see the split personality at work. At No. 46, you find "Children of Men," a movie that perhaps deserves higher placement on cinematic merit, but didn't necessarily impact the popular culture. Two places later, though, you find Brian DePalma's "Scarface," an atrocious movie on qualitative levels, but a piece of obvious lasting influence, particularly in the hip-hip community. And then, smack in the middle at No. 47, you get "Men in Black," a movie of negligible cinematic merit -- after a fun beginning it snoozes for nearly an hour -- no cultural impact and no meaningful place at all in the cinematic landscape. "Men in Black" -- a bit like "Beverly Hills Cop," which inexplicably sits at No. 61, 10 spots ahead of "Unforgiven" -- is nothing more than a successful popcorn movie. But there it is between the masterful ("Children of Men") and the influential ("Scarface") making you wonder what the standard of measurement was that brought them together.

The list is populist and inoffensive in the way you'd expect an Entertainment Weekly list to be and, as a result, it ends up making saying nothing. Why do a list like this at all if you're going to pussy out at the end.

The top movie of the last 25 years? "Pulp Fiction." Yawn. Leaving aside that in my book, "Pulp Fiction" goes behind both "Reservoir Dogs" and "Jackie Brown" (both excluded here) in Quentin Tarantino's body of work. But magazines have been calling "Pulp Fiction" the best film of the year, the decade, the century since the week after it opened. It's a movie that has been recognized and honored and celebrated to the point that recognizing it and honoring it and celebrating it accomplished nothing other than a reaction of, "Well duh." It produces exactly the sort of indifference that compilers of a list like this *ought* to want to avoid.

If you're making a list like this, you want to go out on a ledge and thumb your nose at the world as you declare...

"The Best Movie of the Past 25 Years Is 'Do the Right Thing.'" Then you can write a feature on how Spike Lee's critique of race relations in America is every bit as relevant today as 19 years ago, particularly as an African-American man is in a race for the White House. You talk about the integration of rap into mainstream cinema and the use of the commercial and music video aesthetic in Spike Lee's work. Some people disagree, but darnit... You said it.

"The Best Movie of the Past 25 Years Is 'Three Kings.'" Then you can write a feature on how David O. Russell's movie is the smartest film about the first Iraq war and how it's an even smarter critique of our current failings in the Middle East. Then you say how even if you ignore the politics, it's still a smart, funny action movie and those don't get made nearly enough.

"The Best Movie of the Past 25 Years Is 'Toy Story.'" I can't defend this one, but EW has it in the Top 5. So stand by it. Put your name on the DVD box. Own the position.

Entertainment Weekly can't own the position of calling "Pulp Fiction" the best movie of the past 25 years. It's a subjective decision and they've been scooped on it 1000 times over. They're just another voice in the chorus and if that makes the EW editorial staff happy, good for them. They listed 100 movies and said nothing.

But again... the terminology is meaningless.

By my count, the list includes exactly five films in a language that isn't English. Better they should have made this a list of just the 100 best English language films of the past 25 years, because otherwise the editorial staff of EW is saying that in the past 25 years, no French or Italian or Japanese or Indian or Finnish or Russian filmmaker has made a SINGLE movie the equal of "Napoleon Dynamite." Is that really what this magazine wants to say? And the token foreign language choices are a bit silly anyway. If you're working with a 25 year period and you have one Pedro Almodovar movie to pick and you only choose the sanitized simplicity of "All About My Mother," that's a sign that you didn't really like Pedro Almodovar anyway.

And, by my count, the list includes exactly two nonfiction films. I won't get into putting "Crumb" higher on the list than "Hoop Dreams," though "Hoop Dreams" would have made my Top 10. But maybe they should have called the list the "100 best narrative, English-language films of the past 25 years." Because otherwise you're saying that Errol Morris hasn't made a movie better than "Napoleon Dynamite" in 25 years. Given the mainstream sensibilities at EW, I'm amazed that there isn't a token Michael Moore movie on the list, much less "An Inconvenient Truth" or "March of the Penguins." But I guess that if you're making room for "Austin Powers: International Man of Mystery," it's hard to open things up for another couple documentaries. But since the list isn't called "100 movies that made us giggle and that were turned into popular t-shirts," I guess I expect more.

I'm amazed by the number of genuinely important or influential filmmakers who somehow didn't make the cute. So we include "Napoleon Dynamite" but not "Clerks" or "Chasing Amy"? You can't slip in something by Jim Jarmusch? No "Sweet Hereafter" or "Exotica" for Atom Egoyan? And no nod to David Cronenberg by putting "The Fly" at No. 100? No room for Michael Mann? And unless this has suddenly become 1996 all over again, putting "Natural Born Killers" as Oliver Stone's lone slot can't really be justified.

Since I can and would happily make the argument that "Three Kings" could have topped a list of this kind, I'm disappointed that it isn't actually here at all. And "Groundhog Day" should have been in the Top 20. If "Casino Royale," a solid action movie that runs at least 35 minutes too long, belongs there...

Strange. I think they're better movies than "Napoleon Dynamite."

25 other movies I might have included on the list: "Babe," "Quiz Show," "Pan's Labyrinth," "Election," "Before Sunset," "Hard-Boiled," "Shawshank Redemption," "The Usual Suspects," "Gremlins," "Something Wild," "Midnight Run," "The Untouchables," "True Romance," "The Return of the Jedi," "Indiana Jones and the Temple of Doom," "A.I.: Artificial Intelligence," "Se7en," "Almost Famous," "City of Lost Children," "Bullets Over Broadway," "Big Night," "The Ice Storm," "Election" and "Wonder Boys."

I wrote that list in roughly a minute without giving any real thought. None of them are snotty, intellectual films. They'd all fit with the EW populist brand. They're just better movies than "Beverly Hills Cop." With your usual AFI list, I'd say I might want to replace 15 or 20 choices with my own favorites. With this EW list, I'd ditch half of the choices and start again.

I could also play all sorts of other games replacing and swapping films by various directors, but if those are the Paul Thomas Anderson or Coen Brothers movies EW wants, it's their list. If they think putting "Napoleon Dynamite" on a list like this makes them seem "cool" or "edgy" or "hip," I hope they gave a good long look at "My Big Fat Greek Wedding."