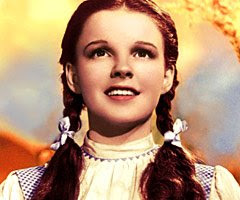 It's a pretty pointless thing that movie bloggers do whenever the AFI launches its latest Top 100 list. We rant and rave as if any Top 100 list other than our own would have satisfied us. And, if I'm being honest, I probably wouldn't like my own Top 100 list very much either, depending on what side of the bed I happened to wake up on.

Thankfully, the AFI's new list-o-rama is typically contestable, as its broken things down to 10 individual Top 10 lists in a variety of genres. One could certainly get plenty irked by the choice of genres, but they categorization within each genre and then by the actual selections. Then there are all of the usual AFI problems about lamentably absent older films, lamentably absent recent films and the weird definitions of what constitutes an "American" film anyway.

Some of the genres I'm maybe 80% or 90% happy with. Then there are the two genres in which my favorite films didn't even make the Top 10. And then there's the genre that never should have been included at all.

I've already copied down each of the Top 10 lists for my straight-forward Zap2it news story, so I'm not going to do that again here. But after the bump, I'll do a quick assortment of complaints for each genre. It's what I do.

Animation: I'm just going to say it: "Snow White" is overrated. Wildly. It's a movie with maybe two or three memorable sequences elevated by its "FIRST!!!!" status. But the AFI voters have always thumbed their noses at plenty of other "FIRST!!!" movies, things like "Birth of a Nation." I guess I'm fine with "Snow White" making the Top 10 in general, but it's in the top spot by default. Then again, I'm problematic because I happen to truly believe that "Dumbo" is the true and unrecognized peak of Disney animation and it would have received my top vote. I'd have given my top Pixar slot to "The Incredibles," which also didn't make the list. Plus I'm part of the group that figures "Toy Story 2" is a better movie than the first "Toy Story." So sue me. Would I have pulled "Shrek" and "The Lion King" to make room for "Iron Giant" and maybe "An American Tail"? Very possibly.

Romantic Comedy: The best romantic comedy ever made, if you ask me, is Billy Wilder's "The Apartment." It's not here so that AFI voters could vote for freakin' "Sleepless in Seattle." To my mind, that's inexcusable. I'd also advocate extremely strongly for "Bringing Up Baby," for something Rock Hudson/Doris Day-y ("Pillow Talk"?) and for "Say Anything." There also has to be something better than "Roman Holiday" out there, y'all. There has to be. But AFI voters love that dinky movie. I'm trying to think of other viable alternatives to "Sleepless in Seattle." Something with Julia Roberts, maybe? "Notting Hill"? Is "Sherlock Jr" a romantic comedy? I think it probably is and an addition silent film would help the list.

Western: This is perhaps my favorite of the AFI categories just because I have no problems keeping #s 1-9. I might do a little shuffling here or there, but I'm OK with them. "Cat Ballou" is just silly here. That does, however, leave just one position to be filled by something like "Rio Bravo," "The Man Who Shot Liberty Valance," "The Outlaw Josey Wales," "My Darling Clementine" or even "The Last Picture Show," which was categorized here by the AFI. Then you get into issues of why, exactly, "The Third Man" or "Lawrence of Arabia" are fair game and "The Good, The Bad and the Ugly" isn't. I'd pick "Liberty Valance" for my #10 slot.

Sports: I know that it makes people like Billy Crystal get weak in the knees as the weep over their childhood Bronx memories, but "The Pride of the Yankees" is a bad movie. Not a so-so movie or a mediocre movie. It's BAD. Everything else in that Top 10 is lessened because of it, which is too bad, because eight of the 10 (assuming you happen to agree that "Jerry Maguire" is a sports movie) are perfectly satisfying. I'd pull "Yankees" and "National Velvet." That would then give me room for "Slapshot" or "Karate Kid" or "The Natural" or "Tin Cup" or "Miracle" or "The Rookie" or "Friday Night Lights" or, if we need an older movie, Harold Lloyd's "The Freshman."

Mystery: Even if I disagree with some of the ordering and some of the selections, this is a good list of 10 movies. VERY good. I'd put "Chinatown" over "Vertigo," but I won't hate you if you prefer the Hitchcock. I would also move "The Third Man" up to three and "North by Northwest" to four. I wouldn't cry over losing "Laura" entirely, nor "The Usual Suspects," though I really appreciate both movies. I'd also question how, exactly, "Blue Velvet" comes to be a mystery. But I'll leave it there. But you have to get the Coen Brothers onto one of these lists somewhere and Mystery would be the right home for "Blood Simple" or "Fargo" or even "The Big Lebowski." I also wouldn't quibble with something out of left field here, like Brian DePalma's "Blow Out." This could also be the home for something like "L.A. Confidential." Is "Touch of Evil" a mystery? It ought to be. Oooh and since "Citizen Kane" didn't make the cut anywhere else, how about putting it up here?

Fantasy: I really can't deal with the weird assortment of movies in this category. I have no way of comparing "Groundhog Day" to "King Kong" to "Miracle on 34th Street" to "Lord of the Rings." And I don't know how the voters did either. Perhaps this was the category, though, where a superhero movie could have made the cut? The Donner "Superman" maybe? Is this where "Babe" should have been? If so, that's Top 5 for me. Based on the other films that appeared to be on the ballot, I could have found room for one or two out of "Who Framed Roger Rabbit?," "Purple Rose of Cairo" and maybe "Brazil."

Sci-Fi: Look, I just don't like "2001." Sorry. It maybe comes in at No. 10 on my ballot as a nod to convention. In fact? Pull it entirely. And pull "The Day the Earth Stood Still," which isn't a bad movie but still... I'd also replace the original "Invasion of the Body Snatchers" with the '70s Phillip Kaufman version, but that's just me. I'd also pull "A New Hope" with "Empire Strikes Back." But given two fresh spots, what would I add? The David Cronenberg version of "The Fly," for sure. Since the ballot included "The Invisible Man" and the list needs a bit more seasoning, I'd add that too. But I'd accept arguments for "The Matrix," Planet of the Apes" and, in particular, "Children of Men."

Gangster: I put "Godfather II" over "Godfather I" every time, but so it goes. The real abomination here, obviously, is the Pacino "Scarface," which goes far below "The Untouchables" on my list of 1980s DePalma gangster movies. That's gone from my list. I'm also not a huge fan of "The Public Enemy." And I'd put "Reservoir Dogs" in ahead of "Pulp Fiction." So again, that leaves me with two new spaces to fill. The first slot goes to "Miller's Crossing" and the second to "Touch of Evil," which was categorized here by the AFI. Strangely, the AFI also had "Some Like It Hot" in the Gangster genre. So be it. It still doesn't make my list.

Courtroom Drama: Why was *this* the genre AFI decided to do? Why not war movies? Prison movies? Movies about movies? Or so many others... Because this is a totally mediocre Top 10, compiled mostly of serviceable and boxy filmed plays with minimal cinematic merit. "In Cold Blood" may actually be the best of the flat lot and, if memory serves, it doesn't spend much time in the courtroom at all. But when you're stuck with "Kramer vs. Kramer" at No. 3, you've just got to go back to the drawing board. And the choices people didn't vote for weren't much better. This is just dismal.

Epic: First off, y'all, enough with the revisionist hatin' on "Gone With the Wind." If the category is "epic," it comes in right behind "Lawrence of Arabia" in my book. I don't think either of the Heston movies are good enough to deserve a place on this list and I don't think either of the Spielberg movies are really "epics" per se. The standard appears to have been "Long movies set in the past." Of the movies on the ballot that didn't make the cut, I'd have voted for "Apocalypse Now" and anything affiliated with David Lean, which means "The Bridge on the River Kwai" and "Doctor Zhivago."