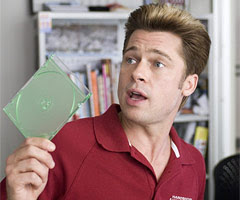 "Burn After Reading"
Director: The Brothers Coen
Fien Print Rating (Out of 100): 68
In a Nutshell: Next year will mark the 25th anniversary of "Blood Simple." The Brothers Coen will have been making movies for 25 years. They didn't used to be prolific, but they're started turning out movies with increasing speed. Two movies in the '80s. Five movies in the '90s. They're already at six (plus a segment of "Paris, je t'aime") this decade.

But it's interesting. I have no idea what Joel and Ethan Coen think about ANYTHING. I don't know their politics. I don't know much of their spiritual ideology. Oh, I know what intrigues them and what makes them laugh. I know their cinematic influences and their formal amusements. But I wonder how many filmmakers of their stature have worked for so long and managed to give up so little of themselves.

Well, the general critical consensus has been to criticize "Burn After Reading" for being a trifle, a substance-free follow-up to what may be The Brothers' finest film, last year's "No Country For Old Men." That's a big odd to me, because I can launch a fairly coherent argument stating that "Burn After Reading" is the Coens' most political and dogmatic film to date. I have more trouble making an argument that it's as funny as they seem to think it is.

That argument follows after the bump.


The Coen Brothers have never played by the rules that critics wanted when it comes to scale. They've won Oscars for "Fargo" and "No Country For Old Men," movies that arguably had lower aesthetic aspirations than, say, "O Brother Where Art Thou," "Barton Fink" and "The Hudsucker Proxy" and probably had lesser intellectual aspirations than "Miller's Crossing." They've never felt beholder to follow up movies in the ways critics wanted either, hence the confusion over "The Big Lebowski," which seemed like a trifle after "Fargo," but wasn't properly credited as a brilliantly daffy trifle. So when "No Country" rescued the Coens from the near-irrelevance of 2004's "The Ladykillers," the tendency was to assume that having reached the mountain top, the Coens were going to keep gunning for Oscars at every turn.

So yeah, I guess "Burn After Reading" seems a bit silly.

Let me recontextualize it for you.

Last night, I watched "Rendition." Before "Burn After Reading," I saw trailers for "Body of Lies" and "The International" ("OH NO, THE WORLD BANK IS GONNA KILL ME!!!!"). So "Rendition" and "Body of Lies" and "The International" are three movies about our post-9/11 New World Order, about globalism, intelligence gathering and about retaining footing in the modern world.

Those are the things that "Burn After Reading" is about as well, but in a very different way.

The world of "Burn After Reading" is a world in which any absurd and paranoid overreaction can be justified and in which we accept subpar intelligence gathering as a matter of course. It's a world in which we know we have enemies and we know our secrets would have meaning to *somebody* but we don't know who those enemies are, how to find them or how to stop them. In a world in which all too often, those keeping watch over us are able to be relieved at a disaster that averted itself, rather than taking an active hand in avoiding the disaster.

Put a different way, it's a movie about the challenges of intelligence gathering in a world where there's very little intelligence to be found.

"No Country For Old Men" found its heart in Tommy Lee Jones' character, a venerable sheriff unclear how to be good in a world where evil was capable of thriving unchecked. His essential resignation was the movie's powerful tragedy, though his resignation to devote himself to staying alive for his wife was a sign of hope.

The main characters in "Burn After Reading" face a similar confusion. John Malkovich and George Clooney play men who aren't exactly sure what their purposes are in the modern world. So they drink. So they philander. So they neglect their wives. So they putter in their basements, plotting either memoirs or an intricate homemade invention that I wouldn't day spoil. They're like Tommy Lee Jones in "No Country" only utterly useless, which makes them the perfect pairing for characters played by Brad Pitt and Frances McDormand, employees at a gym geared towards personal transformation who aspire to transform their own lives. Their understanding of espionage and blackmail and the intrigue of political thrillers is rooted in a few movies they may have seen a decade earlier, back when Malkovitch and Clooney's characters may have been relevant.

So it's easy to find a logic through which one might believe that Joel and Ethan Coen are poking fun at the CIA and FBI under the Bush Doctrine, even as they're also simply sending up spy movies in general.

Oh and it's yet another Coen Brothers movie about dilettantes in over their heads, zany characters who find themselves in a movie that doesn't match their instinctive personal genres.

See? There. To hell with the critics trying to say that "Burn After Reading" is a film that lacks substance and intellect, that it's a brainless afterthought.

Kinda had to bend over backwards to do it, but that's what this is all about.

But honestly, I was thinking my way through the movie's theme during the moments where I wasn't laughing nearly as much as I wanted to be.

Most of the things I found funny were familiar.

The Coens and Clooney have had a successful partnership, but there may be a certain dead-end quality to it at this point. I watched Clooney's fixation with floors and jogging in this movie and could only link those not-quite-relevant quirks to his love of teeth in "Intolerable Cruelty" and his hair in "O Brother." There's a sadness and purposelessness to Clooney's Harry Pfarrer that gives the character some gravity. He's not sympathetic or fully human, but none of the people in "Burn After Reading" really are. [That doesn't bother me, by the way. I've never been a "I need sympathetic characters" guy.]

Malkovich is in hyper "Being John Malkovich" mode, in which just about every word he utters is at least slightly funny, particularly when he gets to swear. I think Malkovich's character probably could have sustained an interesting movie. Ditto with Clooney's. In fact, the movie is a collection of character that I liked spending time with, but never got to know like I wanted to.

Pitt is always a hoot when he plays characters with a reduced number of brain-cells, as in "True Romance" or "Johnny Suede" or even, to some degree, "The Mexican." It's a performance of funny mannerisms and off-beat line readings, but it's still less affected than McDormand's, which may have been allowed to go just a notch or two too far, at least in the scenes where she's paired with Richard Jenkins, who is excellent, but muted.

And by the end of the movie, was I supposed to forget that Tilda Swinton was even around? Now for me, with my oft-professed dislike for Tilda Swinton, that wasn't necessarily a bad thing, but she was the major character who's rendered irrelevant by the end.

Anyway, my favorite scenes were the ones between David Rasche and J.K. Simmons, particularly the tonally flawless conclusion.

Have the Coens had a falling out with Steve Buscemi and Jon Polito? Just wondering. I miss them.

Since the aspiration of "Burn After Reading" was a mixture of banality and zaniness, maybe I just didn't think the mix was exactly right? Maybe at 96 minutes, it was just too brief to build to a crescendo? Or maybe I did need some stakes to make the payoffs funnier? Maybe that's why I laugh more at "Fargo" than I did at "Burn After Reading"? Or maybe I just didn't want the laugh-lines pushed on me as hard as "Burn" does in certain points?

Anyway, I'll keep thinking about this one, I guess. And maybe it'll work its way a bit more into my heart after watching it again on DVD? Dunno. It goes in the "liked it, wanted to like it more" category.

Now, I think I'm going to choose between new episodes of "Dexter" and old episodes of "Sports Night" for my Sunday TV viewing.