I started thinking about this last week when the shoddy makeup work on "One Tree Hill" made me get far more chuckles out of the sight of an abused woman than I normally would. It came up again during Tuesday (Sept. 16) night's "90210," when I fell into a giggle-loop watching Dixon and Silver drive through some of the worst-matched green screen shots of Beverly Hills I've ever seen. I was six when I saw "Return of the Jedi" and I remember the poorly lit outline around the Sarlacc, effects work so bad that it even confused Young Dan. That was still better than Dixon and Silver sitting in a stunt car. I'm not saying I wouldn't have noticed in low-def, but it might have hurt me less...

Follow through after the bump for some thoughts on the second episodes of "Fringe" and "Privileged," plus the third episode of "9021-Ohmigod Eat a Sandwich."


I guess some spoilers will follow. They inevitably do.

"Fringe": Sepinwall has done a good job covering my biggest problem with the second episode, namely the clunky restating of all of the facts in evidence from the pilot. I mean, you take a 90-minute pilot to establish the premise. That's a lot. Why then spend the first 5 minutes of the episode having several characters remind us who the other characters are, plus actual flashbacks. And then you have poor Joshua Jackson, whose character is so unnecessary to the action that half of his dialogue is only there to justify his existence. Every week we're going to discover a few additional random pieces of information he gleaned during his less-than-successful career as a rebellious untutored genius.

They're required to infiltrate an organization of mimes?

"My limited stint at NYU Theater School did teach me something."

"My limited stint at Biola did teach me something."

They have to design a new comfortable lab space?

"My limited stint at RISD did teach me something."

I'm not saying this is going to annoy me at some point. But it will.

Also, I know they're on different networks, but I would love to see an episode in which Walter Bishop (from "Fringe") and Charlie Crews (from "Life") sit around and eat fruit, marvel at modern technology and accidentally solve a crime at the end. That'd be quirky fun!

As a procedural, the second episode of "Fringe" was proficient. It was a little creepy, a little weird and by around 45 minute mark, I'd forgotten what the main case was and I ceased to care how it was solved. But that even happens to me on "House."

The less encouraging part was that the second episode did nothing to warm me to any of the main characters.

If it's possible, Anna Torv's American accent was worse in the second episode and the character has been given so little personality that even a far more experienced and familiar actress wouldn't make it work. I do think that she's pretty and occasionally conveys intelligence in a winning way, but she's falling short due to the writing more than anything.

Jackson's character is, as I've said, superfluous. He's there to allow for the "X-Files"-esque romantic tension -- currently lacking -- but the comparison does "Fringe" no favors. If the show were just a young female FBI agent trying to work with an insane older genius, that might be vaguely original. Then she could just have an occasional flirtation with Kirk Acevedo's character, who's almost certain to be killed off by midseason.

The show also has an odd lack of respect for the intellect of the viewers. The scene that most irked me saw Walter opening the old garage where he was storing his car. First he said the combination out loud, which was a bit silly, but it's been made clear that he can't tell the difference between his external voice and his internal voice. But then we had to have Pacey explain to us that the combination was the first six digits of pi.

I iz not az dumb az they thinkz I iz.

"Fringe" got the requisite boost from "House" and now looks ready to, at the very least, last a season. And I guess I'll keep watching, but they'd better do something cool soon. Oh, who am I kidding. I'll just watch to see people scooping out eyeballs from a corpse. 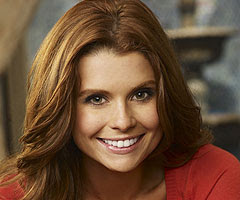 "Privileged": As with "Fringe" in the premise-restating department, "Privileged" is probably going to have to set aside two minutes each week for Joanna Garcia's Megan to explain why it is that, despite her Yale degree, she's working as the least effective tutor in the world.

Perhaps, as I just observed to my Zap2it colleague Rick, "Exposition is the new Action."

To which he observed, regarding the first episode of NBC's new-ish "Knight Rider," "In that case then, this is one Action-packed show."

I still thought the second episode was clever enough, though Rina Mimoun's pop culture lexicon is odd, unless you figure most 24-year-old girls are prone to "Laverne and Shirley" and Sister Sledge references.

Garcia is still amazingly appealing and I'm liking the Danica McKellar vibe that Lucy Hale is giving off. It's Winnie Cooper, without the love for math. I also swear that I saw Michael Cassidy display a little personality in one scene. However, when I went back to my notes, I couldn't figure out where.

Last thing: One of the brats referred to Megan with "It's like watching Mary Poppins on crystal meth."

Kids, crystal meth has become too easy a punchline. It's time to step back and think of which drugs are funny and which drugs apparently lead to you either get AIDS or becoming Jodie Sweetin (and not the new-and-improved version).

I've heard that I might lose me to meth. And that wouldn't be funny at all, would it?

"90210": Honestly, the only way the identity of Kelly's baby-daddy was going to excite me was if it was Steve or David, somebody where your reaction would be, "Ummm... EW!" But Dylan is too predictable and just forces us to either wait for Luke Perry to get off his high horse or for the show to get cancelled, whichever comes first.

Did anybody else find their stomach twisting every time AnnaLynne McCord's Naomi squealed "I'm freakin' out!" during Tuesday's episode? And does anybody understand why the writers have given McCord all of the emotional heavy-lifting fr the season's first three episodes? Some actresses look comfortable and graceful crying. She looks uncomfortable and constipated. She also looks 15 years older. Meanwhile, she gets gets to be happy and flirty, she's much better as an actor and she looks much prettier.

And did anybody else have a weird stomach twisting moment at the revelation that Ethan has a brother who's an actor playing an autistic dude? Because that was arbitrary. How often do you think we'll ever see him again? That was nearly bad as the plaid shorts Ethan's wearing in two different scenes on two different days.

Where was Navid at this week? And why are all of the boys such ciphers? Before he just became an off-screen sperm provider, Dylan McKay was freakin' DANGEROUS! He drank, he caroused, he surfed. Girls wanted to do him and men wanted to be him! And he was like that from his first episode. The new men are Jonas Brothers pure, even if they're getting blown by random gals in the front seats of their cars. I can see why some teenage girls might think they're cute, but none of them are cool. Can you imagine what Michael from "The Wire" would make of Tristan? He'd jack his car, pistol-whip him and leave him by the side of the road. Now *Michael* is the sort of bad boy who would stir things up at West Beverly.

And as for the relationship between Dixon and Silver... I'm there. Good for them. I hope they get it on. But aren't the producers pussy-footing around that relationship just a bit? I don't wanna imply that we still have fears about interracial relationships on TV in 2008, but... well... I mean, Ethan and Naomi are hot-and-cold, but you *know* they're doin' it. And Annie practically handed Ty her virginity in a red tin last night. I mean, she called it "snickerdoodles," but we all know what she meant. But Silver and Dixon are stuck making moon-eyes at each other? Come on! Surely Nat has some romantic advice for Dixon.

Lastly, it was good to have Tabitha back, but it was only a reminder that Jessica Walter is on a different show. Oooh! How about she drop by "Fringe" as Walter Bishop's girlfriend from the asylum. They were together for 17 years and now she escapes to share crazy with him? Sounds good to me.

And that's that with that...