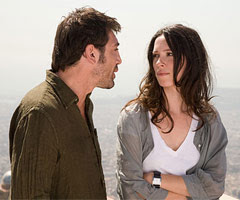 But Allen's entire career at this point is being graded on the curve. After "Anything Else" and "Hollywood Ending" and the professional nadir that was "The Curse of the Jade Scorpion," Allen got to the point where his name was under-played in the ads for "Melinda and Melinda" and, particularly, "Match Point." But "Match Point" was such a hit that Allen's name was front-and-center in the advertising for "Scoop," which tanked. It was less visible on "Cassandra's Dream" and missing from most promotion for "Vicky Cristina Barcelona." This latest film, now, has performed well enough that Allen's name can be resurrected for next year's "Whatever Works." But after three Oscars and dozens of nominations, Allen's commercial status can apparently only be judged on a film-by-film basis these days. I find that a bit sad.

Anyway, a full review of "Vicky Cristina Barcelona" after the bump...


After three films of questionable inspiration in London, particularly the uber-generic "Cassandra's Dream," Allen's back on familiar footing with "Vicky Cristina Barcelona," which comes across as a cute, albeit less-than-substantial meditation on men, women, love, relationships, art and cultural differences.

It's very much a Woody Allen Film. Again, this is a relief in light of "Cassandra's Dream," where the director's thematic concerns with class mobility and the mistakes we make to move up in the world were evident, but his voice was missing. "Vicky Cristina Barcelona" is a return to that sort of pleasant Allen standard where the characters all mimic the writer-director's hyper-articulate stammer, whether they're narrating the film or speaking in Spanish. This isn't a straight-forward comedy, though, and this isn't Allen in Borscht Belt one-liner territory, so Rebecca Hall's obvious Woody-inspired inflections seem less annoying than, say, watching Kenneth Branagh stumble through being Woody in "Celebrity."

In terms of narrative, the film is pretty thin: Two American girls spend the summer in Barcelona, experience three months of upheaval and leave either surprisingly changed or surprisingly unchanged. And Allen falls victim to the most predictable type of reductive Europhilia, coming dangerously close to caricaturing the Spanish characters as unbearably lusty and spirited and the American characters as unbearably desiccated and over-intellectual. Even Scarlett Johansson's character, a self-proclaimed bohemian, is impossibly uptight, both before and after she meets Javier Bardem's Juan Antonio, the artist to end all artists. Allen is just a bit too smart to buy into the stereotyping trap and there's a self-awareness to both his caricatured Spanish characters and the impact the American temperament has on their lives. The question of whether the vernal clash of cultures improves anybody's life is very much still open in the end.

It isn't profound stuff, nor are Allen's observations about Spanish culture, though I think we're supposed to be seeing Barcelona through the callow and predictable eyes of the two Americans and not the way the city would ever be seen by a true insider. This isn't a Pedro Almodovar film.

This isn't a Pedro Almodovar film, though its best performances come from Almodovar veterans Bardem and Penelope Cruz.

As the unapologetic Lothario, Bardem showcases an ever-improving comfort with English dialogue as he spars and parries with the two leading ladies. He's coasting on confidence and charm, though, until Cruz shows up and absolutely galvanizes the movie.

Though the movie features a scene from Hitchcock's "Shadow of a Doubt," Cruz' character made me think of a different Joseph Cotton movie, "The Third Man." Maria Elena is very much the Harry Lime of "Vicky Cristina Barcelona." The characters spend nearly an hour constantly discussing her and then when she shows up, stunningly gorgeous and unbearably twitchy and manic depressive, it gets new life. The three or four years she spent giving unconvincing performances in English language films have succeeded in making Cruz a constant revelation, even though she's proved herself plenty of times in her native tongue.

I wonder if rather than being hailed as Allen's latest muse, Johansson should be somewhat insulted by the circumstances she appears to inspire. In "Match Point," she was a properly lusty temptation, but in "Scoop" and now "Vicky Cristina Barcelona," Allen has subsequently made her a callow and directionless tourist in both England and Spain, the American blank slate overwhelmed by even the slightest hints of foreign culture. Add in her work in "Lost in Translation," and it's tempting to wonder what other countries could baffle and entrance Johansson, while she's still young. Who knows what utterly unaffected, dead-eyed wonderment she could find in Italy or the Galapagos or just about any place in Africa? If this is her niche, I guess she'd better just keep rocking it.

As for Hall, I just like her. She decently conveys intelligence and she looks like a cross between old Girl Next Door Kate Beckinsale and new Ridiculously Hot But Somehow Artificial But Still Cool Kate Beckinsale.

Anyway, "Vicky Cristina Barcelona" is nicely shot by Javier Aguirresarobe, another Almodovar veteran, who fits plenty of Gaudi into the frame without ever making it seem like he was looking for a freelance gig as a postcard photographer. I still wish that when I did my European gallivanting I'd spent time in Barcelona and Madrid. That was a mistake.