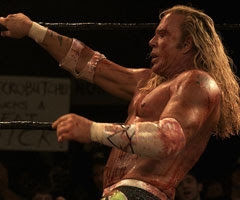 "The Wrestler"
Director: Darren Aronofsky
Fien Print Rating (Out of 100): Pending
In a Nutshell: ["The Wrestler" isn't coming out until the end of December and even though I really enjoyed the movie, I dunno how much Fox Searchlight would want me posting a full review, no matter how much I liked it. And I liked it *a lot*. But this really will be just a "nutshell."]

"The Wrestler" will be pushed for heavy Oscar consideration and the buzz is building thanks to festival screenings in Venice and Toronto, but it's really a very small movie and it may not be capable of sustaining an extreme amount of hype, the sort of hype that will almost certainly grow. I'd advise keeping expectations moderate once the hype explodes, but I advised the same thing on "Juno" last year and it mostly held up to the hype, backlash-be-damned.

Assuming Mickey Rourke doesn't do something hugely embarrassing between now and award season (obviously a distinct possibility), he'll be a lock for an Oscar nomination. I'd call the performance Brando-esque in its combination of emotional vulnerability and physical intensity, but not the young Brando. I'm thinking more the "Last Tango in Paris" Brando. The relief of seeing that the young Rourke's Method-y potential wasn't entirely wasted through the Lost '90s is palpable in nearly every scene.

And Marisa Tomei is every bit as worthy of awards attention, plus I think you can guarantee that she'll win her second consecutive annual commendation for Mr. Skin for cinematic nudity. Let's just say she isn't one of those stupid Natalie Portman-esque movie strippers who practically wear a parka on the poll. It baffles me that people still mention Tomei on lists of odd or undeserving Oscar winners. She's more than proven her worth as an actress and she's more than proven that her gifts go far beyond one-note comedy. She keeps getting better.

Since I've only really enjoyed one Aronofsky movie without reservations ("Requiem for a Dream"), I was impressed at how restrained and smart his direction is here. Robert D. Siegel's script is mostly strong and understated, but when it stumbles into more conventional Movie Moment territory, Aronofsky's touch is uncharacteristically humane and gentle.

I'll have more to say come December, but I just wanted to whet a few appetites. This one will most likely be heading for my yearly Top 10.
Tweet