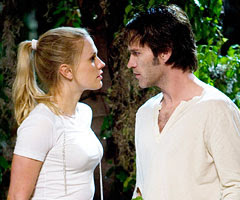 I'm not prone to beginning blog posts with quotes from the New Testament, but in reflecting on HBO's Sunday night lineup, I kept coming back to...

Now obviously this quote from first Corinthians doesn't have a DARNED thing to do with me. I watch TV for a living and at my most mature, I'm fairly infantile.

But what I *do* know is that two subjects that used to excite and entertain me a heck of a lot more than they do now are the glamorous lives of Hollywood stars and the sex lives of vampires.

Follow through after the bump to see how that impacts my initial opinions on the premieres of "True Blood" and "Entourage"...


I'm not sure I was ever a devotee of supermarket tabloids dedicated to celebrity gossip and tawdry rumor-mongering, but I was a pretty big fan of the first two-and-a-half seasons of HBO's "Entourage." Things started getting messy when the second half of the third season was followed within two weeks by the fourth season and suddenly the show ceased to be funny at all. Yes, "Entourage" got a ridiculously undeserved outstanding comedy series Emmy nomination for that dreadful period, but not only had the series' characters become one-note and unrecognizable, but the events of excess that made up their lives had become uninteresting, or even boring. Either I'd seen enough A-list debauchery that it was no longer amusing, or else Doug Ellin and company had lost control. It's not like I was going to stop watching, but my four episodes the new season of "Entourage" sat next to my TV for nearly two weeks before I got around to feeling like watching them, which never would have happened two years ago.

Just as I never would stop watching "Entourage," it's hard for me to protest that I'm sick of the sex lives of vampires when entirely too much of my summer reading time was dedicated to four books of the "Twilight" series and the first part of Charlaine Harris' Southern Vampire Mysteries, which are the basis for "True Blood." At a certain point, I lost track of which vampires were afraid of the sun, which vampires just sparkled, which mortal girls were having raucous sex with their vampire girls and which vampires had intimacy issues.

My problem is that I was absolutely a vampire obsessed child, a huge fan of "Dracula," "Salem's Lot" and the more foundational vampire texts by Polidori and Le Fanu. I loved me some vampires, but not in the way that teenage girls and middle-aged housewives love them some vampires. I loved vampires because they were really freakin' scary and because they drank blood and they were really hard to kill. The fact that they were immortal and that being immortal makes you really broody and soulful and complicated really didn't register on my appreciative radar. And the fact that Dracula kept a trio of sexy vampire women in his basement seemed *hot* but it didn't seem romantic in any real way. Even when I later became a "Buffy" and "Angel" fan, I mostly liked the demons, the dialogue and Sarah Michelle Gellar, but I never got invested in Buffy-Angel 'shipping. I've always hated Anne Rice's purple prose and when "Moonlight" premiered and it became clear that the show was going to be nothing but trenchcoats, yearning glances and forbidden love, I mostly tuned it out.

With that as context, how are HBO's Sunday premieres of "Entourage" and "True Blood"?

"Entourage": The show's producers have to figure out which things are funny for Adrien Grenier's Vincent Chase and, more importantly, for how long. Success, it turns out, was only funny for a little over a season and artistic hubris, the kind that accompanied the production of "Medellin," was funny for even less time. But Vince's failure and eventual comeback? That may be fruitful comic territory, as the premiere begins with Richard Roeper tearing "Medellin" to shreds, which is hopefully another joke, the idea that anybody anywhere would actually get invested in Richard Roeper's opinion about a movie. Seeing the character respond to the absence of success is good for a few chuckles and over the next three episodes watching him figure out the realities of his career status, also funny.

What "Entourage" hasn't actually done yet, and why you shouldn't believe all of those "'Entourage' Is Back!" stories, is recovered the identity of any of the supporting characters. If Jerry Ferrara's Turtle ever had any individual characteristics, he's mostly lost them, while Kevin Connolly's Eric has yet to find viable storylines in his new arc as a struggling manager. Jeremy Piven's Ari Gold has been a one-note character for the better part of three seasons and I ceased to find the character funny a long time ago, but Emmy voters and frat boys still seem to love the shtick, so who am I to complain. The worst victim of the show's nebulous direction is Kevin Dillon's Johnny Drama, who was my favorite character back in the day. It turns out, though, that Drama finding success hasn't been as funny or as believable as the show's creative team seems to think. And, oddly, through four episodes the show hasn't made any profitable use out of what would seem to be its most fertile territory: At some point Johnny was the successful brother, while Vince was just the young pup without a career, but then the roles were reversed for a long time. We've had almost no inkling of the re-reversed sibling dynamic, of what happens to this entourage when they face the fact that they may be Johnny and not Vince's posse. That's a big miss, if you ask me.

One of the things about "Entourage" is that it often rises and falls on how much you enjoy its self-mocking Hollywood cameos. In the premiere, Roeper and NBC-Universal's Prom King Ben Silverman pop up and disappointingly, aren't funny.

Since the premiere is mostly dedicated to bringing Vince back to Los Angeles, subsequent episodes feel a bit more plot-y, in a good way. In those episodes, the Johnny Drama plots become increasingly more annoying, but other storylines find their footing.

"True Blood" I think that if you view "True Blood" as drama, you're going to be sorely disappointed, even if you just accept that it's a soap opera in which one major subplot involves people who suck blood (not that "Dark Shadows" didn't get there first).

At press tour and subsequently, Alan Ball tried to emphasize that vampirism in "True Blood" isn't a metaphor for homosexuality or, really, for any number of other things that it could be a metaphor for. He's telling the truth, actually, which is part of why "True Blood" comes across as so very empty and silly. It isn't even like vampires could be standing in for any outsider in our midst. One of the changes Ball and company make from the book is advancing the idea of vampire civil rights, but their commitment to the absurd idea is minimal at best. For the most part, vampires do, indeed, seem to be more violent and more dangerous than normal parts of society and therefore the idea that they're entitled to equal protection under the law is really silly.

But really, the show itself is pretty silly, despite being played utterly straight. Painfully straight. Ball's sense of ironic black comedy, evident in the best parts of "Six Feet Under" and "American Beauty" is entirely absent in "True Blood" and I'm pretty confident that the only times I laughed were unintentional.

"True Blood" is pretty pure camp, funny only for over over-the-top and miscalculated every second of it is. The vampire effects are silly. The Southern Gothic trappings are caricatured and silly. The sex scenes are bizarre and silly. The Southern accents -- all seemingly lifted from my high school production of "To Kill a Mockingbird" -- are beyond silly. The show is filmed in a mixture of Louisiana locations and Los Angeles sets and you probably won't be able to tell the difference, which makes the Southern settings silly. And what makes it even sillier is how familiar every second feels. The preponderance of vampire cliches and Southern Gothic cliches leave no room for anything fresh.

You know what would be a fresh and awesome portrayal of a vampire? One who's neither brooding nor sadistic. A vampire who's made piece with his lifestyle and just lives life, occasionally enjoying a good book or a DVD or a sporting event for entertainment. As vamp-y Bill Compton, Stephen Moyer doesn't go down any original paths. He furrows his brow, speaks with a bad accent and that's enough for Anna Paquin's Sookie to fall for him. And, I suspect, it will be enough for myriad female viewers to fall for him. The book did a marginally better job of conveying his appeal, but in the show, Sookie falls for the vampire because that's what girls do.

Paquin survives the early episodes with more of her dignity intact than anybody else. Her accent isn't exactly right, but it's consistent and sometimes that's enough, especially if my choices are the twangs provided by the British Moyer and Ryan Kwanten, an Aussie. [Are there no Southern actors in Hollywood? None that HBO could find.] The little girl from "The Piano" has been maturing into a sexy young lady for some time, though she remains the most clothed member of the cast. WTF, Alan Ball?

But as I said, I think there are ways to enjoy "True Blood." The most obvious way is to be one of those people who gets weak-in-the-knees by ANY story about vampire-on-mortal lovin'. That will probably be the show's biggest audience anyway. But there's a better way that involves oodles of alcohol and a well conceived drinking game. Close-up of Spanish moss? DRINK! Kinky vamp sex? DRINK! Unintentional giggle at cheesy vamp make-up? DRINK and giggle some more. Etc.

I'll certainly be watching. So much for putting away my childish things.