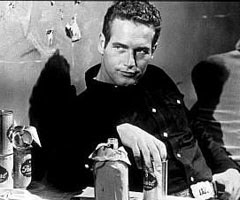 [This post was, of course, started on Saturday. Then things got busy... Better to post it now, even if somewhat truncated...]

If you go through Paul Newman's credits, there are certainly examples of roles in which he tried out accents. There are examples of him playing parts where he experimented with facial hair. A couple times, one of Hollywood's most lauded and conspicuous philanthropists went wildly against type and played characters who you'd consider to be villains.

When listing the great actors of the past 50 years, Newman's always there, but isn't he somewhat overshadowed by the Pacinos, the Brandos and the De Niros? The tendency is to over-rate the actor who appears to be working the hardest and to sell short the actor whose efforts seem most effort-less.

Paul Newman gets sold short for having been so pretty for so long and never being one of those actors who said, "I have to play ugly to get my Oscar." He gets penalized, I guess, for never making people go, "I can't believe that was Paul Newman in that role!" There's even a tendency to call Paul Newman "Eternally Cool" or "A True Movie Star," which are both sweet sentiments, but they're also both minimizing.

As much as he was adored, Paul Newman was taken for granted, or at least his greatness as an actor was.

A glance at my favorite Newman performances after the bump...


"Road to Perdition" -- We've seen aging crimebosses before on the big screen. Newman's John Rooney is one of my favorites, because of just how much Newman does with so very little by way of character. His entire relationship with both his real son (played by before-he-was-Bond Daniel Craig) and his surrogate son (Tom Hanks) is spelled out with almost no dialogue. Although he won an Emmy for hamming it up marvelously in "Empire Falls," this is Newman's last near-great performance.

"Nobody's Fool" -- This, then, would be Newman's last *great* performance and one of those instances where the movie wouldn't exist at all without Newman. I mean, we're talking a Hallmark Channel movie with anybody else in the lead role. But for Newman, it was absolutely a career capper, the idea of what would have happened to one of Newman's classic '60s rebels if his life just petered out into chilly small-town obscurity (rather than the one-last-chance-at-glory version of what happened to Eddie Felson in "The Color of Money").

"The Verdict" -- The year before, Newman had received his first acting Oscar nomination in 14 years for "Absence of Malice," which may be one of my least favorite of his films. I'm not sure that I love "The Verdict" very much as a movie either. Both David Mamet's script and Sidney Lumet's direction are too damn "serious" for me, or two drenched in the trappings of seriousness. But if the alcoholic lawyer deciding to take one last chance at recovering his soul has become a big and small screen archetype in the 25 years since, it's because of Newman's awesomeness in the role. Newman sells the movie's earnestness.

"Slapshot" -- This is one of those classic examples of of much an actor can get away with if he's charming enough. It's not that Newman is the only actor who could have played Reg Dunlap. Dozens of actors could have. But the tendency would have been to try to soften the utter wreck of a character in order to make him sympathetic and winning. Newman doesn't play down to the audience at all. He's slick and unappealing and Newman makes us love and support him for those reasons and not for anything else.

"Hud" - "Hud" is actually my favorite Newman performance. By far. And, like "Slapshot," it's another example of a Newman character who you aren't supposed to like, but who you do anyway. The tendency in Hollywood is for a writer to write an unsympathetic leading character and for a studio to say, "We like the script, but make the character a bit softer." And the writers do and the films suffer, because giving a misanthrope a cute dog or a adorable child sidekick or a redeeming love interest cheapens that fact that some people just aren't heroic or just aren't appealing in conventional ways. Hiring Paul Newman was like a trick. He was like a way of making audiences like (or at least willingly follow) characters they'd otherwise hate. Characters you'd root to see fail in 99.9% of circumstances. And Newman never cheated. He just played the roles properly. "Hud," incidentally, would probably go on my list of the 10 most underappreciated American films. It just doesn't get thrown into the discussion of classics nearly enough...

"The Hustler," "Cool Hand Luke," "Butch Cassidy and the Sundance Kid" and "The Sting" -- Duh.
Tweet