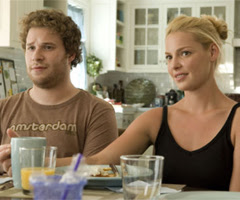 I confess that I'm predisposed to liking any movie with the good-natured audacity to play ODB's "Shimmy Ya" over the opening credits (a montaged paean to masculinity unloosed) and Loudon Wainwright over the closing credits. Judd Apatow's second feature as a writer-director proves that the free-flowing mix of raunch and heart of his first film was no fluke (not that any "Undeclared" or "Freaks & Geeks" or "Cable Guy" fans were afraid he wouldn't be able to repeat). While "Knocked Up" suffers from the exact same flaws as "40 Year-Old Virgin" -- it's at least 10-to-15 minutes too long, with Apatow erring on the side of his cast's improvised hilarity even at the expense of pacing and focus -- but for my money it's a far funnier movie. Though certainly anchored by star-confirming performances by Apatow's muse Seth Rogen and worthy secondary muse Katherine Heigl, "Knocked Up" has an outrageous number of secondary players capable of getting laughs as well.

It's no surprise that some of the movie's best comedy comes from Rogen and Paul Rudd playing off each other, or that Apatow's wife Leslie Mann adds spark. Nor will fans of the Apatow-verse be surprised at the irresistible laughs to be mined from sitting Martin Starr, Jay Baruchel, Jonah Hill and Jason Segel (playing characters named Martin, Jay, Jonah and Jason) in a circle and letting them go. But who is Charlyne Yi and while is her stoner-chick Jodi such a hoot? And how does Kristen Wiig manage to get chuckles out of every single line of withering dialogue as Heigl's colleague at E!... And who'd have guessed that Apatow and Mann's kids Iris and Maude would prove to be far more endearing-than-usual little actors? The tone of the movie is so perfectly pitched that even Ryan freakin' Seacrest was able to earn some warm feelings on my part for delving into marginal self-parody.

The film is R-rated and the dialogue is unrelentingly raunchy and it has the most out-of-left-field graphic childbirth scene since "Dr. T and the Women." But as every other reviewer on Earth is liable to mention, "Knocked Up" is genuinely conservative at heart. This is a movie in which the main character, a beautiful, rising TV reporter, gets knocked up after a one-night stand with an immature, pot-and-porn addict schlub and the word "abortion" is never mentioned (at least not outside up poorly veiled code). It's about growing up, taking responsibility and settling down, about being a good parent and a good spouse over all other concerns. The Moral Majority should hop in line to see this movie immediately. They probably won't. But every moment of grossness or immaturity is totally undercut by sweetness and heart, which I mean in a good way at least 85% of the time.

Apatow has to frontload the laughs a bit in order to earn the heart at the end, which was also the case with "Virgin" if I recall correctly. That's part of why the movie starts lagging slightly in its second act (right around the time Mann's character starts worrying that Rudd's character is cheating on her but before the most brilliant use of Cirque du Soleil ever). For all that, though, I look forward to the extended DVD release that you know if gonna come.

After three straight big-budget franchise duds to start this summer, "Knocked Up" is a great change of pace. I'd expect box office to follow suit.