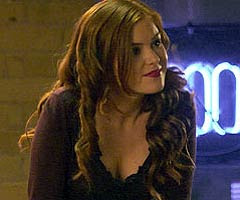 "The Lookout"
Director: Scott Frank
Fien Print Rating (Out of 100): 74
In a Nutshell: A moody and frequently depressing mix of "Memento," "The Curious Incident of the Dog in the Night-time," "Brick" and sanitized Jim Thompson, Scott Frank's "The Lookout" keeps being referred to as neo-noir, which is just because for lazy film critics "noir" has become a catch-all that encompasses all variety of vintage pulp thrillers, some of which are noir and some -- like this film, really -- aren't. I'm OK with a revised catch-all like "film blanc" -- a term that could be used for more successful efforts like "Fargo" and "A Simple Plan" (both more Thompson than anything noir-y) and less successful (but not uninteresting) stabs like "The Ice Harvest" -- but even that isn't exactly right. Regardless, my only point is even if all noir films are somewhat pulpy, not all pulpy films are noir and I guess we should blame 20th Century Fox and several other companies for releasing dozens of different '40s and '50s B-movies under the "noir" banner because they needed a selling point.

OK. Deep breath. I really didn't mean to go off on a ramble there.

To be quickly reductive in a different way -- I really liked "The Lookout." The statement "Joseph Gordon Levitt is becoming a strong dramatic actor" is one that I'm finding as offensive as the over-categorization as noir. Joseph Gordon Levitt *is* a strong dramatic actor. The "becoming" process took place over the course of "Manic" and "Mysterious Skin" and "Brick." He's arrived, not that he should be necessarily exempted for his mis-steps just yet (the way we do with Edward Norton, who gets over-praised even when his performances are awful -- see, "The Illusionist). His work in "The Lookout" -- as a former hockey star turned brain-damaged burnout after a horrible accident -- is deceptively placid. That, in fact, may be Gordon Levitt's "thing," going flat on the surface and letting his body language and eyes convey the rest. Here, it's mostly frustration and poorly contained rage, as the character's mind and body have both betrayed him and he can't blame anybody but himself.

Frank's script wanders a bit too close to allegory at times, over-layering thematic and visual metaphors and setting up too many images and snippets of dialogue for future use. But he stays true to the pulp formula of the crippled man who becomes the pawn of a charismatic criminal (Matthew Goode, completely unrecognizable from "Match Point" and *shudder* "Chasing Liberty") and a squeaky-voiced moll (Isla Fisher, who deserved much more screentime than she gets here). Thompson would have had the guts to surround the main character with different shades of grotesques and never would have settled for a semi-femme fatale as adorable and winsome as Fisher, but so it goes. The story takes place in Manitoba, which is pretending to be Kansas, but won't fool anybody. Midwestern America? Midwestern Canada? Same difference, eh?

Frank's directing eye is attuned to performance nuance and every member of the cast is superior, including Jeff Daniels adding a dose of humor as the main character's blind buddy and Bruce McGill, who plays Gordon Levitt's father with a perfect shade of wealthy rectitude and pity. The acting was so good that I was generally overcome by the melancholy of the piece, the sense of pervasive doom, the same sort of encroaching, twisted downer I get from reading a good Thompson story, only not as twisted. Frank isn't aiming quite that deep and "The Lookout" finds an ending that's more crowd-pleasing (people in my audience clapped) than would have pleased me.

The absence of twistedness that slightly disappointed me at the end isn't the same as the lack of twistyness that will probably disappoint other viewers. We've seen so many of these slick crime thrillers that we have come to expect trickery, but "The Lookout" can't think any faster than its lead character. I was totally OK with that. Frank may have adapted "Get Shorty" for the big screen, but "The Lookout" is less quippy and cool, more sad and yearning.