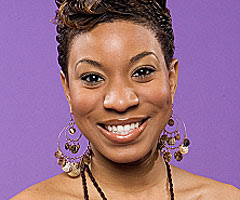 First off, Wednesday night's American Idol result wasn't a shocker, no matter what E! and the AP and other various media outlets are saying. The only people shocked were people who don't know the way this show works. For heaven's sakes, Tony Kornheiser was predicting Stephanie's potentially surprising departure and as much as I love the guy, American Idol isn't his bread-and-butter (he should consider himself lucky).

The elimination of Stephanie Edwards does, indeed, weaken the show for the rest of the season. It was, indeed, hardly the correct elimination choice. But the notion that it was in any way shocking is ludicrous.

The maxim always goes that without a compelling story and quality on-air pimping time, you just can't go very far on this show. It's always been true and it was true with Stephanie, just as it was with Sabrina Sloan, the season's other so-called-shocker.

Stephanie was this season's fourth best vocalist, but also the season's fourth best female vocalist, which meant that at almost all times, she had to steal attention from several other women just to be noticed at all. She was never as good as Melinda or LaKisha and in the past two weeks, she hasn't been as good as Jordin. At a certain point, she just wasn't in position to get those female votes, because there were other options. And while she was a very good-looking woman (certainly moreso, conventionally, than Melinda and LaKisha), Stephanie was never going to get the lecherous male vote as long as first Antonella and later Haley were around. So who was going to vote for her? Sabrina had the flaw of being the *fifth* best female singer in the competition, so she had even less margin for error. Regardless, both women had to know that the second they delivered a so-so performance or two, they'd be gone. And that's how it went.

What else did Stephanie have to draw votes? Did she have a fantastic backstory about overcoming adversity or giving a kidney to a beloved relative or saving orphaned dogs? I don't know. I know *nothing* about Stephanie Edwards. LaKisha's a mom. Gina's auditioned over and over again. Haley's smokin' hot (but not as hot as Katherine McPhee). Jordin wants a boyfriend and her dad played in the NFL. Melinda was a background singer. Antonella was caught in near-nudie pics.

And Stephanie? She was too talented to be eliminated this soon, but whatever they told me about Stephanie, I promptly forgot, because "Idol" wasn't interested in telling her story.

She's not the first contestant to suffer this fate, nor will she be the last. Could somebody discuss that with a couple rare exceptions (Chris Daughtry, mostly), most of the most egregiously prematurely booted contestants were African-American females. Tamyra. LaShundra (Ooops... "Trenyce"). Jennifer Hudson. LaToya London. That's not a coincidence, though it also probably isn't racism, at least not pure and simple. Whatever the case, it happens enough that it's not shocking, no matter what "Idol" neophytes may try selling you. That doesn't make it any less disappointing, though.

I could go on, but I'm tired and full of steak.
Tweet