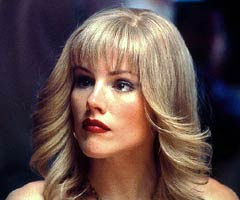 None of these seem to require their own post, but when they unite, they're like Voltron, baby.

2) Again, I'm not ready to stop pushing for Robertson, but with at least some measure on that front and in my Keep Eric Balfour Busy campaign, I must once again remind those of you who haven't done so to go sign my petition to get "Method & Red" released on DVD. It's slow-going, but you too can help enact tangible change.

3) Check out the new K-Swiss "Free Running" commercial in which some guy uses the powers of parkour to make it to the stadium in time to watch Anna Kournikova play tennis. I'm still impressed by folks running up the sides of buildings and whatnot, but is the commercial's true message that K-Swiss shoes have the ability to transport you to the past? I mean, K-Swiss is discovering the marketing might of parkour five years after Nike's classic Angry Chicken ad from 2002, which is appropriate, because that was the last time anybody spotted Anna Kournikova playing tennis.

4) When did Avril Lavigne and Kristen Bell cease to be different people? I'm sure that Kirsten Bell would be able to pick up Avril's singing slack, so it's possible that Avril no longer needs to be with us.

5) Did ABC get a package deal on Three Dog Night's "Shambala"? First it was the song in Hurley's flashback and then in his miraculously repaired mini-bus on "Lost" and then it was the song that signaled Bryan Greenberg's liberation from New York City on "October Road." Toss in its more ironic usage in "The Devil's Rejects" and that's a lot of exposure for a 34-year-old chestnut.

6) And last and probably least... If you live in Los Angeles, you've gotta head over to Olympic and Robertson to check out the shiny new BP gas station [Or just check out pics here]. It's either the ugliest gas station I've ever seen, or else the coolest. I'm not sure. All I know is that last week, the gas station was closed to the public so that they could host a private party there. At a gas station. As my homeboy Yakov would say -- What a country!
Tweet