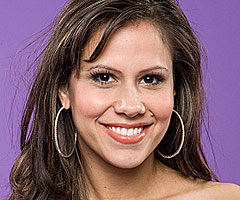 Show of hands -- How many of you are planning on going to Idol Camp with me this summer? Swimming! Sailing! Shabbat dinners! Obscure theme nights! It'll be just like Meatballs!

OK. On to Tuesday (March 20) night's performances, as our Top 10 (Plus Sanjaya) perform entirely random British Invasion tunes under the esteemed tutelage of Lulu and Hermit (from Herman's Hermits [Peter Noone, if you like])

Singer: Haley Scarnato
Song: "Tell Him"
My Take: I liked Lulu telling Haley not to be intimidated by the girls with the bigger voices and to just be proud of what she's got. Tonight? As ZZ Top observed, she's got legs. The performance starts with a dramatic center-stage leg-cross and continues with Haley parading her wares through the audience and then strutting with determination across the stage in her short-shorts and high heels. Even after forgetting the words last week, Haley doesn't seem at all confident with the lyrics tonight. She never actually misses any words, I don't think, but she certainly descends into mumbling on several occasions. I'm cheering for her ability to stay standing throughout and for her saucy chest-wiggling climax. That sounds dirty, doesn't it? It's so very pageant-ready I expect her to close by making a plea for world peace.
Klotho, Atropos and Simon Say: Randy's enthusiastic, declaring this Haley's best performance, gushing that she has the "Yo!" factor. I guess that's a bit more dignified than "Girl, you got gams!" Paula praises her, um, girl-ish side (also clearly euphemistic). "You naughty little thing," Simon declares, thankfully shunning coy language and calling it fun, young and a bit shrieky. He warns that the people will be talking about more than her singing, which gets a teasing raised eyebrow from Haley.

Singer: Chris Richardson
Song: "Don't Let the Sun Catch You Crying"
My Take: I cringed through last week's Diana Ross Night, but I love tonight's theme. Even with a stripped down performance -- just the singer and a guitarist on the stage -- Chris oversings just a bit, not trusting the pure melody quite enough. Still, this is was decidedly his best vocal turn of the competition thus far -- less nasally, less breathy, more pure -- even if I wasn't fully buying his half-lidded sincerity.
Klotho, Atropos and Simon Say: Randy's feeling tonight, calling it beautiful. Paula, stealing from Randy's playbook, says Chris is in it to win it. Simon agrees that it was Chris' best.

Singer: Stephanie Edwards
Song: "You Don't Have To Say You Love"
My Take: How much is Stephanie's degree-of-difficulty elevated by the campy arrangement that forces her to compete with what sounds like a 50 person choir? It's a big, bold, soulful song that requires total confidence in your voice. Although she should be that self-assured, Stephanie keeps pushing the ends of notes with vibrato and flourishes that Dusty Springfield never needed to bother with. Stephanie's in a tough position, because she tries hard songs, songs that none of the men could even sniff at, but only doing so-so work on those songs puts her in danger.
Klotho, Atropos and Simon Say: Randy thought it was pitchy and that she's a better up-tempo songs. Paula loved her outfit and the song, but contends that she isn't having enough fun. Simon asks how she thought she did. She replies "Well." Simon argues that it was a cabaret performance and that she's becoming too old.

Singer: Blake Lewis
Song: "Time of the Season"
My Take: The thing I've always loved most about the original is its eerie, deliberate phrasing. Squinting at the gals in the audience and cocking his head suggestively, beatboxing and dancing through the breaks, Blake gives it his own twist, which I'm not entirely opposed to. However, the arrangement elevates the song painfully out of Blake's range and his attempts to approach the chorus with anthemic high notes -- a head-voice at odd with the rest of the performance -- only exposes his limitations. Actually, if you go back and listen, he does very little actual singing, filling in the gaps with the beatboxing.
Klotho, Atropos and Simon Say: Randy is impressed with how current Blake made the song. Paula thinks Blake could release it and that he's raised the bar. Simon just calls it a million times better than last week. I feel like this is one Simon will listen to tonight and wonder why he was so enthusiastic.

Singer: LaKisha Jones
Song: "Diamonds are Forever"
My Take: How do I feel about LaKisha's very calculated attempts at mimicking Shirley Bassey's very particular twist on the lyrics? Well, it keeps her from making the song her own. This is the kind of thing you can --- I'm just guessing here -- catch in drag bars or wherever people love their Shirley Bassey impersonators. But it isn't easy to do Shirley Bassey like Shirley Bassey and I doubt you can here Shirley Bassey impersonators this good just anywhere. Some of LaKisha's phrasing is spectacularly on-point, but why do I think Melinda could have done the same song with far more panache and individuality?
Klotho, Atropos and Simon Say: Randy didn't feel enough LaKisha (the audience boos, but he's right). Paula says absolutely nothing about the performance. Simon calls it "LaKisha in 50 years time."

As always, for the rest of my Recap, including reviews of the night's best and worst performances, head over to Zap2it.
Tweet