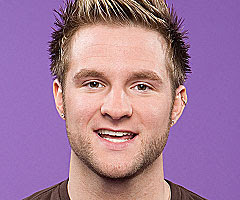 I was at an event the other night where they showed us an edited version of last year's Idol finale and I found myself wondering: Is there a single guy this season on the level of Taylor Hicks, Elliott Yamin or Chris Daughtry? Short answer -- Nope.

Maybe Tuesday (Match 6) night's American Idol performance episode will feature a breakout performance from one of the Top Eight Men...

Singer: Blake Lewis
Song: "All Mixed Up"
My Take: Will Jimmy Walker Blue, Blake's redneck alter ego cost him votes in the key Southern States? He probably should. This is another entirely unexpected artist selection from Blake, somehow trying to tailor 311 to the Idol format. The vocal turntablism is fun as usual, but it's just a low-key mimeograph of the original. This is the first time I've felt that Blake was basically coming across as the lead singer of the kind of band that plays frat parties and really wants to do its own stuff, but has to whip out a few lackadaisical covers for the drunken masses.

Melchior, Balthasar and Simon Say: Randy, who's never heard the song, loved how current it is. Paula also didn't know the song, but liked it. Hmmm... How hip. The song comes off a 1995 album. Simon didn't understand a word of the song, but says Blake stands out and that it wasn't karaoke. How would Simon know if it sounded like karaoke if he doesn't know the song?

Singer: Sanjaya Malakar
Song: "Waiting On the World to Change"
My Take: Sanjaya caters to the all-powerful Hawaiian voting block by showing off his hula skillz. What's next, a shout-out to Camile Velasco? After mis-rocking the Corey Clark ponytail last week, Sanjaya has ironed his hair tonight. It's quite straight and well-conditioned. Bravo and well-coiffed, Sanjaya. If I keep talking about his hair can I just not address the performance? He's now had three straight weeks without showing a second of emotion, without building to a single powerful note and without putting his stamp on a single moment.
Melchior, Balthasar and Simon Say: Randy calls him on his lack of energy and wonders where Sanjaya's spark went. Paula doesn't agree completely, but sure agrees mostly. Simon's good news is that it wasn't as ghastly as last week and suggests that Sanjaya's hair might be keeping him in.

Singer: Sundance Head
Song: "Jeremy"
My Take: Ugh. Is anything more 1993 than an awful Eddie Vedder impression? It's just a shrieky version of what every guy I knew in high school used to think was a flawless Pearl Jam voice. We were wrong. Sundance doesn't get any favors from an arrangement that seems to pick up at an arbitrary point mid-verse and the background chorus of red-shirted "Hoot"-ing African-American women is just hilarious.
Melchior, Balthasar and Simon Say: Randy, though, found it kind of hot and appreciated the try. Paula says he pulled into his Sundance groove mid-way through. Simon thought he lost his charm and became a generic bar singer. Sundance argues that the shouting-over-singing style was true to the original. He's wrong.

Singer: Chris Richardson
Song: "Tonight I Wanna Cry"
My Take: Taking a one-week hiatus from bouncing around like a boy without a boy band was a good choice for Chris. The Keith Urban track isn't forgiving to Chris' early pitchiness and there's a flatness to the entire performance. I'll try to pretend that that was intentional, since he's been so animated in the past. I'm still waiting for Chris' voice to sound as good as it did in the first audition.
Melchior, Balthasar and Simon Say: Randy is loving things about everybody and he throws out the in-it-to-win-it idiocy. Who isn't in it to win it, exactly? And what, pray tell, are those folks in it for? The chance to be used as cheap labor on future Ford commercials? You're getting boring, dawg. Paula thought Chris adapted well. Simon criticizes Chris' voice as timid and nasally, but says he sold it.
Amazingly, things only got worse. Check out the rest of my recap over at Zap2it, particularly if you're curious about how I worked the Kuleshov Effect into my Idol musings.
Tweet