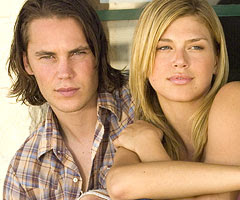 1)Watch "Friday Night Lights" this Wednesday. It's the best hour of network television in the history of the world. That last statement may not actually be true, but "FNL" needs viewers and if I have to resort to excessive hype, I'm willing to do so. If it's good enough for the FOX promo department, you'd think NBC would catch on. In truth, it's the exceptional show's best episode since its pilot -- well-written, marvelously performed and loaded with moments guaranteed to produce man-tears (or woman-tears). No pressure, but if you aren't yelling at your TV set by the end of the episode, you have no soul. NO SOUL.

2)I get worked up by "Friday Night Lights." Nobody got worked up about "What About Brian," which is part of why Monday night's episode was probably the show's last. Boo. I'd say that it was one of my 10 or 15 favorite network shows this season, but you never see networks using "Better Than Average!!!!" as a promo blurb. I wrote more than that over at Zap2it.

3)Kirk Douglas, 90 years young, has a MySpace page. I don't have a MySpace page (I drew the line at Friendster, darnit), but I almost want to join just so that Kirk Douglas could be my MySpace friend.

4)Curt Schilling's new blog 38 Pitches is great, almost on the same level as Gilbert Arenas' blog. Schilling's already getting into flame-wars with fans and reporters and if he's going to have a psychotic break this season, it will probably happen on the blog. As long as he's on the Sox, I like to think of Schilling as one of baseball's great intellects and wits, as well as a gutty warrior. If he goes to another team next season? He'll just be another bum with a bloody sock in his closet.

5)Fans on the Internet are, frankly, weird. They think everybody is watching "Veronica Mars" and get outraged by the idea that a network could potentially cancel such a popular show. They get really worked up over the idea of a movie like "Snakes on a Plane." They're sure they've single-handedly saved shows like "One Tree Hill" by clicking on E!Online polls (the show has really been saved by the fact that Sunkist has taken out advertising space on Chad Michael Murray's forehead). Thus far, pilot resurrection on YouTube, iTunes and BitTorrent hasn't managed to get a single episode of "Nobody's Watching," "Aquaman" or "Global Frequency" onto the air. But maybe someday.

Perhaps a good place to start would, in fact, be with this week's YouTube test case, the Jon Stewart-produced pilot "Three Strikes," about an independent minor league baseball team populated by former stars who have been kicked out of the majors for a variety of infractions. The pilot, was ultimately rejected by Comedy Central and posted on YouTube, is often more coarse and lewd than actually funny, which is why basing your pilot episode around a Sex Boat is a risky thing. I laughed out loud several times, though, and I could see myself watching a few more episodes, if only for the brain-damaged Wave mascot who keeps bumping into things and makes "Yogurt!" into a glorious new catchphrase. While a network is unlikely to revisit a pilot because a couple thousand people gave it four-star ratings on YouTube, Comedy Central may have lower standards.

They seem not to want me to embed "Three Strikes," but you can watch the first episode here and it'll lead you to the next couple parts.

6)Tonight's "Idol" theme: The music that inspired Gwen Stefani. I don't know if I can wait another three hours.
Tweet