Bye, Antonella. It's been, um, swell. 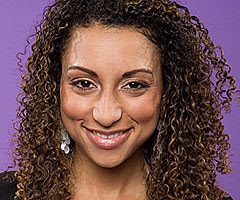 In 10 minutes I'm heading off to a FOX party for the Top 12 American Idol contestants and I have to say that I'm darned sorry Antonella Barba won't be there. I don't have a camera in my phone, but I'm sure I could convince her I did.

Anyway, before rushing off to have a few drinks on FOX and maybe telling Melinda I hope she crushes everybody, I wanted to give my extremely quick reactions to the Top 12.

First off, I know we're supposed to be sad that Sabrina Sloan is gone. We're supposed to feel that the talent pool has been shallowed or something like that. The fact is that while I know the competition is better served having Sabrina rather than Haley Scarnato, I can't bring myself to care one way or the other. Haley's cute, so I'll ignore that her voice is mediocre, but it's not like she's Antonella-bad or Alaina-bad. Maybe she'll find her niche as the competition goes along and shock everybody? Yeah. I'm kidding.

The other contestant who didn't necessarily deserve to be going home is Jared Cotter, who's certainly better than Sanjaya and possibly better than Phil and maybe one or two of the other guys. But just as I can't begrudge Haley's presence in the Top 12 because it's not like she's *awful* I can't get worked up about Jared's absence, because it's not like he's *good*. The competition loses something in Sabrina's absence, but Jared is just another guy who can't sing or perform enough well enough to have been around at all at this point. Once we were only allowed to eliminate two men this week, he might as well have been one of them.

That's just how it goes.

You can check out my other random thoughts on the episode over at Zap2it.
Tweet