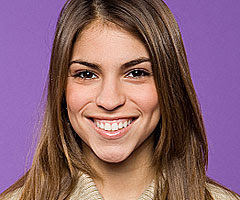 American Idol is all about equality. Even though the men all stink, for example, six of them are making it to the Top 12. Would it be so surprising, then, for the Idol producers to have secretly equipped each of the ladies with a Harrison Bergeron-style microchip designed to emit an electric shock if any of them became too exceptional?

I'm only asking because after two straight weeks of frequently dynamic and exciting performances the American Idol Top Eight Women caught just a touch of the Man Disease on Wednesday (March 7) night.

Singer: Jordin Sparks
Song: "Heartbreaker"
My Take: If any of the women were going to do Pat Benatar, wouldn't you have figured it would be Gina Glocksen? Anyway, the first note from the band is like a gunshot and Jordin's just racing along trying to keep up. Sometimes she's right on the beat and sounds fantastic, other times she's worried on the verge of getting lost, tentative and a bit shrill. She has just enough sass to sell the rough parts, but there are several bum notes.
Simon, Crackle and Pop Say: Randy points out that it's a different show when the girls perform (somebody should warn him that that won't be the case next week). Paula thinks Jordin is exploding into her own artistry. Simon found it a bit manic, but he's sure she'll still be around.

Singer: Sabrina Sloan
Song: "Don't Let Go"
My Take: The danger of doing a group song -- like this En Vogue track -- is that instead of feeding off of the energy of the people around you, you're forced to build off a few random background singers who aren't as invested in your success. Perhaps that's why Sabrina takes so long to lock in. She can't quite find the melody at first and she plods along. By the halfway point she starts shouting and eventually she moves into singing. In isolated moments, she's very good, but not overall.
Simon, Crackle and Pop Say: Randy thought it was solid, but not her best. Paula says Sabrina can sing, sing, sing. Simon insists it was robotic compared to Melinda, Lakisha and Stephanie.

Singer: Antonella Barba
Song: "Put Your Records On"
My Take: In addition to being a mediocre singer, we now know that Antonella is a mediocre violinist. There's an inherent nostalgic sweetness to Corinne Bailey Rae's song that's completely at odds with Antonella's wannabe-brassy voice. The notes that should be lilting and soft are just loud and the lower notes get lost in a register Antonella doesn't possess.
Simon, Crackle and Pop Say: Randy thought it was pitchy in the beginning, but that she was only OK. Paula endorses the song choice. Simon lets out a deep sigh and announces, "You've gone as far as you can go, Antonella." He also becomes the first person to mention her dirty picture scandal on-air, praising Jersey's finest for keeping her chin up amidst the media coverage. He ends with, "I just wish you could sing better." This would be a good time for humility, Antonella doesn't have it in her. Instead, she says that she isn't trying to be like any of the other singers in the competition and they aren't trying to be like her. Oooh. Oooh. Who wants to be the one to explain to Antonella why the other girls aren't trying to be like her?

Singer: Haley Scarnato
Song: "If My Heart Had Wings"
My Take: Haley, apparently a former gymnast, should have come out on-stage in a leotard, done two or three flips and then yelled, "Superstar!" At least then people would have remembered who she is. Instead, she's just that really cute girl with the great shoulders who didn't realize that Faith Hill songs aren't so easy to sing.
Simon, Crackle and Pop Say: Randy wasn't jumping up and down. He wanted some "Wow!" and some "Pizzaz!" and some "Yo!" Paula says she sang it well and looked great. Simon says it was horrible, like "some terrible, ghastly high school musical" performance. Then Simon admits he doesn't remember Haley's name. Unlike Antonella, Haley is able to just nod and accept there's no point in fighting.
Check out the rest of my recap over at Zap2it to find out who I liked best tonight. Here's a hint: Her name rhymes with Shelbinda Slewbittle.
Tweet