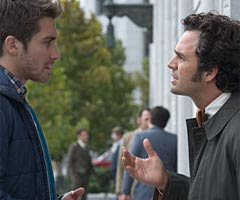 "Zodiac"
Director: David Fincher
Fien Print Rating (Out of 100): 75
In a Nutshell: This posting is being written as I sit in the San Francisco airport killing time before my already-delayed flight back to Los Angeles after an absolutely wasted weekend at San Francisco's WonderCon (Memo to Event Organizers: If New York ComicCon is gonna crush you again next year, you either want to schedule a new date, or you probably shouldn't count on Zap2it coverage). But the reason why the weekend in the Bay Area wasn't wasted is because there couldn't possibly be a better place to have caught Fincher's new serial killer drama.

The Zodiac Killer was front-page news all weekend in the San Francisco papers and first segment-worthy on the local news. This was just a good way to get perspective on why Fincher felt the story was worthy of being a 160-minute film -- the Zodiac's legacy is still strong in San Francisco. People of a certain age still vividly remember the fear and discomfort and paranoia they felt 35 years ago. That provides the complimentary scope that Fincher's film is somewhat lacking.

"Zodiac" is an absolute triumph of big-screen filmmaking and a triumph of a very specific kind of screenwriting. In many ways, I'd compare James Vanderbilt's script, based on the book by Robert Graysmith, to the job done by William Goldman adapting "All the President's Men." The major difference is that Goldman's script had a built-in satisfying, happy ending. Vanderbilt isn't so lucky. What he's done, though, is written a movie that is remarkably thorough and remarkably dedicated to procedure and process. Many people have correctly called "Zodiac" a movie about obsession, but I'd say that it's actually a movie about the things obsessed people *do*.

I think there's a difference, because while Mark Ruffalo, Jake Gyllenhaal and Robert Downey Jr. are perfectly serviceable leads and do fine work, the character study of obsessed people doesn't go an iota deeper than "When people get obsessed, their regular lives get torn apart." There just isn't enough time to really get to know any of the three main characters, so their development is only articulated to the degree that the actors are able to suggest it, which they do by amplifying their standard acting tics. That's why Jake becomes more doe-eyed as the years pass, while Ruffalo becomes more mumbly and Downey becomes more twitchy.

The number of recognizable supporting players is distracting, and I guess I liked John Carroll Lynch and Brian Cox best from the character pack. I liked the combination of Ione Skye in a bit part, complimenting Fincher's earlier use of her daddy's fabulous "Hurdy Gurdy Man."

It's only March, but I can't imagine Harris Savides' cinematography -- lovely yellows, greens and oranges and POV work -- not being worthy of an Oscar nomination. Ditto with Angus Wall's editing, which deserves much of the credit for never letting the movie bog down despite the absence of traditional dramatic story momentum.

I still prefer "Seven," though. Does that make me evil?

Grumble. I hoped that by writing long, my plane would magically arrive.
Tweet