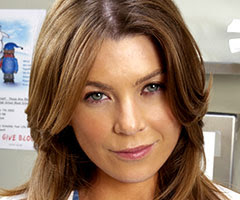 I need to mention this because I'm not sure I've seen it mentioned anywhere else and what's the point of having a blog if you can't mention the things that amuse you/worm your way into your head and won't get out:

Tonight's episode of "Grey's Anatomy" was directed by Tamra Davis. You might know Tamra Davis as the director of the, um, "classic" rap film "CB4" or the Adam Sandler "classic" "Billy Madison" or, perhaps, the stoner "classic" "Half Baked." [She's versatile. No doubt about that. Lots of good TV stuff on her resume, actually.] Alternatively, you may know her as the wife of Beastie Boy Mike D.

But if you're noticing that she directed tonight's "Grey's Anatomy," the only context it's important to know her from is through her previous collaboration with "Grey's" creator Shonda Rhimes. You've probably forgotten that Rhimes wrote and Davis directed the Britney Spears vehicle "Crossroads." And that reunion makes me giggle, particularly with the episode airing the week Bald Britney exited rehab. Why didn't ABC play that up more? Geez.

I have little else to say about this week's episode except that the "Grey's" writers have been clumsier than usual lately when it comes to cases that symbolically echo the lives of the doctors, or cases that are unified by a common theme. This week? All about bones, shaving them, being covered by new ones, having infections spreading through them. From what I understand, bones are, you know, like a metaphor for rigidity and immobility, making the episode all about people avoiding risk and the relative important of just going forward and accepting that mistakes happen, but you can't go backwards. Or something like that. I ignore the things Meredith tells me in voiceovers. Yawn.

Really, though, I'd much rather discuss the Red Sox moving Jonathan Papelbon back to the bullpen, which is probably the best thing for the team, unless you stop and look at the contenders for the No. 5 starter position. You know who'd be a great 5th starter right now for Boston? Bronson Arroyo. Sigh. Lester's the best bet in the long run (and the feel-good story, what with beating cancer and all), but my temporary vote is for Baseball's Ugliest Man, Julian Tavarez. He's a brawl waiting to happen and if Major League Baseball weren't screwing me out of my Extra Innings package, I'd be looking forward to watching the lunatic.