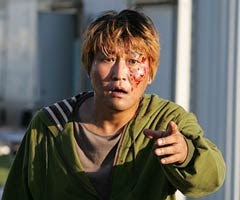 "The Host"
Director: Bong Joon-ho
Fien Print Rating (out of 100): 70
In a Nutshell: "The Host" is so solid and seemingly effortless a piece of popcorn filmmaking that more than a few viewers -- this one in particular -- will walk out of this South Korean monster movie wondering why Hollywood can't seem to master the same craft. Some over-eager fanboys have attempted to hype Bong Joon-ho's latest film as something that transcends its genre, a claim that I don't think I'd make. Why bother? Is there anything so wrong with making an effects-heavy creature feature that manages to mix simple scares with unexpected character humor? It can probably be debated whether "The Host" is the best "Godzilla" movie ever made, but it's most certainly the movie Dean Devlin and Roland Emmerich *wanted* to make when they attempted to reboot the giant lizard franchise nearly a decade ago. That "The Host" was made for only $10 million is all the more reason why Hollywood studios should be desperate to bring the director stateside.

Like most good monster movies, "The Host" is peppered with social commentary, aimed pointedly against both the Korean government and the pervasive imperialism of the United States, but none of the satire is over-articulated. Really, the movie is about a giant many-armed creature that lives in Seoul's Han River and takes a particular interest in a dysfunctional family forced to band together to rescue one little schoolgirl. Critic Colin Covert is being blurbed comparing "The Host" to a fusion of "Jaws" and "Little Miss Sunshine," an analogy that I like so much I won't try to top it. I would go so far as to say that "The Host" is a much funnier movie than "Little Miss Sunshine," carried by strong work from stars Song Gang-ho, Park Heui-bong and Bae Du-na [Song also starred in the director's "Memories of Murder," a solidly made rural police procedural.]

The creature -- masterminded by San Francisco's Orphanage FX house -- isn't up to big budget Hollywood standards, but the technology isn't jarringly outmoded either (he looks a bit like the Geico lizard gone feral). I was completely engaged by Lee Byong-woo's score, which has more classic film influences than I can count, and a rumbling and effective (rather than just loud) sound design.

"The Host" is intense, but never gory enough that it becomes unpleasant or uncomfortable to watch and whenever things become too scary or emotional, Bong isn't averse to tossing in a pratfall or mugging character actor to return the focus to the fun.
Tweet