MovieWatch: "The Assassination of Jesse James by the Coward Robert Ford" 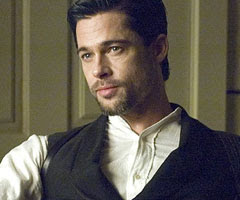 "The Assassination of Jesse James by the Coward Robert Ford"
Director: Andrew Dominik
Fien Print Rating (Out of 100): 76
In a Nutshell: [Here's the part where I apologize for the delay in writing this review, as if anybody has been waiting with bated or baited breath. Premiere week is a busy time. Yes. Boo-hoo. Poor me. Anywho... Back to the review I've been trying to write for nearly a week.]

You'll excuse me while I muse on the fact that Emmanuel Lubezki and Roger Deakins, probably my picks for the best cinematographers currently working, have collectively been nominated for 9 Oscars without a win.

That's a thought I'm only having because I'm musing over similarities between Terrence Malick's "The New World" (shot by Lubezki) and Andrew Dominik's appealingly cumbersomely titled "The Assassination of Jesse James by the Coward Robert Ford" (shot by Deakins), a movie that's almost certainly Malick-esque, though probably more like early Malick than later Malick. The comparison really boils down to an "Ooooh... Pretty pictures" response to both movies, as well as a "Dear Lord is this movie going to tank in Middle America" reaction.

"Assassination" has a robust 160 minute running time, which is almost the exact length that "The New World" was when critics saw it and when it first opened in Los Angeles and New York. By the time it played in theaters and basically tanked ($12.7 million domestic, just over $30 million worldwide), it was just over two hours.

Like "New World," "Assassination" is a piece of historical revisionism, first a foremost. It's an attempt to find something historical in a figure who has basically become an American folk legend (or the fodder for a Disney musical). Like "New World" is also probably more of an art house movie than the studio involved might have initially anticipated.

While "New World" was intentionally alienating in its depiction of the pre-colonialized America, using its seemingly hours of Q'Orianka Kilcher prancing around fields of grain as an image every bit as alien as Neil Armstrong bouncing around on the Moon, "Assassination" isn't at all inaccessible. The narrative is straight-forward and linear and the character progressions make absolute sense. It's an aesthetically lovely movie and an intellectually intriguing movie, but I can't help but wonder if a piece of "New World"-esque trimming might have benefited it. "New World" was never going to be a straight-forward romance or history or whatever Malick and New Line cut it down to being. "Assassination," while often magnificently made, is undeniably self-indulgent as well.

The obvious comparison that I assume everybody is making is to John Ford's classic "The Man Who Shot Liberty Valance," though "Assassination" may give an even more complicated spin on that oft quoted line: "This is the west, sir. When the legend becomes fact, print the legend." The disconnect between the legendary Jesse James (Brad Pitt) and the factual Jesse James (the man introduced to us in Hugh Ross' opening voiceover and throughout) is part of what motivates Bob Ford (Casey Affleck), whose eventual actions are unlikely to shock anybody, but for me the movie got even more fascinating after the event referred to in the title. It's not that I didn't like the supporting work by folks like Paul Schneider, Jeremy Renner and particularly Garret Dillahunt, but their characters often distract from the movie's core focus.

The connection between Ross's narration -- fact-based, dispassionate -- and the imagery in those scenes was perhaps my favorite part of the whole film. They're shot with a distorted point of view, as if through either the lense of an old camera or through the thick, slightly warped, glass windows of the period homes. The voiceovers present the truth over the distortion, a truth that ultimately gets in the way of the legend, the myth.

Pitt's performance as James is similarly hard to read, similarly veering between iconically charismatic and luster-free real. Since I'm assuming that's exactly what Dominik wanted -- an A-list movie star giving a performance that's sometimes showy and sometimes blends into the background -- Pitt deserves his kudos. Ditto with Affleck, whose fall output -- this and "Gone Baby Gone" -- will assure both his stature in the creative community and his anonymity for mainstream moviegoers.

OK. I've got to post this or else it will never get posted and since I hope to catch a couple additional movies this weekend, I may never catch up.

One last thing: It ought to be against the law to waste Mary-Louise Parker as badly as she's wasted here as James' almost dialogue-free wife. There are things Parker conveys successfully through silence, but a lesser actress could have filled the part without causing me to lament the lost potential.