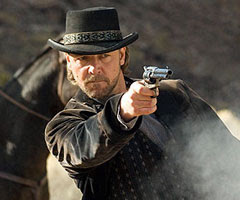 "3:10 to Yuma"
Director: James Mangold
Fien Print Rating (Out of 100): 70
In a Nutshell: Through one game, The Great Randy Moss Experiment of 2007-08 seems to be working out pretty well for the Patriots. Even if he tweaks his hamstring and doesn't feel like trying for another down this season, he's already been well worth a fourth round draft pick. And through one day of post-game interviews, he's said all the right things about how the Pats are a team of supporting players and he's just part of the support, like he's the most expensive jockstrap in New England. And I'm pretty confident that even without Moss, Welker and Stallworth and Watson will be able to catch enough balls on their own. I don't know if that was another jockstrap joke.

As I was writing that paragraph, I was trying to think of a way to use Randy Moss as a clever transitional point into James Mangold's remake of "3:10 to Yuma." It has something to do with how Delmer Daves' 1957 original was already a pretty good movie to begin with (just like the Patriots weren't such a bad football team last year), but that doesn't mean that there's any harm in revving up the engine with a few new supporting parts (that's where Russell Crowe and Christian Bale come in), as long as somebody respectable is at the helm. In that scenario, James Mangold somehow gets wildly inflated into becoming the cinematic equivalent of Bill Belichick. So I'll stop.

Follow through after the bump for my thoughts on "3:10 to Yuma," thoughts that make no mention whatsoever of the presumptive Super Bowl Champion New England Patriots.

There are few Western genre tropes more common and recurring than the lone man standing up for what he knows is right, even if everybody around him lacks his integrity and convictions, and for that reason I've always sortta lumped the original "3:10 to Yuma" in with superior films like "The Ox-Bow Incident," "High Noon" and with moderate tweaking, "Bad Day at Black Rock," which all came earlier. That doesn't mean that "3:10 to Yuma" isn't without merits, particularly in the lead performances by Van Heflin and the evil-against-type Glenn Ford and in its ultra-lean 90-minute running time.

Mangold's film has been expanded to nearly two hours and, as a result, the new "Yuma" lacks the urgency that drove the original. It takes a lot longer for noble rancher Dan Evans (Christian Bale) get the wicked Ben Wade (Russell Crowe) to the town of Contention, where he'll be put on a train to a prison to be hung. My filmgoing companion preferred the original movie's focus on the near-real-time wait for the train, where Dan and Ben test each others' mettle and come to inevitably learn important lessons about what constitutes manliness in the Old West.

Mangold's version muddies the waters by expanding on the Western milieu. He introduces fiercesome Injuns (whose faces are never seen) and he emphasizes the role of the encroaching railroad in the eventual elimination of the West's wide open spaces. The extra time also leaves room for plenty of reminders that Ben Wade is a vicious killer. In the original, Ford's character is insidiously and charismatically bad, but it's easy to fall under his sway. Crowe's character commits acts of violence before our eyes, killing people who skuzzy, but also one or two people who probably deserved to live. Dan's impressionable teenage son (Logan Lerman) says he detects the good in Ben, but it's only Crowe's lively performance (and the character's somewhat ham-handed artistic side) that makes us see what the kid sees.

If Crowe's Wade is more hiss-ably evil in this version, Bale's Dan is more ambiguously weak-kneed. I guess my read on Heflin's character from the original was just that he was a man beaten down by life, nearly out of chances to keep his family afloat. Bale was able to hint that some of Dan's misfortune was self-inflicted.

Extra time has also helped to flesh out four or five supporting roles from the original, giving actual substance to railway man Butterfield (Dallas Roberts), Doc Potter (Alan Tudyk), spectacularly suspect Pinkerton Byron McElroy (Peter Fonda) and, in particular, Ben Wade's right hand man Charlie (Ben Foster). It's hard not to be intrigued by Foster's career choices and he's always engaging to watch, even if his gonzo mannerisms are becoming increasingly familiar. After seeing this movie, "Alpha Dog" and Foster's contribution to the trailer for "30 Days of Night," I have a pretty good idea now of what constitutes a Ben Foster performance. He's becoming predictably unpredictable.

To some degree, "3:10 to Yuma" has been reimagined not as a fast-and-cheap B-movie, like the original, but as a star-studded Hawks or Ford film. Certainly Mangold has kept the Western revisionism to a minimum, aided by Marco Beltrami's uber-Western score and Phedon Papamichael's cinematography, which is full of images of manly men shot from low angles against the harsh natural terrain. This is an old-fashioned story well-told.

[Side note: Was there a reason for the Luke Wilson cameo that comes half-way through the movie? Were we going for a "Hoot" reunion with Lerman? It was needlessly distracting and Wilson's presence didn't add an iota to the movie, so I guess I'm wondering who thought there was a benefit to his being there.]