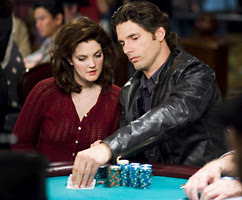 "Lucky You"
Director: Curtis Hanson
Fien Print Rating (Out of 100): 41
In a Nutshell: Hollywood romantic comedies (or dramedies, or whatever) usually only work because the writers, directors and actors collectively bend over backwards to have us love the main characters, or at least root for them to be together. I mean, if you aren't invested in a happy ending between the leads, what are you left with? "Must Love Dogs"? But as bad as "Must Love Dogs" was and as much as I wanted the two main characters to run as far away from each other as possible, you could feel the effort to make them likeable, which was perhaps why they were so very unlikeable. If I'm going to give Curtis Hanson's "Lucky You" credit for anything, it's a willingness to put two romantic leads on screen without any apparent regard for just how distasteful they are as people (the characters), just how little chemistry the two leads (Drew Barrymore and Eric Bana) have and just how unlikely they are to find any happiness together in even the short run. It's amazing (excruciating?) to watch! Given Curtis Hanson's consistent desire to subvert the character expectations of any variety of genres, I can almost believe it's all intentional, all some wicked bluff on Hanson's part.

I've got a wee bit more to say, but follow through after the bump if you care.

"Lucky You" plays that Hanson wanted to handicap himself as much as possible and then see if he could play out. It's odd that Bana's reputation, pre-"Chopper," was as a comic actor, but since he's gone Hollywood, he appears to have lost all of his mirth and warmth, so casting him as a romantic lead (albeit not a romantic comic lead) is one recipe for disaster. Casting Barrymore as a singer (and actually letting her sing on-camera) is another recipe for disaster. And having Horatio Sanz? Well that's just masochistic. And as for the number of professional poker players popping up in the movie? I recognized about half of them, but whenever anybody appeared on-screen looking both unphotogenic and generally uncomfortable, I just assumed it was a pro. Hanson might as well have thrown in some kids and animals just to raise the stakes.

Then you have to give Hanson and co-writer Eric Roth for skipping out on the card-playing cliches that have marred films from "The Cincinnati Kid" to "Maverick" and even infiltrated mostly seemingly savvy card playing movies like "Rounders." There's a minimum of miraculous hands (the finale doesn't come down to somebody's royal straight flush to the ace beating somebody else's straight flush to the king) and once you get past the early rubes, people's tells aren't comic book-y either, nobody licks the filling from Oreos when they're nervous.

The dramatic problem, one that Hanson and Roth have no choice but to embrace, is that the World Series of Poker -- the 2003 WSoP is the movie's centerpiece -- isn't a winner-take-all event. Losers make a heap of money regardless, which plays directly into the ridiculous, and doubly unsatisfying, ending. Without contrivances, the movie's climax is just Bana and Robert Duvall starring back and forth at each other.

I don't know why Hanson and Roth decided to compensate for the lack of narrative cliches by larding up on thematic staleness. I was *shocked* that nobody at the end said to Bana's Huck, "Damn, you go boy! You finally learned to live your life and play poker in the proper ratios, because previously your priorities between poker and life-living were out of order, what with your recklessness in the former and your cautiousness in the latter." Because folks sure kept repeating the subtext earlier.

Is it any wonder Warner Bros. pushed the film's release date over and over and over before finally just burying it? Then again, what did the studio think it was bankrolling?

After an improbable winning streak that included "L.A. Confidential," "Wonder Boys," "8 Mile" *and* an episode of "Greg the Bunny," "Lucky You" represents Hanson's second dud in a row after "In Her Shoes," which some people actually liked. Not necessarily anybody I know personally, mind you, but they're out there... I still like those three winners enough that I'll keep seeing Hanson's movies.

Better not to waste too much time on "Lucky You," but since it made its way to me through Netflix...
Tweet